Sometimes, a story is right in front of your eyes and you just happen to miss it. Alas, I find this minor subplot partly interesting and partly humorous.

Back in June, the Sixers made headlines by starting to call their arena “The Center.” This, of course, wasn’t just an attempt to create a catchy nickname a la “The Q,” although the team would likely welcome that result. No, this was a business decision, a refusal to call the building “Wells Fargo Center” when the team isn’t affiliated with the bank.

Apparently, there is an NBA rule that the arena name has to be on the court. Can you spot it in this pic released a few weeks ago (via our pal Derek Bodner)? 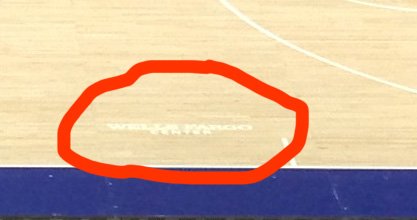 There you have “Wells Fargo Center” in all of its glory, sports fans. On another note, can the season start already?