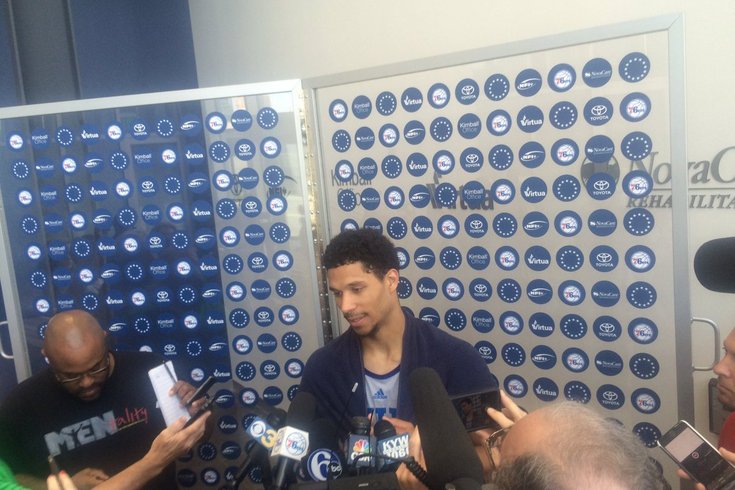 Josh Hart worked out for the Sixers on Thursday in Camden.

The Sixers have two workouts scheduled On Thursday at their practice facility in Camden. The only lottery prospect of the bunch will work out later today all by himself, and that is Kentucky guard Malik Monk. I imagine he’ll make a few jumpers.

For the group workout in the morning, there were a couple of legitimate second-round prospects that the Sixers could select during next Thursday’s NBA Draft. The players who worked out are:

Considering that Ennis played a couple of years on those awesome Villanova teams with Hart and Reynolds, the Wildcats were very well-represented. Jay Wright was in the gym as well.

“That was very weird,” Reynolds said. “Then you add in Coach Lange [Billy, former ‘Nova/current Sixers assistant] to it. But it was comfortable, I’m glad my first one was with some guys I knew, some familiar faces.”

Here are some of the other things we saw at the Sixers morning workout:

•    The two potential second rounders are Hart and Brooks, projected to go No. 42 and 44 in the latest Draft Express mock draft, so rightfully they will receive most of the attention. Let’s start with the local guy, who didn’t shoot the ball all that well for the second straight year at his Sixers workout.

Hart, who shot 40 percent from deep en route to All-American honors this season, readily admitted that his shot was a bit off on Thursday. But he did say that shooting is one of the areas that he has been focusing on since Villanova’s season ended.

“Just changing my jump shot, being more fluid, more consistent with that, get better range” Hart said. “Handling the ball better, if need be being a combo [guard] that has to bring the ball up at times.”

•    Fairly meaningless workout aside, I’ll be very interested to see how Hart does as a professional after a great career at Villanova. Reading Kevin Pelton’s draft projections over at ESPN Insider, Hart grades out as the eighth-best player according to his statistical model. That doesn’t surprise me, because Hart contributed in a bunch of areas and was super-efficient throughout his four-year career.

•    On the other hand, Brooks did shoot the ball pretty well from the full-court 3-on-3 that we got to watch. Like Hart, he worked out for close to half of the NBA. Here is what Brooks said when asked about he could fit in with the Sixers.

“Just scoring off the bench, high-motor guys can fit in a lot of places,” Brooks said. “I love the city. I walked around here, this was my first time being here so it was great, a lot of history in this place. Just feeding off Embiid and Okafor and those guys and trying to find a way to score and get baskets.”

Darryl Reynolds with a nice putback dunk at the Sixers AM workout. pic.twitter.com/X5m7w7DsOm

•    Ennis was the most popular guy in the gym, because of the ‘Nova connection and also making the Final Four with Brooks at Oregon. He was also the most vocal player on the court.

•    Great deadpan delivery from Hart when asked what he expects to happen to him at the draft next Thursday.

“To be the number one pick, that’s probably what I’m hoping for.”

We’ll be back later today to report on how many jumpers Monk can make in an empty gym. With his beautiful shooting stroke, I’m actually kind of looking forward to watching him.