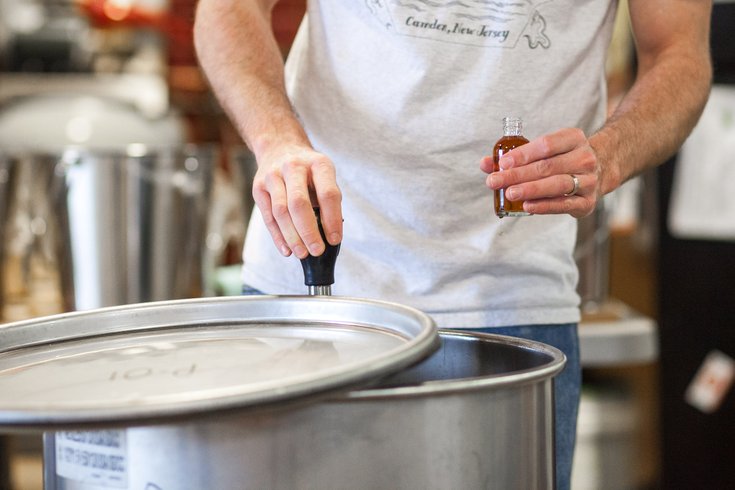 Founder and chief distiller James Yoakum fills a small tasting bottle of his 86-proof rye whiskey on the morning of Friday, March 25, 2016.

In fact, the first legal distillery in Camden – and only the second newly licensed distillery in New Jersey since the repeal of Prohibition – pretty much makes darn small batches of everything.

His bottling line – “the highest tech thing we have” – is just four bottles long.

He and distillerymen Dennis Petrakis and TJ Kaplan, accompanied by foot-stomping country tunes, were able to bottle his first rye whiskey in less than an hour.

The small run explains why half of his first release of rye, bottled Friday, is already spoken for, even though the official sale date is April 1.

The entire batch of Cooper River Distillers' Garden State Rye Whiskey was just 84 bottles, pulled from a single 15-gallon barrel. The small barrel was chosen to accelerate aging with more wood and char contact, meaning it spent just a year in the barrel.

Another batch is resting but won’t be available for sale until June.

JaYo, as he sometimes calls himself, has patiently awaited the release of his first rye whiskey since opening the doors of his distillery in April 2014.

The Wharton Business School graduate, after all, is a native of America’s home of brown liquor, Kentucky.

As he awaits his own bourbon to come of age sometime in early 2017, he’s pretty pleased with his coppery-brown rye, the original American whiskey.

It has a mild spice and smoke flavor to it, imparted by the direct flame on his hand-hammered copper still, crafted in Spain and also imparted by the heavily charred small barrels.

As long as it took to age the rye, it took longer still for Yoakum to cut through the bureaucracy to gain state approval for a craft-distilling license and Camden's greenlighting of his setup in a rehabilitated garage with the RiverLine train rumbling by his front door in downtown Camden.

A Realtor when he started, he’s had enough early success that distilling is now his day job.

He did that by committing to making rum first, a process that takes less than three weeks to produce clear rum.

That allowed him to start making an income right away. And by also aging rum, imparting more flavor by barreling the rum, he learned about aging whiskey.

In fact, his whiskey barrels will be repurposed to age rum. 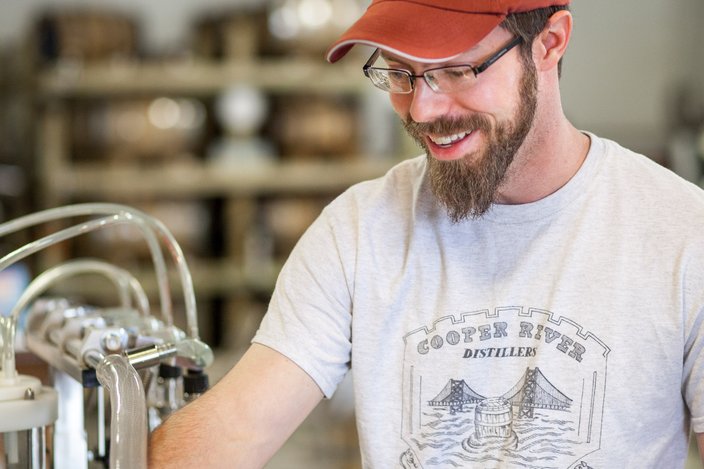 Yoakum’s rye has some Jersey roots. While the rye grain was grown in Indiana, a Jersey farm produced the seed. His blend is 63 percent rye.

Some “rye” is just the 51 percent required by law, some 100 percent. Jersey-grown corn accounts for 23 percent of his mash, and malted barley is 14 percent.

Bourbon, on the other hand, must be primarily corn, though the other grains are also present, so there's a correlation.

Yoakum came to Camden because the state allows him to sell on-site and directly to bars and restaurants, an impossible arrangement in Pennsylvania. His wife worked in a Camden charter school.

In fact, the ceremonial first bottle of rye will be auctioned off to help buy books for a school.

“The city has character,” he says of Camden. “When I’m selling in Hoboken, they may not be interested in my rum, but they want to hear the story of Camden.”

His rye came out of the barrel at 106 proof, too hot for a palate to catch the full flavor of his blend, so his product was proofed down to 86.

He says it's just fine to pour straight up, but a few cubes of ice are OK, too.

But where rye shines is cocktails, classic American cocktails, like Manhattans.

While rye has gained a cachet with hipsters, simply because it seems new again, it's “cocktail nerds” who have driven the demand for rye, Yoakum says. In Pennsylvania, Manatawny Still Works in Pottstown is riding the same demand for artisanal cocktails.

Locally, much of his business comes from the Camden County Prosecutor’s Office, which is around the corner, and Rutgers University-Camden, a few blocks away.

The business is open to the public for cocktails and bottle sales on Fridays from 4 p.m to 8 p.m. and Saturdays from 1 to 8 p.m.

“Stay tuned,” he said. “We’ve got fun stuff in the pipeline.”