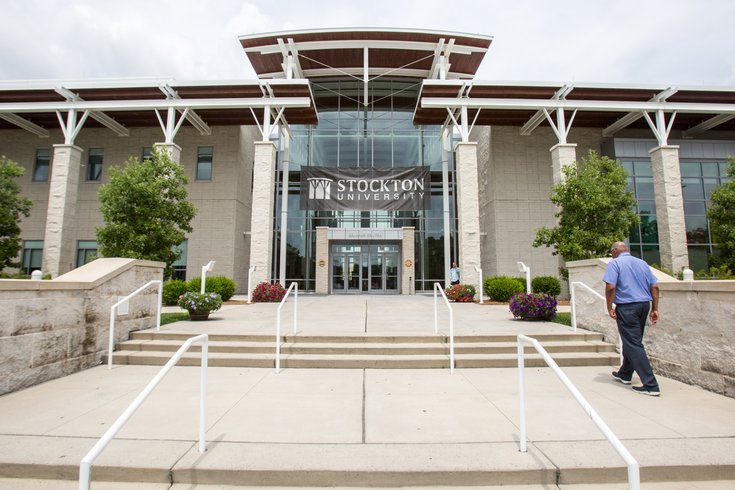 The entrance to the Campus Center at Stockton University in Galloway, NJ.

A Stockton University student who allegedly raped another student in her dormitory and posted video recordings of the attack on Snapchat still hasn't been charged by authorities, a federal lawsuit claims.

The woman accuses the man, a 2015 graduate, of raping her inside her dormitory on two separate occasions during February 2017, according to the lawsuit. Images of the woman both nude and wearing just her underwear from the second incident of assault were allegedly posted to Snapchat for the public to view for 24 hours, the suit contends.

The accused, a former member of the fraternity Pi Kappa Phi, was charged with invasion of privacy in April, and that charge is pending. He was never charged with sexual assault.

The second of the two sexual assault incidents allegedly took place on Valentine's Day in 2017. According to the lawsuit, the accused came to the victim's dorm that night with alcohol and allegedly spiked the victim's drink while she was using the bathroom.

The woman woke up the next morning "naked, confused, choking and covered in vomit," the lawsuit said. She later checked her phone and saw three Snapchat stories of herself from the night before — in one video wearing her bra and panties and in another completely nude being assaulted.

The victim immediately reported the incident to local police, Residential Life officials at Stockton University and the university's Title IX coordinator. She was later taken to AtlantiCare Regional Medical Center in Atlantic City for a rape kit, which turned up the accused's man's DNA, the lawsuit alleges.

The lawsuit also alleges the victim asked the man to take down the Snapchat stories in a text message. But he only took down two of the videos and left up a video depicting him "sexually assaulting the Plaintiff's vagina" for public view, the lawsuit states.

This was not the first incident involving the Pi Kappa Phi fraternity at Stockton, the lawsuit claims. According to a university website, the group has not been officially recognized by the university since 2010 and does not adhere to university regulations for fraternity or sorority groups.

The woman is seeking damages for psychological and emotion distress, depression and damage to her reputation.

"She's emotionally traumatized," Fuggi said. "It's going to take time for her to reclaim her life."