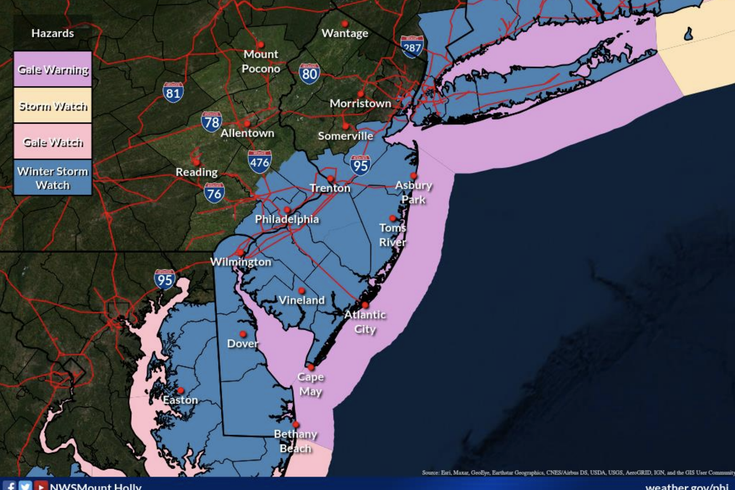 A nor'easter moving up the Atlantic Coast will reach the Philadelphia region and Jersey Shore on Friday night. It will bring heavy snow and strong winds to much of the area, according to the National Weather Service. The most snow will fall at the Jersey Shore, where areas could get between 10-18 inches. Philadelphia is forecast to get between 3-7 inches of snow.

Following frigid temperatures, the Philly region will bear the brunt of a snowy nor'easter at the start of the weekend, with snowfall predictions ranging from 4-6 inches in Philadelphia and the Pennsylvania suburbs, 8-12 inches further east in South Jersey and 12-18 inches down the shore.

Along with the snow will come strong winds. In South Jersey and southern regions of the Poconos winds will blow at 20-25 mph with gusts of 40-50 mph, a separate NWS briefing on Thursday said. This could result in tree and power outages. It will also produce dangerous wind chills and blowing and drifting snow could make driving dangerous, especially closer to the shore.

Temperatures already were in the teens on Thursday morning across the region and overnight Thursday will be in the mid-20s, meteorologists from the National Weather Service's Mount Holly office said.

There is still uncertainty about the storm, and snow totals have been changing. Forecasters do know the storm is forming off the southeastern coast of the U.S., and it will be powerful. A big drop in barometric pressure over the region will create a bomb cyclone or as 6ABC' described it, a "winter hurricane."

If the storm tracks further west, Philadelphia and its immediate suburbs will get more snow. If it tracks further east, the highest totals will be around the Jersey Shore, where there could also be minor coastal flooding. The eastern track is more likely, NBC10 reported.

NWS predicts the I-95 corridor may serve as a dividing line in the storm, with areas to the east getting more snow while areas on the west getting less.

The freezing weather has officials taking making preparations, like Camden County officials, who enacted a Code Blue advisory through the weekend. The county will operate warming centers for anyone in need.

It will warm up slightly on Thursday and during the day on Friday, with high temperatures around the region in the mid-30s, prior to the storm's arrival.

NWS estimates that between Friday and Saturday there will be 3-7 inches of the snow in Philadelphia; 2-6 inches in Media, Delaware County; 2-5 inches in West Chester, Chester, County; 3-6 inches in Doylestown, Bucks County; and 1-3 inches in Pottstown, Montgomery County. In New Jersey, the forecast calls for 5-11 inches in Evesham, Burlington County, and 10-18 inches in Atlantic City.

Here is the NWS forecast for Philadelphia through Monday: