Philly, Pa. people get in on Mannequin Challenge (just admit you don't know what it is) 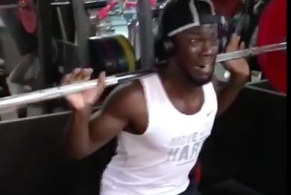 Who would ever have thought that a viral trend could be as unbelievably trifling as standing stock still and doing nothing at all?

Inspired by the world famous "Frozen Grand Central" video from 2008, eight years later, people all over the place are getting in on the #MannequinChallenge. Here's the original work of art.

And here's what's going on today — not to be a jerk store about it. Some of these are pretty great.

I killed this #mannequin #challenge pic.twitter.com/iYH5Idg0kS

You get the idea. Plenty of celebrities and locals have gotten in on the act, too. Here's Kevin Hart's take.

And the Penn State football team.

Word is the Sixers and Philly fans also did it at Monday night's sixth consecutive loss to start the 2016 season.

Video has yet to surface, but this mean joke did.

76ers have fans perform the mannequin challenge. The team has been frozen at 0 in the Oct/Nov win column since 2013.

Here we have a politically uncharged Mannequin Challenge.

That thing where instead of checking 538 you get recruited for a mannequin video while canvassing Philly. pic.twitter.com/Pq0R4cBGEX

This one involves an actual mannequin.

Mannequin going for a swim outside Shop Rite. #philly pic.twitter.com/Hivg2tl8XH

And sorry, Eagles fans, but the Cowboys deserve credit where it's due.

This could be around for a week or a while. Watch out, Madame Tussaud.