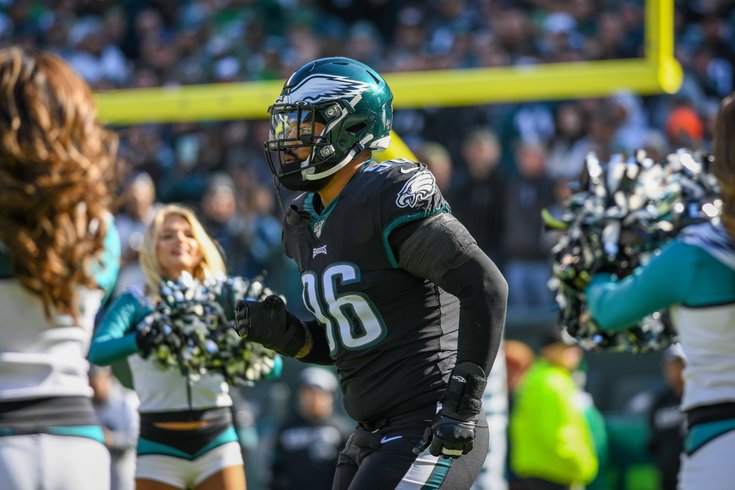 According to a source, the Philadelphia Eagles intend on exercising their fifth-year option on defensive end Derek Barnett, like they did last offseason with Carson Wentz, and with Nelson Agholor in 2018.

On the other hand, Barnett, who is still only 23 years old, has made his share of huge plays in big moments, and the coaching staff loves him. They praise Barnett any chance they get, often citing his toughness and work ethic. In my view, while his numbers aren't great, Barnett has improved his repertoire of pass rush moves, and believe that he is a prime breakout candidate in 2020. We'll see. ¯\_(ツ)_/¯

But as far as exercising his fifth-year option, there isn't much of a downside to it.

What is the fifth-year option?

In 2017, Barnett was drafted 14th overall, so he would fall into the latter bucket. Last offseason, the cost for exercising a fifth-year option for a defensive end in the 11-32 range of the 2016 draft class was $9,451,000. That will likely rise a bit this offseason for the 2017 first-round draftees.

This is the last year in which that caveat will be the case. Beginning next offseason, with the 2018 draft class, fifth year options will be fully guaranteed the moment they are exercised.

Got it? Yes? No? Well, anyway, moving past the nerd stuff...

So should the Eagles exercise Barnett's fifth-year option?

I mean, yes, I just said they should, but I'll explain further.

You may be asking, "Will Barnett be worth around $10 million in 2021? Is he really worth the average of the third- to 25th-highest salary in the NFL at the defensive position?" To be determined, but that's not the way to look at it.

The benefit is that the Eagles would keep him under their control for an added year, and with Barnett having finished his third year in the league, the Eagles would be eligible to negotiate a contract extension at a time when his long-term cost could be reasonable, should Barnett be open to an early extension.

The only real risk the fifth year option presents is if Barnett either regresses or stagnates, and then also sustains a serious injury during the 2020 season that would carry over into the beginning of 2021. Without the injury, they could simply release him prior to March of 2021, and would not be on the hook for the fifth-year option at all. With such an injury, they'd be on the hook for the $10-ish million.

But certainly, the benefit of keeping Barnett under the Eagles' control for the added year outweighs the risk of a precipitous drop-off in play, plus a devastating injury.