Are the Eagles really a 'quarterback factory?' A look at Howie Roseman's QB history 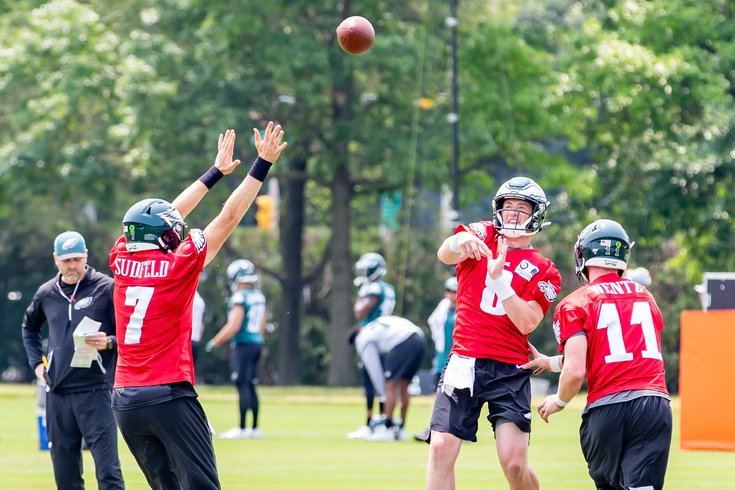 Clayton Thorson at an Eagles OTA.

The Eagles drafted Jalen Hurts in the second round of the 2020 NFL Draft on Friday.

The decision to spend so much draft capital on a quarterback, who will simply serve as the backup to Carson Wentz, made very little sense for a team committed to their franchise quarterback for over $100 million. But, in a news conference following the pick, Eagles GM Howie Roseman tried to justify making the selection (and foregoing other needs like safety, linebacker, pass rusher, and so on.)

“For better or worse, we are quarterback developers," Roseman said. "We want to be a quarterback factory. We have the right people in place to do that. No team in the National Football League has benefitted more from developing quarterbacks than the Philadelphia Eagles.”

The line was immediately taken out of context and became a joke on twitter. Our own Jimmy Kempski brilliantly even turned the sentiment into a work of art:

Nick Foles ascending to heaven and Matt McGloin being immediately incinerated is hilarious — clearly — but we couldn't help but wonder if the statement was even close to being correct.

We took that as a challenge, and we decided to look back at every quarterback Roseman acquired since he took over as GM of the Eagles in 2010. With the list assembled below, we wanted to see if, after each quarterback arrived, they got better (or were better after they left). And we wanted to see if they got anything for the QB when the player left, which might be the outcome the Eagles are banking on with Hurts.

Kolb never panned out with the Eagles as he was first behind Donovan McNabb, and then behind Michael Vick. He wasn't technically acquired by the Roseman regime, but the Roseman regime was in power when he left. Somehow, Roseman turned Kolb into a second rounder and cornerback Dominique Rogers-Cromartie, who was a very good defender at the time. This one has to go down as a win for Howie.

Vick was originally acquired as a project (and perhaps a bit of a publicity stunt). But after showing very little when he was on the field in the Wildcat formation, Vick ascended to the starting role in Philly and his career was revitalized. It's hard to argue that Vick didn't get better while he was an Eagle. He eventually lost his starting job due to injury and to Nick Foles and signed as a free agent with the Jets.

Kafka was drafted to be a third stringer after a great career at Northwestern. He threw 16 career passes for the Eagles and was cut to make room for Trent Edwards after two seasons.

Young was on his way toward being washed when he joined the Eagles 'Dream Team' in 2011 to be McNabb's back up. At age 28, the former college star started three games and went 1-2 for the Birds. He never played football again after that.

Edwards threw two NFL passes as an Eagle. It was his last NFL roster spot.

Foles is probably the most legendary player in Eagles history. He threw seven touchdown passes in a game, had one of the best seasons in NFL history, left and returned to win four playoff games including a championship win over Tom Brady and the Patriots. The first time, they traded him away and got Sam Bradford (who was eventually used to turn a profit). The second time he won the Eagles their first Super Bowl ever (and when he walked away, the Birds got a compensation pick which became Davion Taylor). Howie got this one right. Twice.

Barkley was never good as an Eagle, and he was traded away for a seventh-round pick after being taken in the fourth. Not the best return on investment.

Sanchez, like Young before him, was more or less washed up when he came to Philly — though he did start eight games and go 4-4 in 2014 (before going 0-2 in 2015). He actually was traded away, but the conditional seventh rounder never conveyed, making him a thumbs down.

Bradford was acquired via trade in shocking fashion by Chip Kelly in 2015 for a fourth-round pick, a second-round pick and Nick Foles. They paid what at the time was a high price, but after "Sleeves" played one full season for the Eagles, the team (once Roseman overtook Kelly for control) was able to flip him for a first-round pick from the Vikings (that became Derek Barnett) as well as a fourth. The trade made room for Carson Wentz. We'll credit Roseman with cashing in on Bradford before his career fell apart.

Tebow was signed as a free agent, played a bit in the preseason and never made the team. It was fun but kind of a pointless exercise.

The Eagles claimed Morris off waivers before releasing him two weeks later to make room for QB Thad Lewis. Morris re-signed with the Eagles practice squad a day later but by the end of the season was a member of the Colts.

He never appeared in a game for the Eagles.

*Tebow, Lewis and Morris, as our Eagles writer Jimmy Kempski says "happened during the year Howie was sent to storage closet B. He had nothing to do with those."

We won't waste your time. Roseman invested several picks in Wentz, who turned out to be a franchise QB. This was a win.

Daniel was signed to a three-year, $21 million deal. He was cut after one season.

Murray was a former fifth round pick Doug Pederson added to the practice squad. He never played in a game.

A camp arm that never made the team.

He never played in a game and was cut.

Sudfeld probably gets an incomplete grade. He has briefly appeared on the field and has shown glimpses in camp — but he remains on the roster and could lose his backup job to Jalen Hurts. If the team can flip him for anything it could be a win as he was signed as an undrafted free agent.

He never made the team.

Also never made the team

Never made the team

Kessler was pretty bad in training camp and in the preseason before an injury thwarted any chance that he'd replace Sudfeld on the 53-man roster. He was cut.

McCown was a great leader in the locker room and hit the field in the playoffs after Wentz was knocked out by Jadeveon Clowney. He is either going to retire or walk away for a new opportunity. Since he came out of retirement to take the job and DID contribute — both on the field and as a veteran voice in the QB room — we won't knock Howie for this signing.

Thorson is a big thumbs down. He was a draftee who didn't make the roster and later signed with the Cowboys.

A camp arm who is yet to make an impact — but since his Eagles career has yet to be finished, he gets an incomplete too.

A shocking pick in the second round, we'll see if the Eagles can make good on the latest ingredient to enter their "quarterback factory"

The Eagles added undrafted free agent Tate from Arizona this weekend. He will be a camp arm.

So let's see — that makes 28 QBs to enter Roseman's "Quarterback Factory." We will cut him some slack and discount the three Chip Kelly signings. That makes Roseman added seven QBs who turned a "profit" (if you include both Foles stints) — which is what factories are meant to do. That is a 28% success rate. If we eliminate the question marks who have yet to leave the "factory," the Eagles have a 32% success rate.

Is 32% success at quarterback development good in the NFL, with such importance and so many failures at the quarterback position every season? It most definitely is better than a bevy of other franchises, like the Browns...

Eagles fans can only hope Hurts somehow, someway earns a thumbs up after his stint with the Eagles concludes.