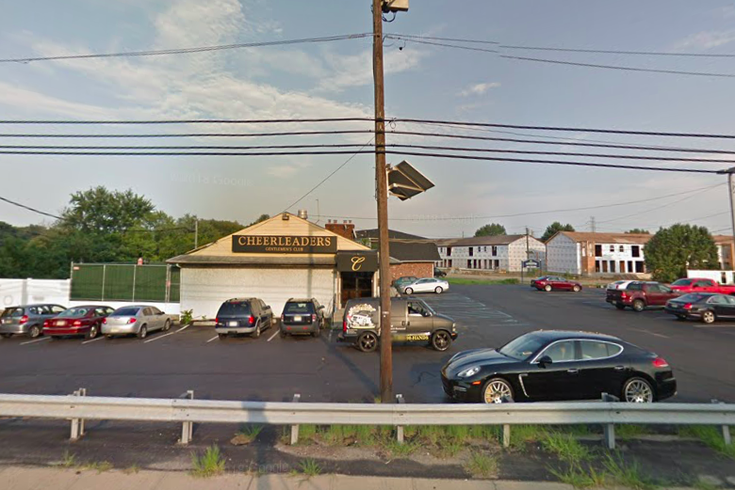 Gloucester City (Camden County) Police responded to a call at a local strip club after a patron was unable to pay for $150 worth of lap dances he'd already received.

When it comes to strip-club etiquette, there are many rules that should not be breached lest ye get escorted from the premises. Some are so basic that they needn’t be spoken aloud, though; they’re inherently understood.

This story is about the latter. Namely, that the customer is required to pay for services rendered when asked to do so. Often, this happens before said services are provided, but sometimes, the fiduciary exchange does not occur until afterwards.

Which brings us to Cheerleaders Gentleman’s Club in Gloucester City, Camden County. If this establishment (but not its location) rings a bell, it’s because its same-named sister club is located about five miles west across the Walt Whitman Bridge in South Philly.

It was still the first half of the Eagles/Saints game at 5:18 p.m. on November 18 when Gloucester City Patrolman Ben McKinney responded to the club for – per police reports provided online by his department – a “theft of services complaint.”

Turned out that a 45-year-old Clementon man found himself in the precarious position of facing a $150 bill for six lap dances without adequate funding to cover this bill.

“The male was found to have only $11.00 on his person,” read the report about this sordid mess. “The management of the club was informed of their options and no criminal charges have been filed. The male is no longer welcome at the club.”

The man's name was not released as he wasn't formally charged with any crime. We’re guessing he had no friends willing to kick in a few bucks, or an ATM card with access to an account with legal tender to hand to his lap-dance provider.

We’ll likely never know more details – songs playing during his lap dances, his demeanor, etc. – as officials at Cheerleaders didn’t respond to requests for comment. (Were you there? By all means, drop a line as we'd like to know more about it. Your anonymity will be protected.)

Lt. Stephen Burkhardt, spokesman for the Gloucester City Police Department, noted that calls like this are rare for the location.

"We actually field very few calls at this establishment in general, and I don’t recall ever having a theft of services complaint such as this one,” he said. “My impression is that a combination of intoxication and getting caught up in all the excitement, coupled with not being required to pay up front, led to his lapse in judgment.”

Burkhardt noted that there was a happy-ish ending to this tale, at least from a moral and/or make-good-on-obligations perspective.

“He did offer to return the following day to pay the bill," Burkhardt shared. "However, we haven’t heard if he did so.”