How has the DNC impacted Philly strip-club industry so far?

Club Risque went out of its way to advertise its DNC specials to conventioneers in the city this week.

As Philadelphia prepared to host a Democratic National Convention, civic cheerleaders touted the potential financial gains that local businesses could reap, most notably in the hospitality and restaurant/bar communities.

Stories out of Cleveland during the Republican National Convention noted that while it was an overall bust in that regard, male escorts made quite a bit of coin, but strip clubs thought they’d do well, but didn’t.

On Tuesday night – when Bill Clinton was wrapping up his year-by-year celebration of the Democratic presidential nominee’s life work – I decided to conduct a half-hour investigation as to the DNC’s impact on Philadelphia’s strip-club community.

With limited time – I mean, c’mon, covering a political convention is a time-consuming and (thanks to the heat) exhausting endeavor – I could only stop by one, so this is barely scientific research. And, to be quite honest, I hope to hear from those in the know that this does not reflect a local, industry-wide trendline.

The perfect spot – or so I thought – was located about four miles away on Columbus Boulevard. It was perfect because despite not being near conventioneer-filled Center City hotels, Club Risque had billboard and social-media ads, hyping its “Show your patriotism” DNC Deals. And, Uber makes such a trip eminently more convenient.

Those deals are as follows: No cover if you can produce a convention credential (or voter-registration card), kitchen’s open until 4 a.m. and couch dances cost $20.16. 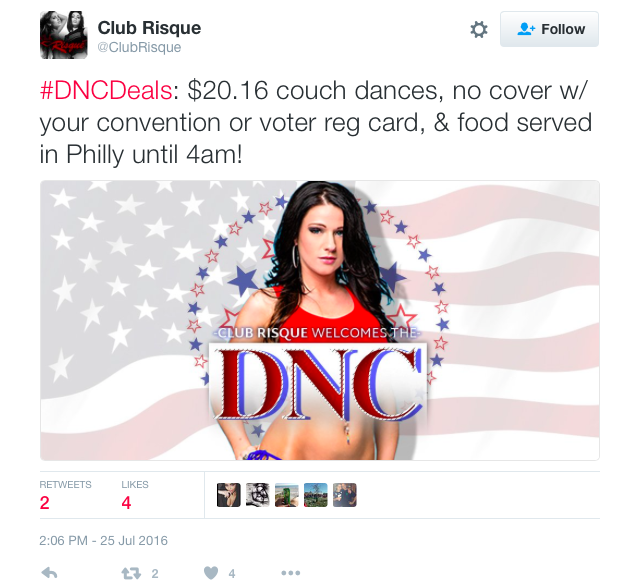 Upon arrival, my credential granted me free admission (thanks, Democratic National Convention media-credentialling team!). I asked security at the front door whether they’d seen an influx of democracy-hyped customers.

Alas, the answer was no.

“It's been dead in here around 1 a.m.,” came the response by way of explaining that plans to stay open until 4 a.m. were for naught.

A quick scan of the room revealed no DNC credentials or giggly delegates celebrating their time away from home. The roughly 10 customers – locals – were outnumbered by employees.

That disappointment was confirmed inside by an employee who probably wouldn’t want her name mentioned, even though she was alerted she was talking to a writer covering the convention. (Note to employee: If you happen to see this and want your name shared, by all means, drop a line and I'll update the story.)

Yeah, the kitchen was open late, but she and her co-workers didn’t even bother asking potential recipients to pony up the extra 16 cents for the DNC-special lap dance. That was more of a symbolic thing, it turned out.

“It’s been slower than we expected,” she said, shifting the conversation to the historical importance of the event, inquiring about what Bill Clinton was talking about at the Wells Fargo Center and correctly guessing the party affiliation on her conversational partner’s voter-registration card. “I really haven’t seen many people from the convention coming in.”

Then, she shared an important insight about how political discussions play in such an establishment.

“I never talk politics or Democrat versus Republican,” she said before heading back to work. “Nothing good ever comes of that.”

How right she was.

Results of the investigation? This isolated stop on the investigative trail seemed to indicate that Cleveland’s strip-club impact held true here, but do tell me if I'm wrong. On the bright side, there's still one more night to go, and some conventioneers might have a lot of money left to burn.