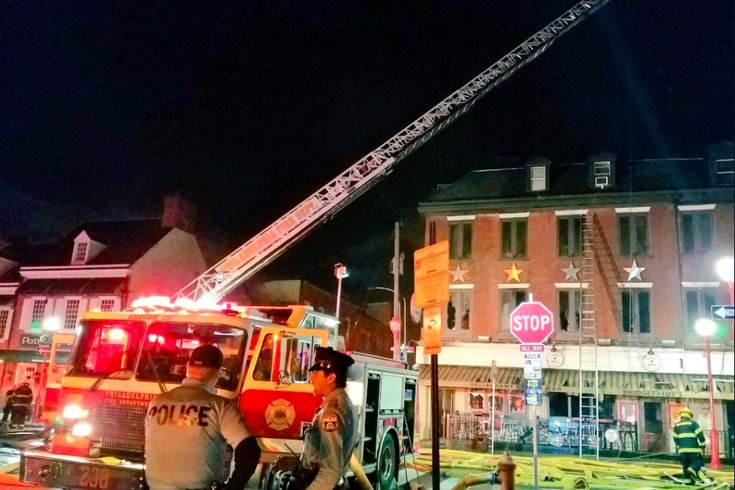 This image, tweeted by the Philadelphia Office of Emergency Management, shows Philadelphia firefighters responding to the blaze at Bridget Foy's restaurant on South Street.

According to NBC10, the fire started just after 1 a.m. in the basement of Bridget Foy’s, and more than 100 firefighters responded to the scene. By 3:50 a.m., the fire was considered under control, but firefighters remained, dousing the restaurant with water through 6:30 a.m.

Doggie Style, which is next door to Bridget Foy's, was also affected by the flames, and the shop’s surviving pets were taken to a veterinarian. Eleven people in nearby apartments have been displaced, 6ABC reported. There was reportedly no one inside the restaurant when the fire began.

Bridget Foy’s opened its doors nearly 40 years ago in 1978 in the midst of the Headhouse District restaurant boom. At the time, the neighborhood was one of the city's only real restaurant districts. Bridget Foy's was Philly’s first sidewalk cafe, first bar to serve Guinness on tap, and was known to host the Sixers, including Charles Barkley and Julius Erving, post-game in the 1980s.

When owner John Foy took over the space at the corner of South and Second streets, he first named the restaurant East Philly Café. Foy later met his wife, Bernadette, when she worked as a waitress there. Together, the couple ran the business, keeping it in the family with their daughter Bridget, who inspired a restaurant name change.

“Our hearts go out to John, Bernadette, Bridget, Paul and the entire Foy family. Bridget Foy's has been the cornerstone of South Street for 40 years and a vital part of our colorful and vibrant South Street story – and an important part of Philadelphia's history,” Michael Harris, executive director of the Headhouse District, said in a statement.

“Please keep the family and staff in your thoughts – as well as Howard Nelson and staff of Doggie Style, and those displaced in neighboring apartments. Our sincere thanks for all the first responders and the city's defenders for their efforts to contain the fire and keep our neighborhood safe. Please stay tuned for updates about how we can support the Foy's, Howard at the Pet Store, and anyone else affected.”