Spotted lanternfly could be on your Christmas tree this holiday season

One arborist says egg masses could be on trees, possibility for early hatching 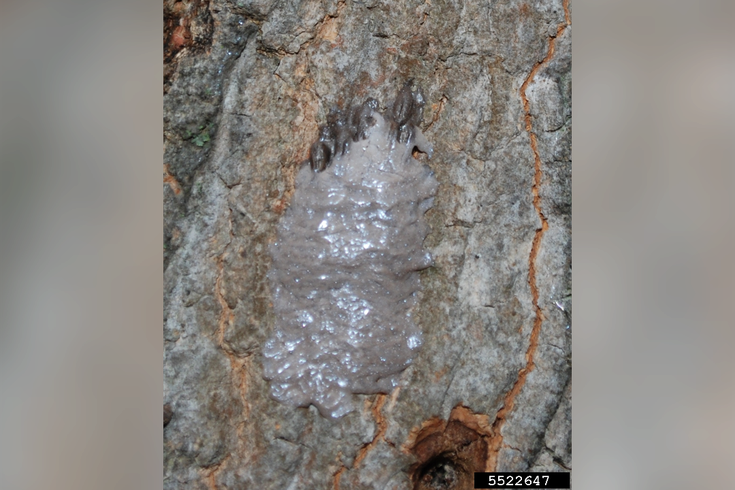 An egg mass from a spotted lanternfly, which could be left on Christmas trees this holiday season.

As the weather gets colder moving into the holiday season and conditions worsen for insects, environmentalists are hoping they'll be able to mitigate the spotted lanternfly problem.

But we've still got a couple of things to worry about. And one of them is our Christmas trees.

If you are like hundreds of Pennsylvanians this year, you'll pick out or cut down a live Christmas tree from a farm to get into the holiday spirit this December. But beware: Arborists are saying that tree thrown on top of your car might be infested with lanternfly eggs that could hatch in your heated home.

Arborist Gary Schermerhorn, of The Davey Tree Expert Company’s King of Prussia office, said while it's highly unlikely an adult lanternfly would survive through the winter, there's a possibility that an adult could lay eggs on a Christmas tree headed for your home.

Once the eggs are in a warm, heated environment, Schermerhorn said, they'll hatch. In nature, this happens in the spring months. But in our heated homes, it could take only a matter of weeks.

Schermerhorn said he's never personally seen it happen. But he's not ruling it out.

NJ.com reported a woman in Warren County saw two groups of egg masses — each containing 30 to 50 eggs — on her pre-cut Christmas tree last year that hatched inside her home in early January.

While they're not harmful to your or your home, Schermerhorn said, they're still just pests.

In an attempt to help customers check for egg masses and bugs, environmentalists have released guidelines warning tree growers and Christmas tree farm owners of the dangers of the egg masses and possibility for early hatching, Schermerhorn said. But after weeks with weather like this — with temperatures dropping into the mid- to low-50s — our trees could be in the clear sooner rather than later.

Schermerhorn said to always check your Christmas trees before putting them in your car or home, for any insects — not just spotted lanternflies. There could be a number of other insects that could hatch inside your home, he said.