Spring (training) is near: A look at Phillies' position player battles 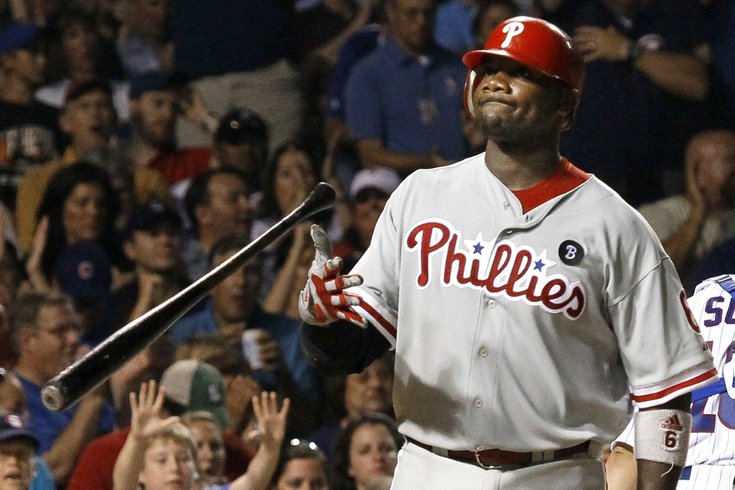 In case you don’t have a countdown clock on your computer’s desktop: pitchers and catchers report to Clearwater a week from tomorrow, on Feb. 17. And in just two weeks from today, on Feb. 23, the Phillies will hold their first full-squad workout of the 2016 season.

Now is as good of a time as any to take stock in what to expect in Camp Clearwater, where a new-look organization from top (of the president’s office at Bright House Field) to bottom (the dozens upon dozens of kids bunched in the crowded minor league locker room) will be in full bloom at the Carpenter Complex.

Since the forecast is calling for at least something close to what Charlie Manuel would call "hittin’ weather," we’ll begin our spring outlook by checking in on the position player battles on the horizon.

You could certainly make the argument that there’s been a vacancy sign up in the outfield ever since July 31, 2012, when former GM (and current Red Sox first base coach) Ruben Amaro Jr. traded two All-Stars on the same day, Shane Victorino to the Dodgers and Hunter Pence to the Giants. Here is just a small sampling of players who have logged time in the Phillies outfield since that date: Michael Martinez, Nate Schierholtz, Ty Wigginton, Hector Luna, Juan Pierre, Ezequiel Carrera, Delmon Young, Casper Wells, Roger Bernadina, Pete Orr, Tony Gwynn Jr., Grady Sizemore, Jeff Francoeur, and Brian Bogusevic.

The good news for the current roster: there aren’t many (any?) veteran retreads or fledgling former top prospects vying for real playing time. But there also isn’t any obvious, no-doubt-about-it starters, save Odubel Herrera --- and even Herrera could find himself in a new place in that outfield.

The best bet is that these are the five outfielders who make the Opening Day roster: Herrera, Aaron Altherr, Cody Asche, and newcomers Peter Bourjos and Tyler Goeddel. But which three will be in that Opening Day lineup, which will get the most regular playing time once the season begins, and where will they all play?

After listening to the decision makers this winter, it sure sounds like Altherr will be given every opportunity to win the right field job … and that management also puts a lot of value on the glove Bourjos provides, defense that’s strong enough to push Herrera to left field, possibly.

The Phillies didn’t do Asche any favors by introducing him to a new position in-season last year, but he also didn’t do himself much to have a leg up on a starting job heading into camp after slashing .245/.294/.395 in 129 games last year. A productive spring could help his case.

You have to believe the team will do everything in its power to keep Goeddel (a Rule 5 pick) around. He has to stay on the 25-man roster all season, but that shouldn’t be a challenge for a rebuilding team like the Phillies – they did it just a year ago with Herrera. If the toolsy Goeddel hits this spring, perhaps he plays himself into a more regular role like his Rule 5 predecessor.

It should be a fun camp no matter what happens. There’s a lot of youth and athleticism, two traits Amaro was in pursuit of for the majority of the last two years.

Speaking of youth and athleticism: 22-year-old prospects Nick Williams and Roman Quinn are both in big league camp, and although they won’t break camp with the team next month, both could surely find their way to Citizens Bank Park this summer. Williams, coming off a full season at Double-A, is closer to making that jump while the oft-injured Quinn probably needs to go somewhere and stay healthy for, say, at least three straight months, before he’s on the radar.

In case you missed it – which was easy to do since it came on the same day the Eagles unveiled their new coach across the street – manager Pete Mackanin said last month at Citizens Bank Park that former MVP Ryan Howard could be in the Phillies lineup less often in 2016.

The upcoming season is Howard’s last in a Phillies uniform; yes there’s a 2017 team option in his contract, but you’d have as good of a chance at getting the Los Angeles Angels to agree to swap Mike Trout for Howard as you would in getting the Phillies to pick up that $23 million team option. Translation: the Howard Era (along with the Utley Era, and the Rollins Era, and the Hamels Era) is over in Philadelphia, or at least close enough to the finish line that there isn’t any real reason to let respect or history factor into the decision-making of a rebuilding team that finally appears to be headed in a healthy direction.

Is Darin Ruf the long-term answer at first base? Probably not, but he’s still just 29 and he did produce the only time he was given an everyday shot as a first baseman. The Phils' front office owes it to themselves to see if there’s something there: If Ruf plays and produces as he did in the second half of 2013, he could be an interesting trade chip if nothing else.

When the Grapefruit League schedule begins on March 1, expect Mackanin to give Howard a chance to prove himself against lefthanders. But, given that Howard has hit .184 against lefties with 22 home runs and 194 strikeouts since the beginning of the 2012 season, don’t expect him to succeed or show enough to prevent Mackanin from running a full-time platoon at first base once the regular season begins.

And also don't be surprised if Ruf plays more, period, if he produces early on and shows there is still promise in his powerful bat.

And Keep An Eye On…

Both Williams and Quinn, rising outfielders in the Phillies system, have already been mentioned above. It’s not out of the question that both are in the 2017 Opening Day lineup.

The main attraction among the prospects this spring, however, will be J.P. Crawford, recently rated the fifth best prospect in baseball by MLBPipeline.com.

Crawford, the team’s top pick in 2013 and in his first big league camp this year, has all of the tools to be the player the Phillies build around in the next half decade and beyond. Crawford’s big league arrival likely won’t come until late in the summer, but he’ll have a chance to at least alter the front office’s thinking when he takes the field with the rest of the major league team in two weeks.

Jorge Alfaro (Hamels’ trade) and Andrew Knapp (Paul Owens Award winner) will also be fun to watch in Clearwater this spring. Will one of them play somewhere other than catcher at the Carpenter Complex at some point? I'd be surprised if they didn't, even if it's an inning at first base (for Knapp) or the outfield (for Alfaro) here or there.

Down in minor league camp, Cornelius Randolph will take part in his first professional spring training. Randolph, 18, is a long away from the big leagues, but if you make the trip down to Clearwater this month, you can see him work out and play in minor league games at the Carpenter Complex in March.