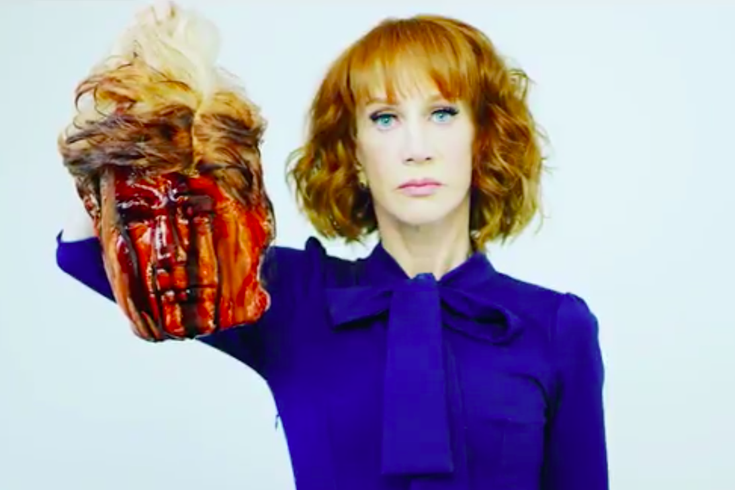 Squatty Potty is a “small, family business based in Saint George, Utah that has become a national sensation.”

This is in part due to its appearance on "Shark Tank" and self-described “hilarious, viral socal media-driven ad campaigns.”

Kathy Griffin is an “American writer, producer, actress and television host" who has become a national sensation.

This is in part due to her decision to participate in a photo shoot that “featured her holding up a bloody head resembling President Trump.”

For this, amid heated backlash, she has apologized, and rightfully so.

Squatty Potty and Kathy Griffin were tied together because of the latter’s participation in an ad campaign for the former. You can view one of those spots via this link, until it's inevitably scrubbed.

That relationship is no longer solvent.

Per a 12:20 a.m. press release from Squatty Potty CEO Bobby Edwards, the business relationship was severed because of the severed-head image.

“We were shocked and disappointed to learn about the image Ms. Griffin shared today, it was deeply inappropriate and runs contrary to the core values our company stands for,” he wrote. “In response, Squatty Potty has suspended its ad campaign featuring Ms. Griffin. We have acted swiftly and decisively to demonstrate our commitment to a culture of decency, civility, and tolerance.”

The release then goes on to invite readers to “learn more about Squatty Potty by visiting squattypotty.com.”

This is a shining example, a case study if you will, of that very dynamic unfolding in real time.

In any event, it’s time for some full disclosure:

The only reason I wrote this story was so I could take advantage of the rarer-than-a-unicorn chance to write a headline that reads “Squatty Potty dumps Kathy Griffin.”

Even though I’m about to turn 44, potty humor still gets me each and every time.