The Boba Fett action figure, with a rocket that really fires, is expected to fetch at least $200,000 – maybe twice that much 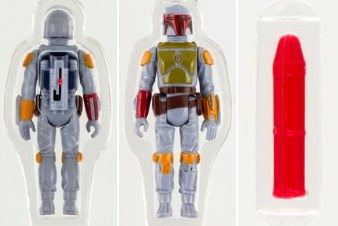 This Boba Fett action figure, based on the character in the 'Star Wars' movies, is expected to be auctioned for more than $200,000 at Hake's in York, Pennsylvania. The 1979 toy is a rare prototype with a rocket that actually fires.

A rare prototype of a "Star Wars" action figure could set a world record in that category when it's auctioned next month in Pennsylvania.

Originally 80-100 examples of this prototype were shipped to Kenner from the Hong Kong manufacturer for safety testing purposes, which resulted in only "non-firing" action figures, with sonically welded missiles, being released to the public, Hake's said at the page for the auction.

Only about 25 of these Boba Fett prototypes have survived, and most of them didn't retain their value because they were put through rigorous testing procedures when they were manufactured. The one in the auction can fire its rocket, although for the price it's going to take to acquire, leaving it be might be the best course of action.

The toy measures 3.75 inches tall and is fully painted. It is described as a J-slot variant due to the shape of the firing mechanism that secures the rocket. Other prototypes, called L-slots, presented problems because they lacked a tab to keep Boba Fett's rocket in place, according to PennLive.

Boba Fett, a bounty hunter, first appeared as an animated character on television in 1978 as the "Star Wars" franchise's next major villain alongside Darth Vader. He made his theatrical debut in "The Empire Strikes Back," but was retroactively inserted into a scene in a special edition of "A New Hope" in 1997.

Ten bids have placed on the action figure as of Nov. 9.