Brock Stassi's wife, Jana, watched the Phillies game on Opening Day in Cincinnati with his parents, Jim and Racquelle, and nearly two-dozen other friends and family that flew in from Northern California.

CINCINNATI – Before being bombarded by his teammates, Brock Stassi placed a pair of phone calls that went unanswered late Thursday afternoon.

Jim Stassi was out with his fifth-period physical education class. Racquelle Stassi, a radiation therapist, was with a client.

It was the middle of their work days back in Northern California.

“Somebody’s got to work for a living,” Jim Stassi said with a laugh about 20 rows from the visiting dugout at Great American Ball Park on Monday afternoon.

But then the golf cart came barreling through the campus at Yuba City High School and toward Jim Stassi. On it were Joe Seaman, the school’s athletic director, and Chuck Robinson, who works in security.

The golf cart was headed his way and his friends were pumping their fists in the air.

“I figured it must be some good news,” Stassi said.

The news was this: Jim Stassi, a former minor leaguer whose own baseball career topped out 34 years earlier at Triple-A Phoenix, got word that his oldest son, Brock was officially a major leaguer. Phillies management brought Stassi into manager Pete Mackanin’s office late Thursday to tell the 27-year-old, former 33rd-round pick that he had made the team’s 25-man Opening Day roster.

“When I went back to my office after teaching my last class of the day,” Jim Stassi said, “I started reading some of the texts that I got, which were many, and the videos and all of that. I mean, I lost it in my office at school. But I was by myself.”

According to the eldest Stassi, Brock is the least emotional of his three sons. His middle son, Max, is a catcher who has played in 30 games in the last four years with the Houston Astros. His youngest, Jake, pitched at Long Beach State but never fully recovered from Tommy John surgery. He works in real estate. 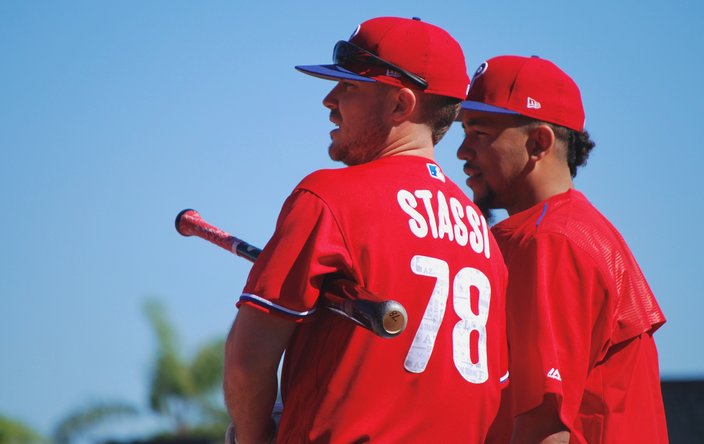 Brock Stassi, who turns 28 this summer, hit .200 with one home run and a .291 OBP in 50 games at short-season Williamsport six years ago, the summer after the Phillies took a flyer and drafted him on the third and final day of the MLB Draft. He wasn’t sure what would happen as senior-sign (draftspeak for a drafted collegiate player without any eligibility remaining), whether the Phillies would continue to give him a job.

It’s something I never dreamed of, but they dreamed it every night. They’ve been focused on one thing ever since they were little, this is what they wanted to do.

But he kept plowing ahead, even if it meant working as a hitting instructor or substitute teacher in the offseason, and eventually graduated to A-ball and enjoyed a breakout season at Class A Clearwater in 2013.

Jim Stassi, who is perfectly content with his own playing career that never reached a big league field and ended in Italy in the mid-80s, knew his sons were built a little differently.

“He just loves to play,” Stassi said before the Phillies 4-3 win over the Cincinnati Reds on Opening Day. “It doesn’t matter if it’s out here or in the street over Christmas break or whatever. He just loves to play the game. And for him to be able to realize this, it’s been fun for my wife and I to follow our kids around for so many years.

“It’s something I never dreamed of, but they dreamed it every night. They’ve been focused on one thing ever since they were little, this is what they wanted to do. It’s just fun being able to live it with them and see their dreams come true.”

The whole world basically got to see Brock Stassi’s dream come true in the last five days. Or at least everyone connected to digital media. So, again, the whole world.

Shortly after receiving the news he’d waited his whole baseball-playing life to hear, Stassi was met by Tommy Joseph and Andrew Knapp for hearty hugs and slaps on the back. Both Joseph and Knapp celebrated their own first big league Opening Days on Monday, but neither one of them had their first big league moment go viral.

“That’s cool,” said Joseph, who enjoyed his own improbable path to the big leagues in 2016. “I’m just trying to hide.”

Stassi wasn’t afforded that luxury as he was met by a half-dozen or so members of the Phillies traveling media on Thursday, following the team’s penultimate game of the spring. He struggled for words, calling it “a dream come true.”

And then the tears came. And the iPhone cameras captured them.

“Oh god, I just broke down,” Racquelle Stassi said of watching her son’s raw emotions through her phone. “I’m just so proud. Words obviously can’t describe that feeling, of how hard he worked.”

“Oh, gosh – I wasn't surprised at all by his reaction,” said Stassi’s wife, Jana. “I had a feeling he would be pretty emotional about it, knowing how hard he’s worked. He’s a pretty even-keel guy, he doesn’t show a ton of emotion. But when we got engaged, when we got married and now this, seeing that joy in him is so special.”

Unlike her in-laws, Jana Stassi got to see that joy immediately. She had planned a trip to Clearwater, Fla., for the final week of camp knowing things “could go one way or the other.” They went the way both had hoped although she didn’t hear it the way both planned – in person – but instead while anxiously awaiting word outside of Spectrum Field while on the phone with Max Stassi.

I think the fact that it’s so raw and sincere, that’s what people want to see... The fact that it touched that many people, it’s just so cool. It’s unbelievable.

“I wasn’t working last week and I was going crazy, to be honest,” she said. “I had nothing to do, so all I was doing was thinking (about it) or reading the articles. But Brock was so calm. He should have been the one freaking out. He’s so calm. So last week was so nerve-racking. … We’re talking for like 20 minutes (Thursday) and then Max goes, ‘Oh my god, Oh my god.’ And then my brother is calling me on the other line and I knew at that point.”

“And then Brock came out a couple minutes later and he was with some of his buddies and so I was trying to play it cool. But then I burst into tears and ran over to him. We both started crying.”

During the Phillies' pit stop in Philadelphia on Friday, in between Clearwater and Cincinnati, Brock and Jana Stassi went out to dinner with Knapp, Joseph, and their significant others. Joseph purposely made the reservation for “Stassi,” and, sure enough, every waiter in the restaurant shook his hand and his dessert was delivered with a personal congratulatory message.

Jana Stassi was met by her parents, her in-laws, and her youngest brother-in-law in Cincinnati this weekend, a group of nearly two dozen that made a point to get to Great American Ball Park for Opening Day. Some of them will continue on to Philadelphia, where the Phillies play their first home game of the season on Friday. Others will fly back home to California.

“I just want to see him out there,” Jana Stassi said.

Brock Stassi draws a walk in his first MLB at bat while his fam watches pic.twitter.com/IGI4mdtcB1

Nearly three hours later, Jana Stassi, who met Brock in eighth grade and married him exactly four months before Opening Day, got her wish. Brock Stassi pinch hit for Edubray Ramos with two outs in the eighth inning and walked on five pitches.

But Stassi’s first major league moment occurred four days earlier in a viral video that was shared over a thousand times on social media, by former teammates, fellow pro athletes, national broadcasters, and also by people who just appreciated a story of someone who worked hard to reach their life’s dream.

“I think the fact that it’s so raw and sincere, that’s what people want to see,” Jana Stassi said. “Also I think sometimes there’s a misconception or stereotype about professional athletes and the personalities that they may have. But this is such a humbling experience for these guys who have made it through the minor leagues. So I think Brock is a good example of the way all of these guys feel when they make it. The fact that it touched that many people, it’s just so cool. It’s unbelievable.”

You're going to want to watch this.