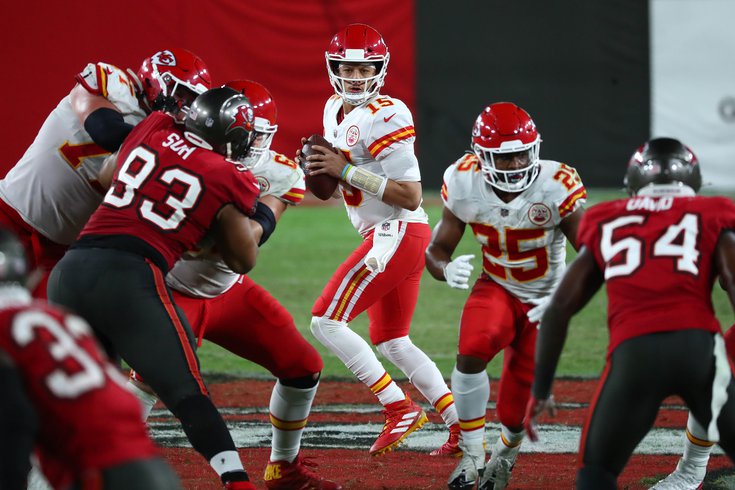 Two hundred and sixty eight games down, one to go. That's right, after a full season in which the NFL was actually able to play every one of its 256 regular season games — plus another 12 so far in their expanded postseason format — it all comes down to one game. And, for the first time ever, one of the two teams playing in the Super Bowl will be doing so at their home stadium ... and will still be an underdog.

With the AFC and NFC winners now decided, all that remains is one final matchup featuring Patrick Mahomes and the defending champion Kansas City Chiefs against Tom Brady and the Tampa Bay Buccaneers in Super Bowl LV at Raymond James Stadium.

And there will be no shortage of storylines to follow in this one — from a potential changing of the guards at the top of the NFL's QB ladder to Andy Reid looking to win his second straight title after failing to win a Super Bowl throughout the first two decades of his career to former Temple head coach Bruce Arians looking for his first title. And that's without even looking up and down the rosters for both these teams.

But before we get into any of those angles to the game, there's one that some fans probably care about even more: the odds. And since this is the Super Bowl, there's going to be no shortage of ways to wager on the action, from the opening coin flip all the way down to the final play of the game.

We'll have you covered with some of the more fun (and often insane) prop bets as more sports books release them in the days leading up to the big game, but in the meantime, let's take a look at the two big bets for this one — the point spread and the final score — courtesy of TheLines.com.

The odds opened with the Chiefs as 3.5-point favorites, but by the end of Monday they had already dropped by a half point at all four sports books listed on TheLines.com, with the underdog Buccaneers getting a boost perhaps in part due to the fact that Kansas City left tackle Eric Fisher tore his Achilles' tendon in Sunday's win over Buffalo, leaving them several moving parts in front of Patrick Mahomes.

Still, this Chiefs offense is scary, and the added addition of a solid running game to compliment their explosive passing attack makes them all the more dangerous. Sure, they finished in the middle of the league in rushing yards, but they average a respectable 4.5 yards per carry (which was certainly wasn't hurt by occasional big rushes from Tyreek Hill and and even Mahomes himself) and, if you take out their Week 17 game without their starters, the Chiefs finished with over 100 rushing yards in six of eight games since the bye, including each of their two postseason wins.

But, as you likely already know, it's the passing game where Kansas City will really hurt you. Their 40 passing touchdowns were good for third while they led the league in passing yards this year, and their ability to take the top off a defense and stretch the field causes defenses to over-compensate and often leaves Travis Kelce in single coverage over the middle, a matchup he'll win pretty every week, regardless of the opponent. They're a walking mismatch, and Mahomes' ability to improvise coupled with Andy Reid's willingness to not only let him but to make it easier to do so is a match made in heaven — and a nightmare for opposing defenses.

Then there's the other sideline, which will feature the winningest quarterback in NFL history going for what could very well be his last Super Bowl. There's nothing to suggest Tom Brady will retire after this season, but Father Time remains undefeated. And even if Brady has been one of his greatest adversaries to date, he eventually comes for us all. And winning is going to become more difficult with each passing year.

That being said, the former Patriots quarterback is playing some top-shelf football in his first season in Tampa at age 43. Just take a look at how his 2020 numbers compare to Mahomes...

That's not too shabby for the old man, especially considering many thought he was washed up before this season even started.

While Brady and his receivers, like Mike Evans and Chris Godwin, get the majority of the headlines, the real story in Tampa this season (and arguably the key in Super Bowl LV) has been their balance. For as good as Brady and the offense has been, their defense has been just as good. A perennial power house in the run game, Todd Bowles' defensive finished No. 1 across the board against the run and were Top 10 in both yards and points allowed. They also finished the regular season fifth in the NFL with 25 takeaways and tied for fourth with 48 sacks.

So, how will this all play out on football's biggest stage? Well, if their Week 12 matchup in Tampa is any indication, it should be a good one. The Chiefs barely escaped with a 27-24 win in a game that featured 960 total yards of offense. Somehow, the total was just 51 points, but if both offenses can keep up that kind of volume, it's safe to assume there will be more points scored in this one.

Either way, Brady vs. Mahomes should be fun to watch.