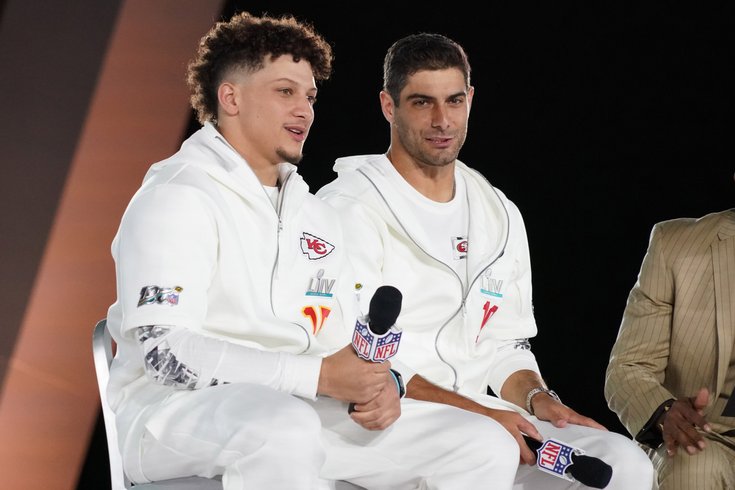 What in the hell are these outfits? Are they going to the moon?

A year ago, the Super Bowl was difficult to get excited about, as the scumbag cheating New England Patri*ts took on the Sean McVay hype machine Los Angeles Rams, who, if we're being honest, were beneficiaries of an atrocious no-call in the NFC Championship Game, and would very likely not have advanced, absent that luck.

As it turned out, the Patri*ts and Rams played an incredibly boring, sloppy game, in what was one of the worst Super Bowls ever.

This year, we have a much more aesthetically pleasing matchup between Andy Reid's track team in the Kansas City Chiefs, and a San Francisco 49ers team that was so bad for so long that they were able to build the best defensive line in the sport via very high draft picks.

Both teams had easy roads to Miami through the playoffs.

• The Chiefs got to play an average Texans team with a negative regular season point differential, followed by the 6-seed Titans, who were frisky, but ultimately undermanned and playing their fourth road game in 22 days.

• The Niners got a Vikings team on a bad day, followed by a Packers team that they matched up very well against, when teams like the Saints or Seahawks almost certainly would have presented stiffer challenges.

The Chiefs opened as 1-point favorites, but that line has since moved to 1.5 points. I believe they are the more battle-tested team, as they fell behind big in both of their playoff matchups this year, but didn't panic, and their offense simply exploded for comfortable wins.

In my view, the Chiefs can (and will) score on anyone, including the Niners, who have a good-but-not-exceptional defense. While the Niners do indeed have a ferocious pass rush, they allowed 31.8 (!) points per game in their final four regular season matchups. They are not the 1985 Bears, or anything close to it.

Meanwhile, because the Niners faced favorable matchups in their first two playoff games, they were able to get their rushing attack going, and Jimmy Garappolo only had to attempt 27 passes in those two games, combined. They are not going to be able to control the game in that way against the Chiefs, who, as noted above, and can't be stressed enough, are going to put points on the board.

Ball control and punts won't win this game. Kyle Shanahan is going to be forced to put the ball in the air with Garoppolo, and obviously, he is not on the same level as Patrick Mahomes, who is arguably the best football player on the planet right now.

I like old Andy's chances of finally getting it done. It should be a fun game, and I see the Chiefs pulling away sometime around the middle of the fourth quarter. Give me KC, -1.5. It's time.

Feel free to discuss the game below.