Philly residents don't like the Streets Department, but are good with city trash collection 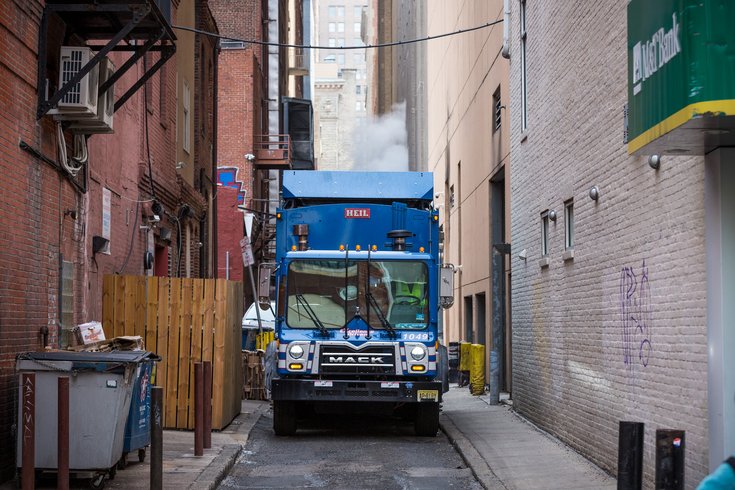 Most Philadelphia residents are satisfied with the city's fire department, drinking water and garbage and recycling collections. But they aren't nearly as pleased with the police department or the streets department.

Those are the broad takeaways from the first comprehensive survey since 2007, gauging Philadelphian's attitudes toward their city government.

The Office of Performance Management asked Philadelphians to measure their attitudes toward a wide range of city services. The survey asked residents to rate the city's varied services as "excellent," "good," "fair," "poor" or "don't know."

The city released those results Thursday afternoon. The next step is implementing strategies to improve the areas where the residents are dissatisfied.

"Philadelphians are never shy about voicing their opinions, whether it's about sports or government or politics," Mayor Jim Kenney said. "The problem is, the city has never studied those opinions in a systemic way to make improvements neighborhood by neighborhood. ... One full decade between surveys – that's far too long."

CLEANING UP THE STREETS

Those markings were among worst that any city department or service received.

"Although the department endeavors to provide clean and safe streets in the most efficient and effective manner possible," Streets Commissioner Carlton Williams said, "We recognize there's a critical need to improve services that affect our citizens."

The Streets Department aims to repave 131 miles of streets each year, Williams said. City officials have committed to allocating an additional $5 million in operating funds for street repairs in each of the next five years.

By fiscal year 2023, the city anticipates spending $174 million on reconstruction and resurfacing projects.

To combat litter and illegal dumping, the Streets Department intends to implement the various recommendations included in the city's Zero Waste and Litter Action plan, a strategy that aims to eliminate the city's use of landfills and conventional incinerators by 2035.

Two brine trucks are expected to be added to city's fleet to aid snow removal services.

About 78 percent of respondents rated the level of police presence in their respective neighborhoods as either excellent, good or fair. Police responsiveness, approachability and officer conduct received similar responses.

Police Commissioner Richard Ross said he was not surprised by any of the results, particularly divides that appeared among racial demographics.

"We have to work on this, not only as Philly PD, but in this profession," Ross said. "The overall numbers somewhat mirror what we see nationally with regard to overall satisfaction of police. The trend certainly has changed demographically over the last few years. These are things that are not lost on us, and we'll take a look."

Of the respondents who rated overall police services as poor, 50 percent were black, 29 percent were white and 20 percent identified as "other." A similar racial demographic breakdown appeared in the area of police presence, too.

To increase their presence, Philly police have hired 100 new officers within the last year, Ross said. Another 360 potential officers are currently in the police academy. And police have placed a higher emphasis on foot and bike patrols.

"We will continue to work very hard on the various aspects of the survey," Ross said.

Some of the highest satisfaction rates came in the areas of trash and recycling collection.

The city's drinking water gained mostly positive responses, with 49 percent rating it as excellent or good, 27 percent considering it fair and 13 percent ranking it as poor.

Code violations related to vacant lots, abandoned buildings and graffiti are considered a problem by many residents, as 29 percent of respondents rated the city's handling of such problems as poor. Only 13 percent considered it excellent or poor, with the majority – 56 percent – rating it as fair.

Black people were more likely to rate the city poorly in the areas of code violations and drinking water, said Angelina Ruffin, the city's director of performance management.

In the area of health and human services, many residents were unsure how to rate behavioral health services, child welfare services and youth programs. At least 46 percent of respondents in each of those areas said they didn't know how to rate them.

Similarly, at least 27 percent of respondents were unsure how to rank the city's recreational facilities and programs.

Kenney said city officials will continue surveying city residents as a way to gauge improvement in these areas. The next resident survey will begin next year.

"We will do a better job and we will keep listening," Kenney said.

In completing its initial survey, the Office of Performance Management partnered with Temple University's Institute for Survey Research. A total of 8,683 residents completed the survey, but only 7,232 respondents included the demographic information needed for weighting and analysis.

In that phase, in which any resident could opt into the survey, another 1,636 surveys were received, including 63 percent from people of color. In the combined samples, 39 percent of respondents identified as people of color.

The complete results of the survey can be found here.