Another nor'easter. Another snow day. Here's what you need to know 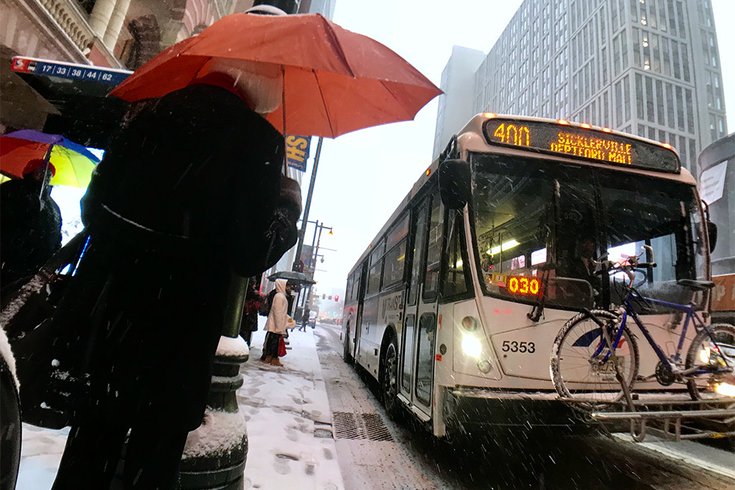 Commuters wait in the snow at a bus stop near 12th and Market streets in Center City Philadelphia on Dec. 15, 2017.

With yet another nor'easter hitting the Philadelphia region, here's what you need to know to survive Winter Storm Quinn:

The City of Philadelphia has declared a snow emergency to take effect at 8 a.m. Wednesday, which requires all parked cars to be moved off snow emergency routes so that plows can clear the city's major thoroughfares.

The Philadelphia Parking Authority is discounted, $5 parking at Center City garages through the end of the snow emergency. Those entering the garage after that time will pay normal rates. Beginning at 8 a.m. Wednesday, the PPA will halt enforcement of meters, kiosks and time limit violations. But it will enforce all snow emergency and safety violations.

THE LATEST: Forecasters declare winter storm warning ahead of nor'easter

In anticipation of the storm, all Philadelphia public and archdiocesan schools are closed Wednesday.

The archdiocese noted that its high schools and parochial elementary schools in the suburban counties typically follow the decision of their local public school district and submit an independent closure status.

Hundreds of schools are closed Wednesday in the four suburban counties and South Jersey. School closings and delays can be found at Fox29.com.

All courts and government offices are closed Wednesday in Bucks, Chester, Delaware and Montgomery counties.

In South Jersey, all Camden County offices are closed for non-essential employees. The Camden County Prosecutor's Office will be closed.

SEPTA, which is urging customers to avoid unnecessary travel, has released a list of detours, suspensions and delays already set for Wednesday. SEPTA's weather-related updates will be posted online.

Several city bus routes will be delayed, detoured or suspended starting at 9 a.m. Wednesday. Additional routes may be affected depending on how much snowfalls and other effects of the storm.

Amtrak has canceled some Acela Express, Northeast Regional, Keystone Service and Empire Service trains on Wednesday. Details, along with re-accommodation information, can be found here.

Philadelphia International Airport advises passengers to check flight status with their airline before coming to the airport wherever you’re flying. Some airlines are offering fee waivers to change itineraries for booked travel to/from certain cities on certain dates in anticipation of the storm. If you're planning to fly over the next couple of days, check with your airline for details. To get flight status, call your airline, get updates at 1-800-PHL-GATE or check the airport website, www.phl.org.

The Philadelphia Parking Authority will not enforce meter and time limit violations after 8 a.m. Wednesday due to the snow emergency. The PPA will enforce all snow emergency and safety violations. Vehicles illegally parked on snow emergency routes will be subject to ticketing and towing.

PPA will offer discounted parking in Center City garages during the snow emergency to help lessen the amount of cars parked on the street. Beginning at 8 a.m. Wednesday and running through the end of the snow emergency period, a special 24-hour flat rate of $5 is available for the following parking facilities below.

The 2018 Philadelphia Flower Show has weathered the storm before. So the show will go on. The Flower Show will be open Wednesday from 10 a.m. to 9 p.m. at the Pennsylvania Convention Center in Center City. This year's theme is "Wonders of Water."

Here's the short-term forecast for Philadelphia from the National Weather Service:

Wednesday: Snow before 8 a.m., then rain and snow, possibly mixed with sleet between 8 a.m. and 1 p.m., then snow after 1 p.m. High near 37. East wind 15 to 17 mph becoming northwest in the afternoon. Chance of precipitation is 100 percent. New snow and sleet accumulation of 3 to 5 inches possible.

Wednesday night: Snow likely before 9 p.m., then a chance of snow showers till 3 a.m. Cloudy, then gradually becoming partly cloudy, with a low around 32. West wind around 15 mph. Chance of precipitation is 60 percent. New snow accumulation of less than one inch possible.