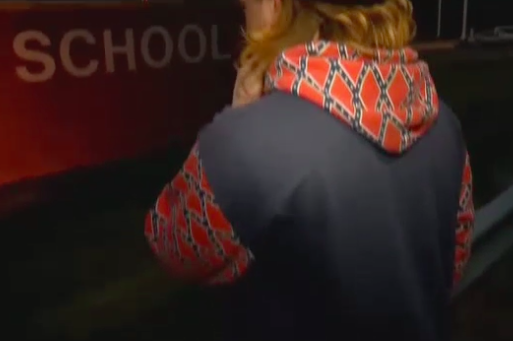 A Pennsylvania teenager suspended from high school for wearing a hoodie depicting the Confederate flag could be expelled, he said, for defying the school's shifting policy on wearing the controversial symbol.

Noah Leech, a student at Plum High School in Allegheny County, created a rift in the student body after he wore the hoodie with a Confederate flag pattern on the sleeves and hood. Leech insisted the sweatshirt was an homage to his family's roots in West Virginia, according to WTAE. While many associate the symbol with slavery and racism, Leech said he believes it's more about showing support for independence.

Leech even suggested his ancestors near the Mason-Dixon line were often instrumental in freeing slaves in the border state of West Virginia.

"Our bloodline comes from West Virginia," Leech told the news station. "They were helping move slaves from the South into the North under the Confederate flag, so that's what I stand for."

Historically speaking, the Ceredo colony in far west West Virginia stands out as an example of a community with a successful economy not built on slavery. It was founded by Eli Thayer, a transplanted New England abolitionist whose mission was to counteract Southern slavery in the years running up to the Civil War.

Towns like Ceredo and Parkersburg became Underground Railroad sites — to what extent, and with whose help, is not well documented — but both eventually came under military pressure from the Confederacy.

At Plum High School, disagreement over Leech's suspension prompted some of his supporters to display Confederate symbols on their cars, escalating tensions among the student body.

Further complicating matters is the Plum Borough School District's equivocation on the matter. After first banning the Confederate insignia, the district determined Leech had a First Amendment right to wear the hoodie. Then late last week, in light of more than 50 complaints lodged about the sweatshirt and related student behavior, the district reversed course once again and prohibited Leech from wearing the hoodie

Public school districts cannot restrict students’ speech, except when actual, material and substantial interference with school operation occurs, or the likelihood that the speech would cause such disruption. We have investigated, and will continue to investigate whether the wearing of a specific symbol constitutes harassment directed against one or more individual students because of a student’s race, religion, ethnicity, or gender. In this context, harassment is considered unlawful if it is sufficiently severe, persistent or pervasive that it affects a student’s ability to participate in our educational program or creates an intimidating, threatening or abusive educational environment.

The district's letter did not comment specifically on whether Leech's clothing could be construed as harassment. There was no immediate indication Leech faced expulsion beyond the issue of whether he decides to continue to violate the school's policy, which he has said he intends to do.

"I'm sorry that I've ever offended anyone about it," Leech told WTAE, "but I'm going to continue to wear my hoodie and support what I support."