Meet the woman with 'a new car’s worth' of tattoos 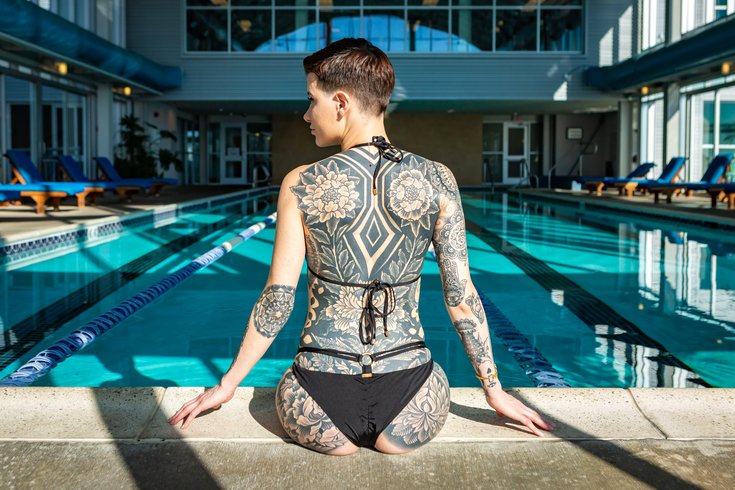 Octavia Plach during a recent photoshoot with PhillyVoice. The large tattoo on her back was done by the artist Hoode from the Black Vulture Gallery in Fishtown.

Octavia Plach is used to the looks.

While some glances are filled with admiration others "look at me with disgust on their face, like, ‘How do you live with yourself looking like that.’"

Turns out Plach, whose goal is to make her entire body a work of tattoo art, is living with herself just fine.

As Philadelphia welcomes the 21st annual Tattoo Convention this week, Plach, who has recently appeared on The Daily Show, Law & Order: Special Victims Unit and on Paramount Network's Ink Master, sat with PhillyVoice to talk about her career and her journey toward becoming a heavily-tattooed woman. 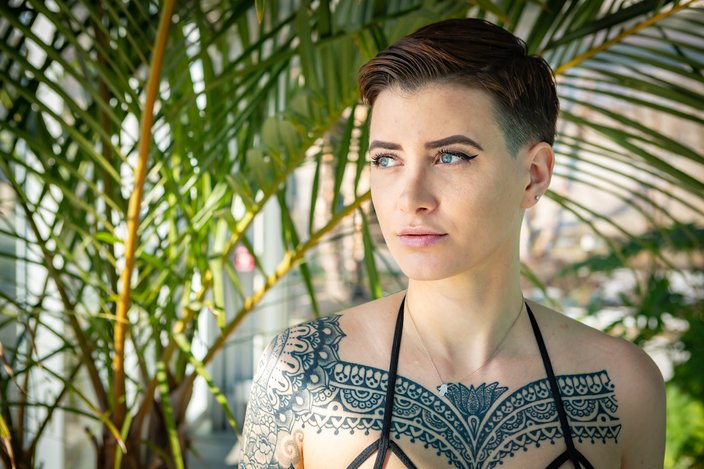 Philadelphia-native Octavia Plach poses for a photo during a recent photoshoot with PhillyVoice.

As a model and actor, are you booking more work now than before you began getting tattooed?

"It’s hard to say. I’ve been doing this for a long time and hard to know exactly why I’m being chosen. A lot has changed since I started this 10 years ago. There is so much I’ve gone through since then, including cultivating my own personality, it’s hard to know if it’s my tattoos that are booking me work, or if it's my personality. Everybody knows me as the girl with short hair, tattoos and a kick-ass personality."

It's our understanding that tattoo artists actually have to give you permission to show your tattoos on television productions or model shoots. Is that a difficult process?

"So, the artists need to state it’s ok for their work to appear in the productions I’m working on. Most productions have their own legal teams with release forms. I have an app that makes this a little easier, but it still gets complicated. It’s a difficult process because for every tattoo I have, I need to add an image of the tattoo onto a rider of a specific waiver and have the artists sign off on it.

"Recently one of my artists was giving me a hard time signing the release forms, so I’m blacking out those tattoos because I need to work. I’ve had seven artists to date, and I'm not interested in having any new artists work on me since it’s such a nuisance. If I don’t get the release, I can’t work." (After blacking out several tattoos, Plach posted the video below on Instagram.)

Tell me about your main artist. How did that relationship come about?

"His name is Hoode, he is part of the Black Vulture Gallery in Fishtown. He was a referral from one of my luxury real estate clients, who was getting a neck tattoo, ironically, and I asked him about it. The clarity and line work were excellent and the way the color was packed stood out to me. I could see it was good quality work, so he referred me. He’s done all of my back, my butt, my elbow, the tops of my forearms, left thigh, left knee and left shin. All of the work on my left leg was done by him except my foot, which was done by Kyle Fitzpatrick at Philadelphia Eddies. I went to Hoode pretty much every-other week last year. It was a great referral!" (All tattoos visible in above video were done by Hoode.) 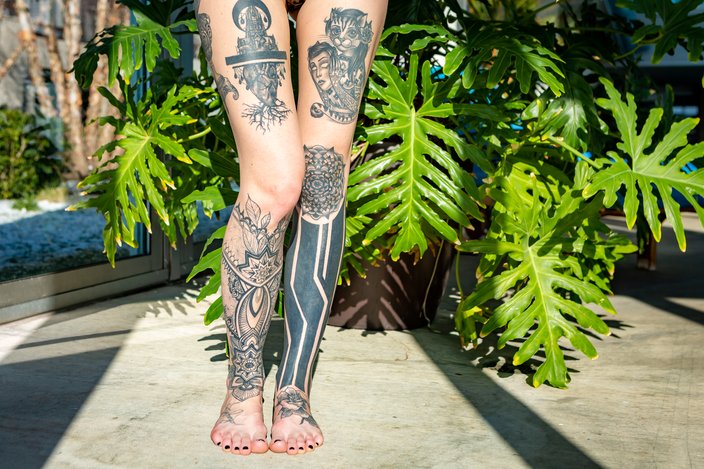 Some of Plach's most-recent tattoos include the black work on her left shin, and large, black work pieces on her sides, which occurred after being photographed.

How did you go from getting a few single tattoos, to wanting to fill everything in?

“I got my first tattoo on my 18th birthday, in a spot that I could keep covered from my family, from a dirty hole-in-the-wall place in Philly. It was a disaster. Long story short, it was a figure of a woman, but when the artist tattooed it on me, the bottom of her leg was on backwards… So then I tried laser removal but that didn’t work well because I’m fair skinned, it was leaving scars and was excruciatingly-painful - like pouring deep fryer oil on my skin. Then I got a shitty cover up in LA. That’s like the worst thing you can do in the tattoo world- get shitty tattoo to cover up a shitty tattoo.

"Fast-forward to fall of 2015 when I started my right sleeve. I was hoping to get a 3/4-sleeve but still be able to cover it up and hide from parents. But in reality, there comes a time when you want to wear something besides a 3/4 sleeve t-shirt.. So that's where it began, from there the rest was history." 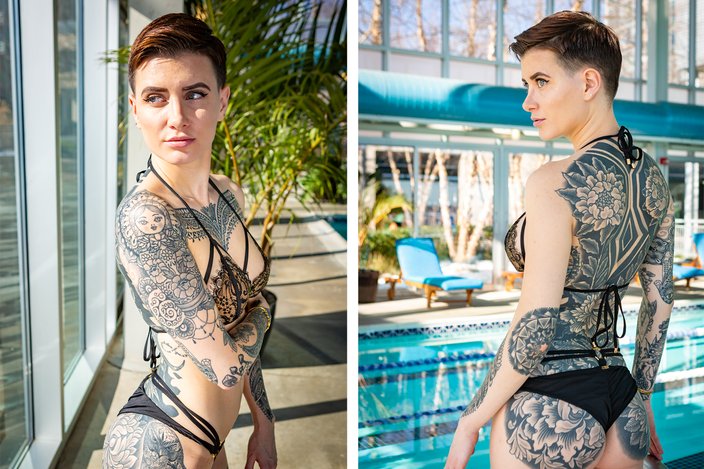 “My right sleeve is my whimsical sleeve with Russian nesting dolls and a hamsa to reflect my Ukrainian and Jewish background,” Plach said.

Is there a particular theme, how did you decide on these designs?

“I love blackwork and patterns. While some of my tattoos have meaning, some don’t. I don’t think tattoos need to have meanings. But my right sleeve is my whimsical sleeve with Russian nesting dolls and a hamsa to reflect my Ukranian and Jewish background. There is a theme of folklore with dolls, mushrooms, patterns, flowers all which are represented.”

It seems like it would be a huge financial investment.

"Let’s just say I have probably have a new car’s worth of tattoos on my body!"

Are there parts of your body that you won’t get tattooed?

"I’m definitely not going to tattoo my face or my head, and I’m not sure whether or not I’ll tattoo my hands and neck. At this point I’m still able to cover up my tattoos with a long-sleeve, and since I do hand modeling and I am a hand double, I'd like to be able to cover them up for certain roles. Since I’m so distinct looking, if a show uses me for different roles I have to be covered up for the second time. If my tattoos are out everyone’s just going to say, ‘Oh, that’s just Octavia again.’"

Tell me about some of the societal struggles you face as being a tattooed woman. Have you faced discrimination?

"Oh, totally. One time I was showing an over-half-million dollar house on the Main Line to potential buyers. When we got there I was refused entry to the house by the listing agent who claimed I wasn’t a real estate agent. I was in business attire and acted professionally, but she didn’t want to let me in even though I showed her my identification, real estate license and paperwork. She finally let in, but proceeded to follow us around the house as if I was going to steal something. Yes, my tattoos were visible since it was summer, but that shouldn’t make a difference. It’s just a shame, she made me feel like a criminal." 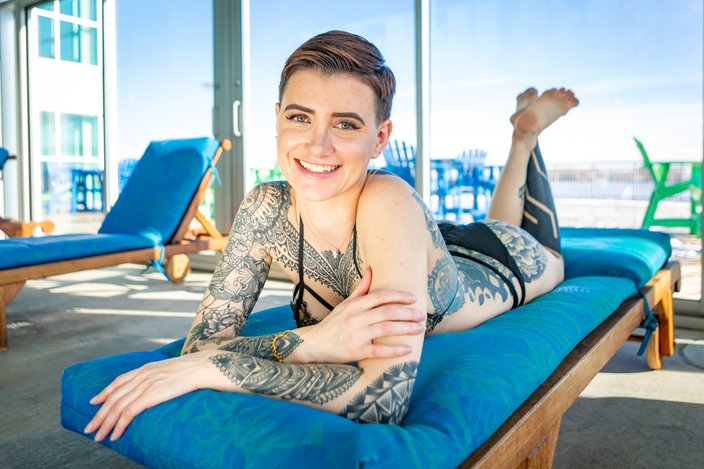 Plach is required to have a model release, signed by the artist, for each tattoo that is visible while working as an actor or model. “Recently one of my artists was giving me a hard time signing the release forms, so I’m blacking out those tattoos. If I don’t get the release, I can’t work.”

What reactions do you get in public?

"Some people are curious and think they’re really cool, but I can see others look at me with disgust on their face, like, ‘How do you live with yourself looking like that.’ But at the end of the day, it’s my body, it’s my life. And then sometimes people just assume I’m a tattoo artist and tattoo myself. They ask me to tattoo them!"

Do your tattoos make you perceive your body any differently?

"They have made me love my body more and feel more body-positive." 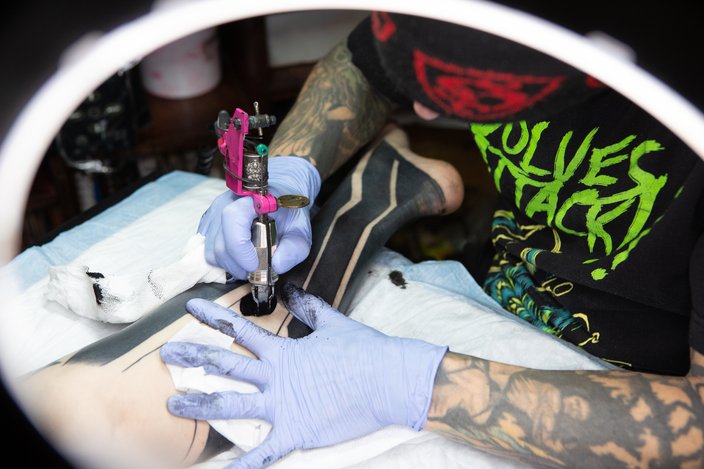 Plach during a tattoo session with the artist Hoode at the Black Vulture Gallery in Fishtown.

What is your daughter’s reaction?  Your parent’s reaction? What do they think of you being tattooed?

"My daughter loves my tattoos, but every time I get a new one she asks if nana knows about it - because my parents frown upon my tattoos. When I was younger I wasn’t able to color my hair, get my ears pierced, wear makeup or even wear clear nail polish.  So now, lot of people that knew me from when I was younger think my tattoos are an act of rebellion, but in fact, it’s not. I’m not doing it for anyone other than myself. It’s me cultivating my own identity. I went from growing up in a very conservative home to being in a very controlling marriage, so now that I’m on my own and finally have the opportunity to cultivate my own personality and individuality.

"But my mom finally acknowledged this past September that after having spent a lot of time down south at the beach and seeing 'so many trashy tattoos', that I have ‘nice artwork.’ This was huge, not only did she say they were nice, but she said they were artwork!"