Taylor Swift wins 6 trophies at 2022 American Music Awards, including artist of the year 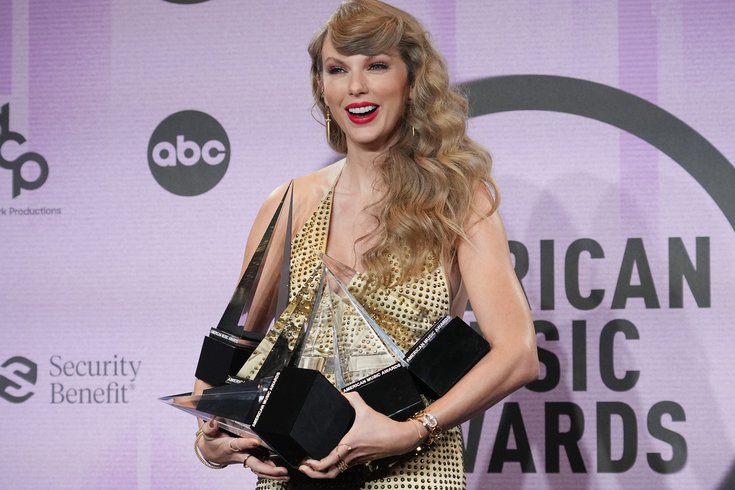 Taylor Swift took home six trophies at the 2022 American Music Awards, including her seventh artist of the year award.

Taylor Swift once again shone at the American Music Awards, taking home all six trophies for which she was nominated and becoming the first artist to surpass 40 wins.

The wins helped to cement Swift's legacy as the most decorated artist at the AMAs. The "Midnights" singer broke the record set by Michael Jackson in 2019. Jackson won 26 awards; Whitney Houston took home 22.

Though Swift crossed genres from country to pop music nearly a decade ago, with the 2014 release of "1989," she continues to gain support in country music circles. Last week, she was nominated for best country song at the 2023 Grammy Awards.

Swift skipped the red carpet at the American Music Awards, but she made a surprise appearance to accept the award for artist of the year, which was presented by country music duo Dan and Shay. In her acceptance speeches, she spoke highly of her large fanbase and her rise to stardom.

"You know, in the past few years, I have released more music than I did in the entire decade preceding that, and I really feel like that's down to the fact that you, the fans, made it clear that you wanted to hear lots of music that I would make," Swift said in her acceptance speech. "You encouraged me. And so, I found that the more music I made and the more music I put out, the happier I was."

This was the fifth consecutive time that Swift won best female pop artist, extending her record for most consecutive wins. Last year, she became the first artist to win it four straight times.

The victories came about one month after the release of her record-smashing 10th studio album, "Midnights," which became the first album to take over the top 10 spots on the Billboard Hot 200. That album came one year after the release of "Red (Taylor's Version)," the second of what is expected to be six rerecorded versions of her past work.

Swift did not mention the growing controversy surrounding the presale for her upcoming Eras Tour, which devolved into chaos Tuesday as fans and bots scrambled for tickets, causing Ticketmaster's system to glitch. Friday's scheduled ticket sale was canceled, prompting statements from the singer and Ticketmaster about what went wrong.

📲 Taylor Swift issues a statement via IG Story regarding her #TSErasTour presale and Ticketmaster.

“And to those who didn’t get tickets, all I can say is that my hope is to provide more opportunities for us to all get together.” pic.twitter.com/A5a7VmrKVI

The presale broke Ticketmaster's record for most tickets sold in a single day. But the U.S. Department of Justice has launched an antitrust investigation into LiveNation, which owns Ticketmaster, over concerns about its control of the multibillion dollar ticketing industry. The decision to open that investigation reportedly was made prior to the ticket snafu.

Other big winners at the 2022 American Music Awards included Bad Bunny, Harry Styles and BTS. They each took home a pair of awards. Elton John won his first American Music Award since 1988 for best collaboration with Dua Lipa on "Cold Heart — PNAU Remix," becoming the longest-recognized artist in the show's history.

The show opened with a performance from Bucks County native P!nk, and 17-time winner Lionel Richie was granted the icon award for his contributions to music and culture. Charlie Puth and Stevie Wonder were among the artists to perform his greatest hits at the show.