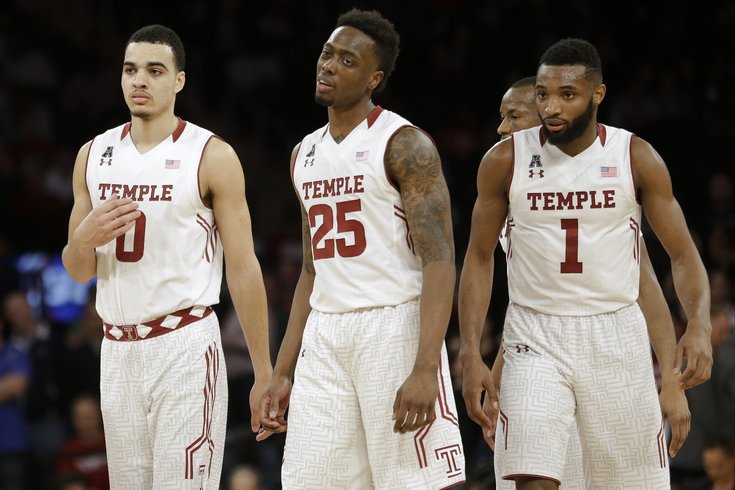 Temple's Obi Enechionyia (0), Quenton DeCosey (25), and Josh Brown (1) react during the second half.

The Temple Owls got out to an early double-digit lead against Miami, but were unable to overcome poor second-half shooting and fell to the 'Canes, 60-57, Tuesday night in the NIT semifinals at Madison Square Garden.

For the Hurricanes, the win means they'll face the winner of Old Dominion and Stanford for the NIT title on Thursday night. For Fran Dunphy and the Owls, it means their season is over.

Despite a career-high 17 points* from freshman Obi Enechionyia and an early injury to Miami center Tonye Jekiri that forced him to miss the rest of the game, Temple failed to hold their lead, one they held for nearly 26 minutes.

*It was also the high for the game.

Here are some observations from the game:

The one clear advantage the 'Canes had coming into the game was their size, specifically seven-foot center Tonye Jekiri, who led the ACC in rebounding this season with 10.1 per game. But for some reason, Miami came out thinking it was prudent to shoot only from the outside. Once they settled down, Jekiri started doing his thing, scoring four of his team's first nine points.

Then, with about 15 minutes remaining in the half, Jekiri took a Jaylen Bond elbow to the face and he would remain in the locker room for the rest of the night. That's when the problems started for Miami.

[UPDATE - 2:08 a.m.]: Miami will be without Jekiri, who suffered a concussion, when the face Stanford in the championship game on Thursday.

Temple opens up big lead, then lets it vanish

With Jekiri no longer clogging up the middle, Temple went on a 14-3 run as Miami went the next eight minutes without a field goal. That was until Sheldon McClellan’s baseline jumper with 7:23 left made it 21-14. The Owls then extended their lead to 27-16 thanks to six-straight points from Enechionyia.

The Hurricanes had now missed 12 of their last 13 shots since their big man left the game and scored just five points in that 10 minute span. But thanks to back-to-back Temple turnovers -- they committed just three total in the first 16:30 of the game -- Miami was a able to go on a 9-0 run to cut the Owls' lead to 27-25 with a minute left.

The half would finish with Temple in front, 30-25.

...because it's nothing compared to what Miami did in its quarterfinal victory over Richmond. They faced an 18-point deficit in the second half that night.

However, a team can only play from behind so much, and without* their center for the rest of the game, it didn't look promising for the Hurricanes. But thanks to an abysmal second half offensively from Temple, they were able to steal the win.

They chipped into Temple's lead throughout the second half, and with eight minutes left in the game, Jim Larranaga's team took its first lead (44-43) since it was 9-8 early in the first half. That lead came after a 12-3 Miami run that was capped off by back-to-back threes from McClellan and included this dunk from freshman James Palmer:

It got worse for the Owls, as Jaylen Bond limped off the court a few minutes later and would not return. Miami extended its lead to seven, 56-49, and it with just over three minutes remaining, things were not looking good for Temple.

But they would not go quietly, running off six consecutive points to make it a one-point game with 46 seconds left.

With only a few seconds left, the Owls found themselves with possession and a chance to tie the game at 60. Unfortunately for those watching back on North Broad, the Quenton DeCosey's three-pointer was off-target, spelling the end their season.

It was even worse in the second half, as the Owls shot just 22.5 percent (9-for-40; 0-for-15 from thee). Incredibly, the Owls were able to stay in the game, due in large part to the fact that they only turned the ball over once in the entire second half, and just six times in the game. They were also helped out by the fact that they shot 17-of-22 from the free throw line, as well as Miami's own offensive struggles.

Freshmen shine at the Garden

Both teams got major contributions from underclassmen Tuesday night.

Temple was led by Enechionyia, who had eight rebounds and five blocks to go with his game-high 17 points in 27 minutes. After the game, the Miami coach praised the Owls forward's performance. Marc Narducci of the Philadelphia Inquirer has more:

"We weren't able to guard him," Miami coach Jim Larranaga said. "He did a tremendous job."

Enechionyia shot 5 of 9 from the field and hit all seven of his free throws.

"Whenever I start getting going, the confidence goes up and everything gets a little easier," Enechionyia said. [via philly.com]

For the 'Canes, it was Neumann-Goretti grad Ja'Quan Newton, who was second on his team in scoring behind McClellan with nine points. Newton played 25 minutes, due in large part to the absence of starting point guard Angel Rodriguez, who was out with a wrist injury.

Freshmen Deandre Burnett and Omar Sherman combined for 14 points for Miami, who will have their entire team back next season with the exception of Joe Thomas, a grad student who played previously* at Niagara.

*Thomas played in high school with Rodriguez in Miami. He graduated from Niagara with a year of eligibility left and the Hurricanes point guard recruited him over the summer.