Ten things to watch in the Eagles' first preseason game 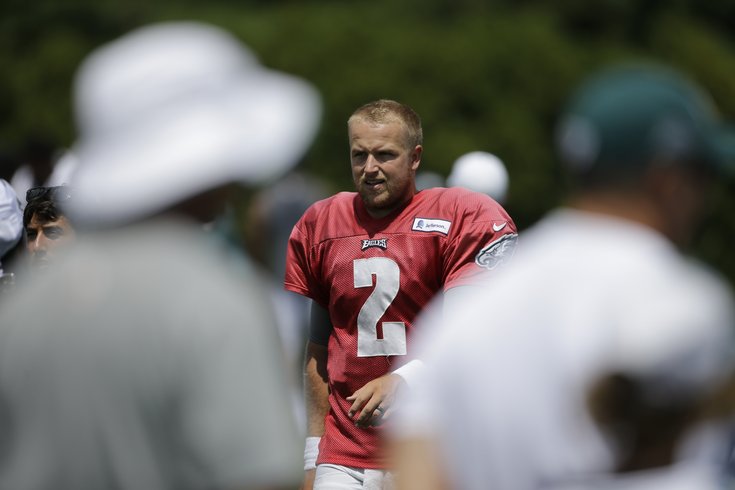 For the first time in roughly eight months, Eagles fans will get to watch their guys put on the shiny pants and play against other living, breathing players on another team. For a quarter or so, anyway, before all the reserves come in. Preseason football! Here are ten things I'll be watching:

The Colts are looooooaded with quality wide receivers: TY Hilton, Andre Johnson, Donte Moncrief and Phillip Dorsett, to name a few. Oh, and their quarterback is pretty good too, I hear. This will be a great test for the Eagles' slot corner applicants, and really just their secondary in general.

9) The youngins at WR

Jordan Matthews, Nelson Agholor and Josh Huff have all been very good in their own ways during training camp, which is a great sign not just for the 2015 season, but for the future of the wide receiver position in Philly. They need to keep their positive momentum going in the preseason games.

8) Trent Cole and the Toddfather

Trent Cole and Todd Herremans were formerly the longest tenured players on the Eagles, and both carved out excellent careers in Philly. For the sentimental types out there, you'll get to see both guys return with the Colts on Sunday. Oh, and Colt Anderson too.

7) Can Walter Thurmond be physical?

One of the pleasant surprises of camp so far has been Thurmond's encouraging play at safety. He has been very good in coverage, is always around the ball, and just looks the part. What we can't see in practice, however, is tackling. Tomorrow will be Thurmond's first real opportunity to show that he can also be a physical presence on the back end.

Wolff has never been able to stay healthy with the Eagles, and he's been nearly invisible throughout camp. The Eagles are very thin at safety, and yet, it feels like Wolff will have to do something extraordinary during the preseason games to survive final cuts.

The Eagles didn't just replace players on offense and defense. They also replaced a bunch of their notable special teams players. In are guys like Seyi Ajirotutu, Brad Jones, E.J. Biggers, and the coaching staff likes what they've seen from Jordan Hicks so far. Out are quality vets like James Casey, Brandon Boykin and Brad Smith.

The Eagles have been trying to trade Matt Barkley for well over a year now, and have found no takers. Barkley has actually had his best camp since he's been in Philly, but his time may be up. Expect the Eagles to give Barkley a lot of playing time and hope some other team out there likes what they see.

I would imagine Mr. Smith is going to play a lot this preseason, and it would behoove him to play well. Smith believes he has improved as a pass rusher from year one to year two, and Sunday will afford him his first real opportunity to get after an opposing quarterback. However, it's not just about getting sacks. The Eagles thought of Smith as a Connor Barwin-esque jack of all trades type when he was drafted. Smith also has to show he can set the edge in the run game and drop into coverage.

If you like reading training camp practice notes from me or the other Eagles writers, there's a good chance you didn't see much about the offensive linemen, other than who was taking reps with the first or second team offenses. That's because offensive line play is nearly impossible to evaluate in training camp without a real pass rush or physical run blocking. The offensive line is a huge concern this season. The Eagles are replacing two starters (albeit at the two least important spots), and don't appear to have much in the way of depth, especially at tackle. This will be our first really good look at the big guys up front.

1) Sam Bradford's debut with the Eagles