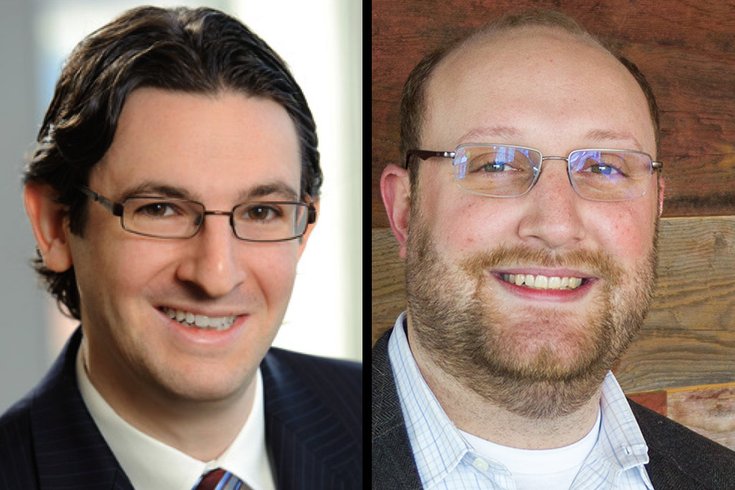 Jordan Feirman of New York, left, and Aaron Peskin of Philadelphia, both 2007 graduates of the University of Virginia law school, believe strongly that President Donald Trump needs to be regularly reminded that he lost the popular vote in November’s election by nearly three million votes.

They initially considered their mission something akin to “trolling with a purpose,” and they’re seeking three million like-minded folks to join the effort.

Jordan Feirman and Aaron Peskin are friends from their law school days at the University of Virginia.

The 2007 graduates – Peskin lives in Philadelphia while Feirman calls New York home – are philosophically united in the thought that President Donald Trump needs to be regularly reminded that he lost November’s popular vote by nearly three million ballots.

And the pair says the world needs to be forcibly reminded each time the president tells a lie.

“While comical, we came to realize that Trump's reaction (to popular vote disparities) was just the latest part of his long campaign to undermine reality – to launch an assault on the very notion of objective facts and common sense through ‘alternative facts,’” they wrote in their description of the “Three Million Project” upon its January 25 launch on Facebook.

In a tangible sense, they provided a template for a letter that people can send directly to the Trump at either the White House or Trump Tower.

The snark therein is palpable in contextualizing the popular vote deficit which prompted Trump to call for an investigation that same day. To wit:

If those 2,864,974 people lined up to vote consecutively, and each voter took only one minute in the voting booth, it would take nearly 5 and a half years for them to finish.

That is greater than the population of at least 15 States and the District of Columbia.

That is the population of Melania’s home country of Slovenia… if it was increased by approximately 38%.

That is the number of (well-vetted and deserving) Syrian refugees resettled in the United States between October 1, 2011 and December 31, 2016 . . . multiplied over 159 times.

Though they admit the effort “started as a kind of a joke,” they see the administration fostering mistrust in the very notion of facts, which they consider a way to “subvert our democracy with lies and misdirection.”

Figuring that it’s easy to get under Trump’s skin, Feirman tried to launch a WhiteHouse.gov petition seeking a “formal proclamation that he lost the popular vote.”

"If it keeps going this way, if you keep ignoring facts, there is a much more sinister endgame at play here." – Aaron Peskin

While that didn’t take off, the pair spitballed some ideas and ultimately settled on an approach that blends humor while remaining true to their belief that pretending facts are fiction has a chilling effect.

“The overall fear we have is that distortion of facts starts with the little lie and builds from there,” said Peskin. “Yes, getting under his skin makes us feel better, but there’s a point here: When you’re undermining reality and objective facts, you’re undermining the foundations of open society and democracy.

“It’s easy to laugh at the inauguration-crowd fight. But the truth is if it keeps going this way, if you keep ignoring facts, there is a much more sinister endgame at play here. That’s why we’re trying to expand what we’re doing. While we’re concerned about individual issues – tax policy, immigration – facts are not a partisan issue.”

They aim to morph into a "rapid response team to combat Trump every time he tries to lie to the American people and berate us for factchecking.”

They’re still formulating what form that will take, but they’re discussing flooding elected officials with correspondences countering every lie told.

Their Facebook mission has gotten roughly 650 likes in about a week, adding more than 20 a day. They said they’ll use memes sparingly and engage with trolls even less.

Both said they hope their idea gathers steam so there’s an army of fact-checkers in the fold that will catch even minuscule deceptions and correct the record publicly.