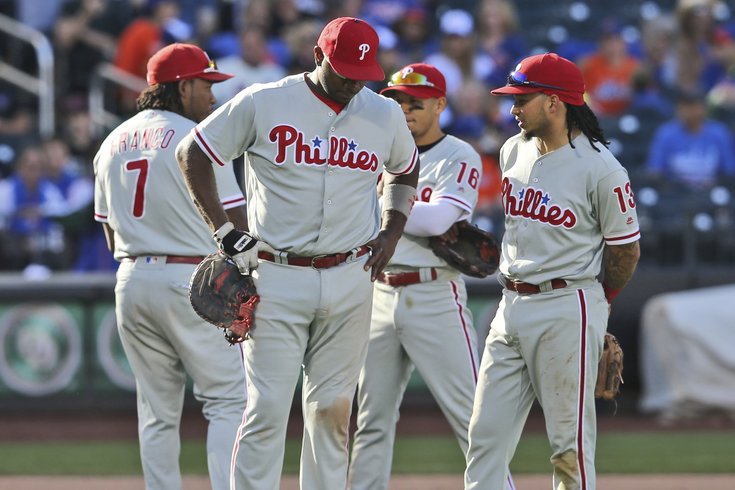 Philadelphia Phillies' Ryan Howard, second from left, and other teammates wait during a pitching change in the eighth inning.

NEW YORK – Although his name was listed on the front page of the pregame notes as the starting pitcher in the penultimate game of the season on Saturday at Citizens Bank Park, Jake Thompson’s status for that start was actually “up in the air.”

Those were the words Phillies manager Pete Mackanin used regarding his 22-year-old right-hander, who earned a promotion to the major league seven weeks ago after blitzing through the International League all summer.

Jake Thompson entered Sunday’s afternoon’s game having allowed three runs or fewer in five consecutive starts after a rough first three-week introduction to the big leagues preceded that stretch. But Mackanin made it sound like any signs of trouble could lead the Phillies into factoring in his hefty workload into deciding his next step.

Following his uneven outing on Sunday, Thompson made the decision easier for Mackanin and company. Thompson labored through four innings, coming out after walking three batters in his fourth and final inning, as the Mets whupped the Phils 17-0.

"That’s the only news I feel like talking about," Mackanin said following the worst defeat of a mostly forgettable 2016 season. "I think he’s had 40-plus innings more than last year."

But it's also a jump that should help him continue to grow even more as a major league starter in 2017.

"Physically I knew I was capable of it," Thompson said. "I’m thrilled they let me go this far. They certainly didn’t have to. And that’s going to be something going into next year where I’m going to plan on throwing 30 more than I did this year."

But back to the rest of Sunday's (historically bad) game.

The Mets out-hit the Phillies 14-3. The Phillies pitching staff gave up 44 runs in the four-game series.

Sunday's loss was the most lopsided for the Phillies since 1999. And it's their largest shutout loss in franchise history (or at least when baseball-reference's database begins in 1913).

"Pretty embarrassing game today," Mackanin said. "No offense on our side to talk about. The bullpen – had issues. Just a tough series."

Thompson and the Phillies trailed just 1-0 after three innings. But Curtis Granderson led off the fourth with his 30th home run of the season.

After responding with an out, Thompson then allowed four of the next five batters to reach via hit or walk. Jose Reyes finished it off with the third walk of the inning, this one with the bases loaded, to bring in the Mets third run of the afternoon.

When Thompson exited, the Mets did what they’ve done throughout the series: they murdered the Phillies bullpen. Phil Klein, Colton Murray, and Frank Herrmann, Patrick Schuster and Luis Garcia, five names you probably won’t see on the spring training roster in Clearwater in five months, allowed 14 runs in the next four innings.

"It’s another audition," Mackanin said of evaluating pitchers this month. "We want to see who might fit in."

And after his bullpen allowed 27 runs in 17 innings in New York (14.29 ERA) during a four-game series when his pitching staff allowed 44 runs?

"I wish you didn’t even bring that up," Mackanin said. "Obviously, the bullpen has scuffled for a while now. Everything looks bad. That shows you how much the game is all about pitching. It keeps you in games. It gives you the opportunity to win like the first couple months of the season for us. And now the last month it hasn’t kept us in games or it’s losing games. Pitching is the most important ingredient."

The big blow off the Phils' pen – and there were several – came off the bat of noted Phillies killer Asdrubal Cabrera.

Cabrera’s grand slam off Herrmann in the seventh inning was his 23 home run of the year. Six of Cabrera’s 23 home runs have come against the Phillies.

Thompson had Cabrera’s number on Sunday, however, retiring him in each of the three at-bats prior to his seventh multi-hit game against the Phillies this year.

Thompson allowed three earned runs on five hits and three walks, while striking out one, in his four innings. Thompson, the top pitching prospect acquired in the Cole Hamels trade 14 months ago, has a 5.70 ERA after his first 10 major league starts.

But the most troubling numbers are his walks: Thompson has walked 28 batters in 53 2/3 innings with the Phillies after walking just 37 in 129 2/3 innings at Triple-A Lehigh Valley. Perhaps it was just a case of a 22-year-old kid getting his first taste of the major leagues, though.

"Maybe a little bit," Thompson said. "As far as the walks today I got into spots where I was really trying to get a double play ball, work the corners, get a miss-hit. and I think their hitters probably picked up on that and were a little less aggressive and that led to some walks."

• Jake Thompson recognized the sudden, tragic death of Marlins ace Jose Fernandez before taking the mound on Sunday when he sent out a tweet three hours before the game.

Prayers to the Fernandez family. He was helping change the game for the better. What a tragic loss #ripjose

"I always thought, at least right now, there are three or four young guys changing the face of the game, bringing that excitement, that fun back into it," Thompson said. "(Bryce) Harper is one of those guys, (Mike) Trout is one of those guys. (Jose) Fernandez. You watched him play and you can tell he was having fun. He was one of the best. You could just tell how much he wanted to be out there. ... We lost one of the, it's cliche to say, but you look at the start of his career and he could have been a Hall of Famer."

Odubel Herrera, who got his parents a photo with Jose Fernandez at the All-Star Game two months ago, also spoke about the late Marlins ace on Sunday.

• When Freddy Galvis stole third base in the first inning of Sunday's game, he became the only shortstop in the major leagues with at least 15 stolen bases and at least 20 home runs this season. The 13 other major leaguers with at least 20 homers and 15 steals this season: Brian Dozier, Mookie Betts, Ryan Braun, Charlie Blackmon, Mike Trout, Wil Myers, Jose Altuve, Bryce Harper, Jason Kipnis, Paul Goldschmidt, Gregory Polanco, Ian Desmond, and Melvin Upton.

Of those other the 13 players, Melvin Upton (.291 OBP) is the only other with a sub-.320 OBP. Galvis's .275 OBP ranks 146th out of 146 qualifying major league players. But with power and Gold Glove-worthy defense, the Phillies have been willing to take the bad with the good.

• Cesar Hernandez (0-for-4, two strikeouts) saw his career-best 29-game on-base streak come to an end on Sunday. It was the longest streak by a Phillies hitter since Chase Utley reached in 29 straight games from August 31-Oct. 2 in 2010.

• Prior to Sunday, the worst shutout loss in Phillies history (since baseball-reference's data began in 1913) came on May 4, 1929, when the Cubs handed the Phils a 16-0 defeat. Rogers Hornsby homered and Hack Wilson drove in two runs for the Cubs on that afternoon at the Baker Bowl in a game that lasted 2 hours and 20 minutes – or 72 fewer minutes than Sunday's game at Citi Field.