Thousands of recovered addicts to celebrate on Philly walk 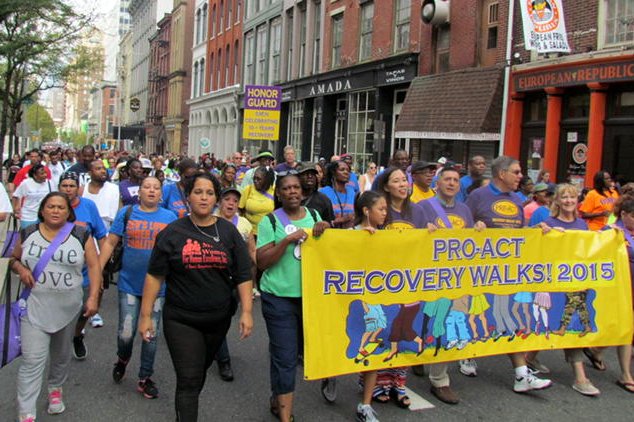 Some 25,000 participated in the PRO-ACT Philadelphia Recovery Walk in 2015. Event organizers are hoping to top the number on Saturday.

Thousands of people celebrating their recovery from drug addiction — or supporting someone in recovery — will parade through Center City on Saturday morning.

Organizers of the PRO-ACT Philadelphia Recovery Walk hope to match the record 25,000 people who came out last year to demonstrate that people can — and do — recover from drug addiction.

There are some 127,000 people in Philadelphia who identify as being in recovery, according to PRO-ACT, a grassroots advocacy and recovery support initiative of The Council of Southeast Pennsylvania.

"But that's not the message that's out there," PRO-ACT project director Beverly Haberle said. "There is something transformative, if you are someone in recovery who has struggled with stigma, shame and guilt, to be among all the other people in recovery."

The heroin epidemic sweeping the United States has generated considerable attention from public officials, the media and, most certainly, families with loved ones battling addiction. More than 700 people in Philadelphia died from a heroin overdose last year, a staggering increase from the 459 overdose deaths in 2014.

The horrors of addiction and its tight grip often dominate portrayals of the disease. But Recovery Walk participants want those battling drug addiction to know that recovery is indeed possible.

"Our expectation should be to have life-long recovery," Haberle said. "Learning to manage this illness — just like people learn how to manage diabetes, asthma and hypertension. This disease has a very high proportion of having people successfully do that."

Some 300 men and women in long-term recovery — a period of at least 10 years — will lead the walkers out of the Great Plaza  at Columbus Boulevard and Chestnut Street on Penn's Landing at 9 a.m. After crossing the overpass above I-95, the group, known as the "Honor Guard," will separate and cheer everyone as they pass. The marchers will head up Front Street and snake through Old City before heading back to Great Plaza where they will be welcomed by the "Honor Guard."

"There's a real obligation for people who have experienced addiction to support other people who are coming after them," Haberle said. "People with 10 years recovery or longer are all able to have a sash (showing) the number of years of recovery that they've got. ... In leading the walk, they're able to really lead the way for others."

The marchers' passing by Independence Hall and the Constitution Center are particularly symbolic, given the stigmas and discrimination people with addiction can face, Haberle said.

"Standing up for recovery really benefits everyone," Haberle said. "We're in the middle of an epidemic right now. It's time for us to make sure that message is changed. When you're in the height of stigma and discrimination, people don't get help early. That's what needs to happen if we're going to turn around this epidemic that we're facing."

The Recovery Walk began in 2001 with 100-150 participants. Nearly all of them were people in recovery.

"We have people who are from all walks of life, all cultures, all ethnicities," Haberle said. "This is a nondiscriminating disease. It cuts across the whole realm of society."