'I don’t think anybody wants to see the consequences we’ve seen recently,' he said of images from U.S.-Mexico border 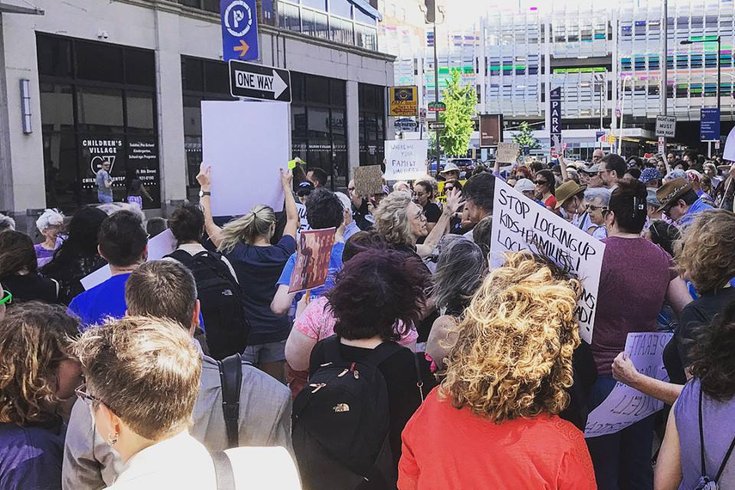 Protestors gathered outside the U.S. Immigration and Customs Enforcement’s local offices to question a White House policy that separates families at the border.

U.S. Sen. Pat Toomey is on the record opposing Philadelphia’s sanctuary city status, but when it comes to separating children from their parents at the border, he said Monday that Congress needs to take action.

In light of protests planned for Vice President Mike Pence’s appearance at a Rittenhouse Square fundraiser on Tuesday, PhillyVoice reached out to the Republican senator’s office seeking his thoughts on the issue.

His press secretary, Steve Kelly, shared audio from the senator's monthly appearance on an AM talk-radio show in Erie.

Toomey noted that “it’s not the case that everyone who arrives at the border has parents and children separated.” He said asylum seekers “who arrive lawfully” are not separated. He also drew a parallel to arrests not related to immigration.

“If a woman in Pennsylvania breaks the law and commits a crime and she’s arrested and prosecuted, her children do not go into her prison cell with her,” he told host Barry Steinhagen on 1400AM WJET on Monday morning.

“She is separated from her children. That is a painful exercise. How do you avoid it?" he continued. “It is obviously very, very difficult to impose this on the children.”

Toomey said, however, that he thinks the policy that’s the source of major controversy across America right now can be modified.

“I don’t think anybody wants to see the consequences we’ve seen recently.”

There has been some activity in Congress related to those consequences, including the introduction of the “Keep Families Together Act” from Sen. Dianne Feinstein, a Democrat from California.

UPDATE: 43 senators now support our bill to bar children from being taken from their parents at the border. We still need a Republican senator to join. If you’re represented by a Republican senator, please ask them to cosponsor S.3036. #FamiliesBelongTogether

On the other side of the aisle, U.S. Sen. John Cornyn of Texas is said to be working to amend the “Humane Act” that, initially introduced in 2014, would speed up hearings for undocumented children. Also expected to offer up options are James Lankford and Ben Sasse, from Oklahoma and Nebraska respectively.

Toomey hasn't signed onto Feinstein's bill, but will look at what this trio produces.

“Sen. Toomey looks forward to reviewing them when they are introduced,” Kelly said.