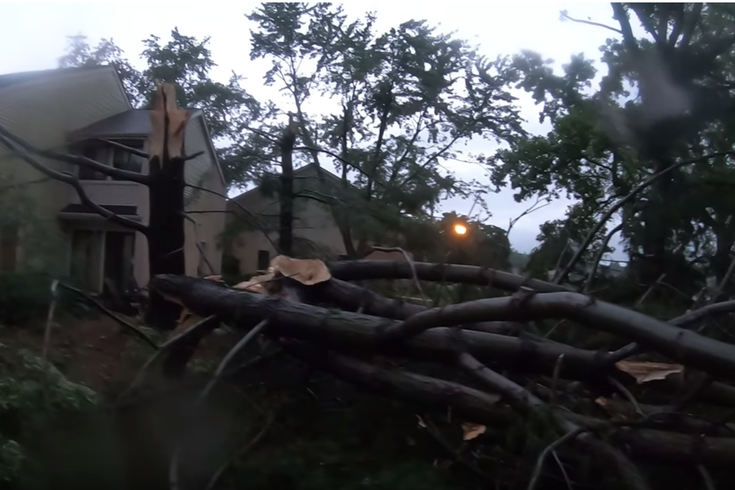 A tornado ripped through Mount Laurel in Burlington County on Thursday night, according to the National Weather Service, taking down trees and damaging apartments. It's the town's second tornado in a six-day span.

The National Weather Service confirmed that an EF-1 tornado touched down in Mount Laurel, New Jersey, during Thursday night's severe storms, the second tornado to touch down in the Burlington County township in a six-day span.

The NWS called the tornado "brief and discontinuous", and said it touched down in the town's Ramblewood and Birchfield neighborhoods, in a statement released Friday afternoon.

According to the NWS, the tornado lasted three minutes, traveled 1.3 miles, and reached an estimated maximum wind of 90 mph. No injuries were reported.

EF-1 tornadoes are the second-weakest tornado classification on the Enhanced Fujita scale, which ranges from EF-0 to EF-5. An EF-1 tornado is termed "weak" and involves winds from 86 to 110 mph.

Here's a full summary of Thursday's tornado and its path, from the NWS:

"The tornado began in a relatively open area on the Ramblewood Golf Course, where tree damage and some soffit damage occurred to a home. The tornado then crossed the golf course into a wooded area. When the tornado emerged on the other side, more tree damage occurred, including a hardwood tree snapped off onto a house. Several other trees around Yorktown Drive and Holiday Street sustained considerable damage.

"The tornado then crossed Church Street into the Birchfield neighborhood. A few trees were uprooted and one large pine tree was snapped about 10 feet up from the ground near Viburnum Lane and Sumac Court. Numerous other small trees were uprooted and large hardwood tree branches were brought down in this area. A few apartment buildings sustained minor soffit and gutter damage as well. The tornado then crossed a small lake, then snapped a large hardwood tree near Marigold Court and Lake Drive. The tornado then lifted after uprooting a couple softwood trees along Meadowrue Drive."

One Mount Laurel resident documented some of the damage:

The tornado is the second to touch down in Mount Laurel within a week, following an EF-0 tornado that swept through the town on July 6.

New Jersey has now seen five tornadoes already this year, more than double the state's yearly average of two, according to CBS3.

Pennsylvania has also seen an uptick in tornadoes this year, surpassing its yearly average of eight back in late May.

What exactly is causing the regional increase in tornadoes is unclear to scientists. We don't think, as one Pennsylvania man thought, it's because of traffic circles.