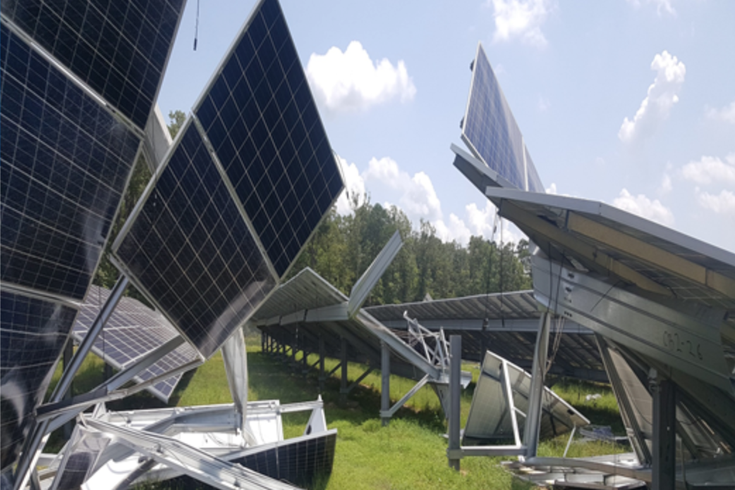 A South Jersey tornado hit land in Millville on Wednesday, near the city's sewer department facility.

The National Weather Service in Mount Holly confirmed Saturday that a tornado touched down in South Jersey's Cumberland County during this week's storms, and another touched down in Mercer County.

The South Jersey tornado hit land in Millville on Wednesday, near the city's sewer department facility, according to the NWS's report. The tornado was rated an EF-0 on the Enhanced Fujita scale, which ranks tornados from EF-0 to EF-5 in terms of severity.

Here's the NWS's full summary of the tornado, which the weather service termed a "weak" tornado:

"A weak tornado briefly touched down in Millville, New Jersey, on Wednesday evening. The tornado touched down in a field of solar panels adjacent to the Millville City Sewer Department facility. Several rows of solar panels sustained damage either from the tornado or from the falling debris of other panels, with a couple rows of panels largely destroyed. The tornado continued into a wooded area. A twisting patern observed in the damage to the solar panels was sufficient to determine that the damage was caused by a tornado. In addition, an eyewitness looking in the direction of the damage from near the nearby Millville Executive Airport reported a possible funnel cloud sighting as the storm passed the area."

The NWS reports that no injuries occurred as a result of the tornado.

Wednesday's second tornado touched down at the Voorhees Greenhouse in Hightstown, shattering the Greenhouse's glass roof and tossing metal support beams into the air. One woman was cut by flying glass, according to the NWS, but "no serious injuries" occurred.

These tornados marked the seventh and eighth tornados to touch down in New Jersey this year, quadruple the state's yearly average of two, according to CBS3.

Pennsylvania has also seen an uptick in tornadoes this year, surpassing its yearly average of eight back in late May.

What exactly is causing the regional increase in tornadoes is unclear to scientists. We don't think, as one Pennsylvania man thought, it's because of traffic circles.