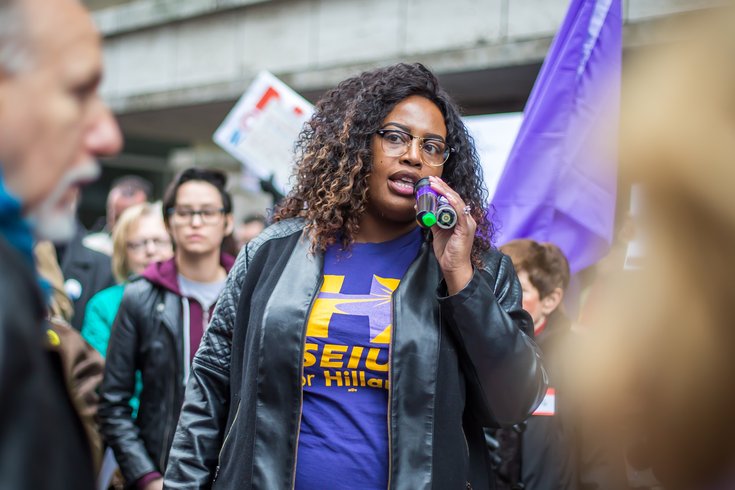 Karla Harris, a member of SEIU Philadelphia, speaks at Tuesday's rally outside the Center City office of Pennsylvania Sen. Pat Toomey. Constituents are demanding that the senator meet them face-to-face to hear their concerns.

But that was not enough to quell the repeated calls to hold a traditional forum, which have grown louder since President Donald Trump was inaugurated one month ago.

About 200 people gathered outside Toomey's Center City office on Tuesday for a weekly demonstration that once again urged the lawmaker to meet face-to-face with his constituents. And an online petition seeking a town hall has grown to include more than 13,000 people.

"I don't know a person who got their question addressed," Angela York Crane said of Toomey's telephone town hall. "We don't think it's adequate. We think it's an attempt to make an appearance to satisfy the optics."

Toomey fielded 10 questions last Thursday during a telephone town hall that was announced about 90 minutes before it kicked off.

It lasted just under 45 minutes, with Toomey responding to inquiries on health care reform, the confirmation of Education Secretary Besty DeVos and allegations that his staff doesn't pick up the phone, among other issues.

York Crane, 55, of Philadelphia, is among a small group of women who have organized weekly demonstrations, dubbed "Tuesdays With Toomey," to hold the senator accountable to his pledge that he would not be a "rubber stamp" for Trump.

"A month ago, he spent a weekend in Palm Beach with the Koch brothers. He can come speak with his constituents." – protester Angela York Crane of Philadelphia

Their protests, which began with about a dozen people in the wake of the election, have swelled to a couple hundred people. Each week, they submit letters addressing a topic of concern and renew their call for a town hall meeting.

They have no intention of stopping anytime soon.

"A month ago, he spent a weekend in Palm (Springs) with the Koch brothers," York Crane said. "He can come speak with his constituents."

Tuesday's demonstration focused on the First Amendment. Speakers decried threats to Muslims, praised freedom of the press and stressed the importance of free assembly. 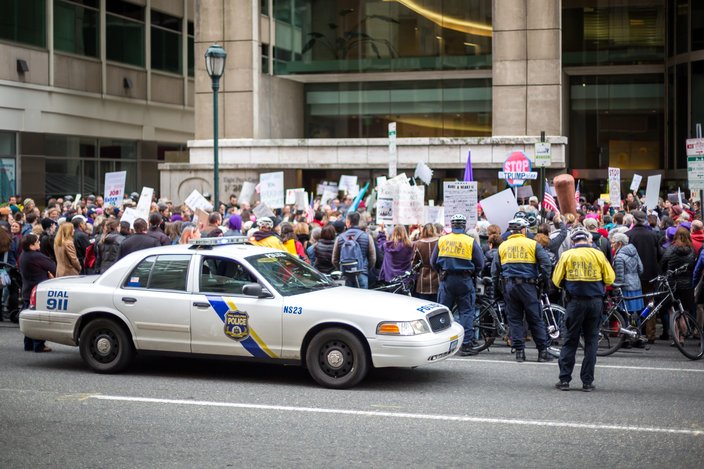 Protesters gathered outside the office of Sen. Pat Toomey, (R-Pa) at 8 Penn Center in Center City on Tuesday, Feb. 21, 2017.

'I THOUGHT IT WAS SNEAKY'

Doug Kingsbury, 60, of Philadelphia, joined the weekly protest for the second time. He held a sign demanding Toomey hold a town hall and voiced his displeasure at the senator's telephone forum.

"I thought it was sneaky or disgraceful that he only announced it (90 minutes) before it took place," Kingsbury said. "I thought he made a lot of excuses or was dismissive of a lot of the phone calls and communication that he's receiving from his constituents, dismissing it as out-of-state."

Toomey, like other local Republicans in Congress, has drawn the ire of a vocal — and seemingly sizable — portion of constituents who are frustrated that he has not stood up to Trump. His critics note that, so far, Toomey has voted to confirm each of Trump's appointees.

During his telephone town hall, Toomey said he was "disappointed" Trump has not been more critical of Russian President Vladimir Putin, saying the United States needs to "push back aggressively."

He also criticized Trump's controversial travel ban, saying it "was too broad and poorly explained," although he supported increased vetting of refugees and a temporary suspension of "certain individuals from states that sponsor or provide safe havens to terrorists."

Toomey's actions follow a campaign that painted him as a senator willing to work across the aisle, stressing his efforts to broaden background checks on guns. But Toomey also dodged questions about his presidential vote until minutes before the polls closed. 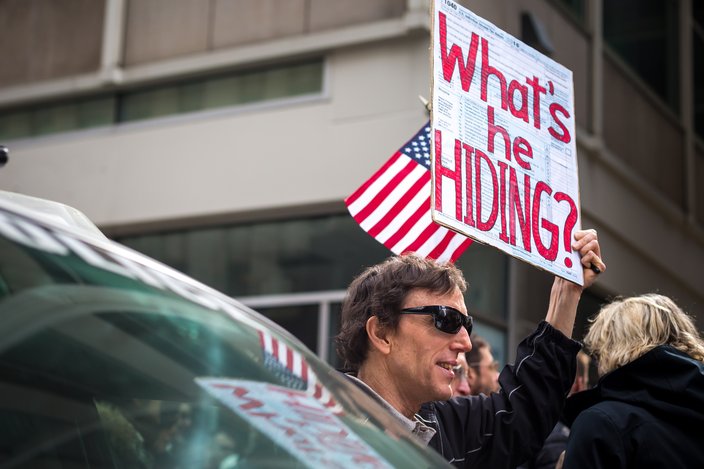 "It's important that we have our voices heard," said Judy Shulman, 62, of Philadelphia. "There are a number of us who are very upset about what is happening."

Toomey's office stressed that the senator has visited all 67 counties at least twice during the last six years, holding 14 town halls. The most recent came in 2015, when Toomey held town hall meetings in Sunbury and Warren counties.

None have come in Philly.

Many of the protesters hold a more liberal political ideology than that of the conservative Toomey, who was first elected to office during the Tea Party surge in 2010. But the origins of "Tuesdays With Toomey" trace to his pledge to oppose Trump when necessary.

And if "Tuesdays With Toomey" demonstrate anything, they find it necessary to oppose many stances taken by Trump.

"I feel we're in particularly dangerous times for our democracy," Kingsbury said. "It's important for all of us to speak out."