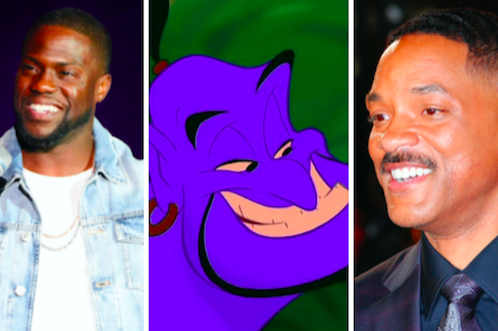 Will Smith and Kevin Hart were both approached by Disney for live-action remake of "Aladdin."

Disney's turn to live-action remakes of its animated classics is already proving to be a sweet spot for the Mouse House after the roaring box office success of "Beauty and the Beast," starring Emma Watson and Dan Stevens in the leading roles.

The stakes are going up for its eventual reboot of "Aladdin," which is always solidly in contention for the best of the bunch from that era, alongside "The Lion King" and "Toy Story."

Two big-time Philadelphia-born actors have been linked to the role of Genie, the story's enchanting guide famously voiced by the late Robin Williams. Both Kevin Hart and Will Smith have reportedly been in talks to play the burly trickster, with Smith holding the edge at this point, according to Screen Rant.

On Twitter, fans of both actors chimed with their preferences for the role.

@GeekFeedDotCom No one will ever beat Robin Williams' portrayal of Genie, but I think that Will Smith would do the character justice.

I have said this & I will say it again. If James Monroe Iglehart can't play the genie in the Live action Aladdin film, Kevin Hart should!

@gamesEnlisted @AniMat505 I think Kevin Hart would be pulled back if he was Genie, because I doubt Guy Richie would let Kevin Hart go full Kevin Hart

Honestly I think Kevin Hart should be the genie over Will Smith. But I think Jim Carey would also be dope as genie. Maybe Jack Black.

A Kevin Hart genie is funny but it wouldn't work https://t.co/IDUCX5eoNg

@disneyfilmfacts @KevinHart4real Why Kevin Hart? You could not get a more misplaced actor for the role of the iconic Genie!

@disneyfilmfacts @KevinHart4real I like Kevin Hart but I don't know if he would be perfect to play Genie. I kinda prefer Will Smith.

Kevin Hart should have been named the Genie. Not Will Smith. pic.twitter.com/HXapQC5yit

This is a pretty tough call. Smith's path toward more serious roles makes it harder to picture him as Genie now, but the original release of "Aladdin" in 1993 would definitely amp up the nostalgia. Hart's personality seems to be a better fit, and he might actually fit inside a bottle, but Genie's size in the original was part of what made him such a loveable character on the screen.

Disney is expected to round out a diverse cast for "Aladdin," having learned from the accusations of "whitewashing" it received after 2010's "Prince of Persia." No timetable has been announced for the film, which will be directed by Guy Ritchie and produced by Dan Lin.

The real question is whether anyone can do justice to the brilliance of Robin Williams.