Two decades ago, Taco Bell convinced America that it had bought the Liberty Bell 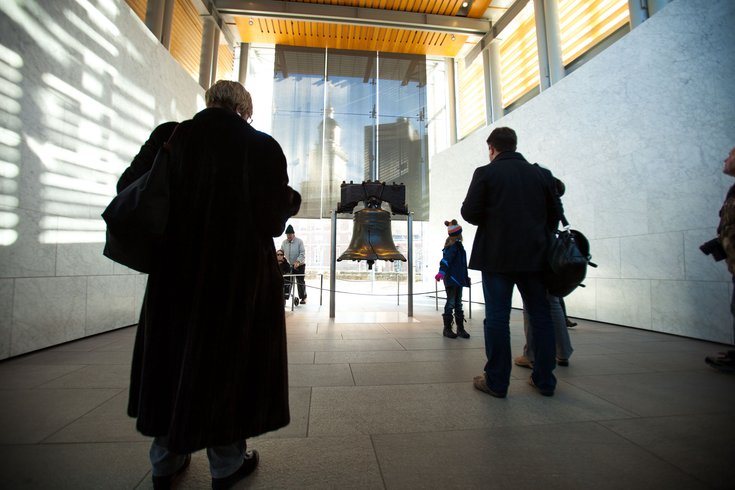 Some 18,000 people visit the Liberty Bell on any given day, according to Independence National Historical Park.

Who knows what pranksters have in store for Sunday.

Many companies have taken to generating cheap buzz by pranking the public on April Fool's Day, with social media providing a particularly intriguing forum.

But few jokes can top a hoax pulled off by Taco Bell two decades ago, when the fast food chain decided to have some fun at the expense of Philadelphia and, really, the entire nation.

On April 1, 1996, Taco Bell purchased full-page advertisements in seven major newspapers, including The Philadelphia Inquirer, announcing that it had purchased – and renamed – the Liberty Bell.

"It's probably one of the most ingenious advertising campaigns that I've ever seen," recalled Palmer Forbes Jr., interpretation and education ranger at Independence National Historical Park. "This really kind of took the cake here. It spread like wildfire."

The cracked American relic would now be called "The Taco Liberty Bell," according to the advertisement.

"In an effort to help the national debt, Taco Bell is pleased to announce that we have agreed to purchase the Liberty Bell, one of our country's most historic treasures," the ad read. "It will now be called 'The Taco Liberty Bell' and will still be accessible to the American public for viewing. While some may find this controversial, we hope our move will prompt other corporations to take similar action to do their part to reduce the country's debt."

News of the alleged purchase had ears ringing across the country. Talk show hosts questioned the country's values. And the National Park Service, which houses the Liberty Bell, received hundreds of phone calls from furious Americans.

"We will be doing a series of these things," McCurry joked. "Ford Motor Company is joining today in an effort to refurbish the Lincoln Memorial. ... It will be the Lincoln Mercury Memorial."

Still, even in the days long before social media, the hoax incensed the American public.

"We are encouraged by the outpouring of concern and I assure everyone that the ad is as false as it is cheesy," former National Park Service Director Roger Kennedy said at the time. "The Liberty Bell belongs to all Americans. It is not now, nor will it ever be for sale under any circumstances, period."

At Independence National Historical Park, rangers like Forbes were pulled from typical duties to field hundreds of phone calls.

"The one I remember the best was (that) NBC News in New York called me and asked if it was true," Forbes said. "I remember saying to those guys, 'Have you looked at the calendar today?'"

'SLAP IN THE FACE'

Taco Bell may not have bought the Liberty Bell. But the company did purchase quite a bit of exposure.

The ad campaign cost about $300,000, according to the Chicago Tribune. But it generated about $25 million worth of advertising according to Taco Bell executives and sales increased by $600,000 the following day.

"The idea to do some kind of April Fool's joke actually had come from John Martin's mother. He was Taco Bell's CEO," David Paine told the Chicago Tribune. "I don't know who actually said 'Taco Liberty Bell,' but it was the most successful project I've been involved with." 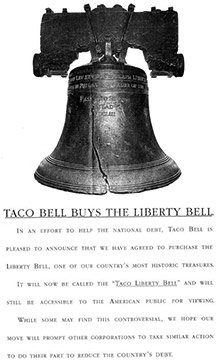 The ad that set off a national clamor.

The hoax generated news stories across the country. Tom Brokaw even devoted a tongue-in-cheek segment to the prank on "NBC Nightly News."

"Where will it end?" Brokaw said as he introduced the segment. "Big corporate sponsors have taken over the football bowl games. Baseball stadiums now have become billboards with outfields. Every cafe seems to be a planet or a rock. But wait until you hear what has happened to one of the most cherished symbols of American freedom."

The segment featured the incredulous reactions of people as they learned of the supposed sale. One man called it "a slap in the face." Another man said he would have bought the Liberty Bell had he known it was for sale.

But former Mayor Ed Rendell played along, voicing his approval.

"I think corporate sponsorships are the way of the future in many things," Rendell told NBC. "I am a Taco Bell consumer."

By the time NBC broadcast the segment, Taco Bell had copped to the hoax.

In admitting the prank, company officials announced they would donate $50,000 for upkeep of the bell.

The hoax had deceived countless Americans. But in doing so, it showcased the value Americans place on their national treasures.

"It was also kind of reassuring that it got the attention of the media to say, 'There's a concern here that the Park Service has to bring in resources from the outside to keep the Liberty Bell in good shape,'" Forbes said.

Here are some other notable April Fool's Day pranks that played out in Philadelphia:

'END OF THE WORLD HOAX'

On March 31, 1940, a Philadelphia radio station broadcast a message stating that Franklin Institute astronomers had confirmed that the world would end at 3 p.m. the next day. KYW's broadcast alerted listeners that "This is no April Fool joke."

The Franklin Institute's press agent, William Castellini, had put together the announcement after hearing a radio program discussing how the world might end. Figuring it would generate some publicity for the Institute's planetarium, he sent it to KYW, which in turn broadcast the message believing it to be true.

Looking for a clever way to highlight a serious issue, Mayor Michael Nutter rolled out a distracted pedestrian lane on portions of John F. Kennedy Boulevard on April 1, 2012.

Nutter combined the lanes with signage and sidewalk graphics, which showed a pedestrian staring down at a mobile phone.

Nutter also released a fake video of him being cut-off mid-interview by an oblivious passerby, played by a former staffer with knowledge of the prank.

But the lanes – which resembled bicycle lanes – were simply an April Fool's joke aimed at highlighting the danger of being an inattentive pedestrian. They remained throughout the week.

The Philadelphia Parking Authority – reviled by virtually the entire city – poked fun at its overbearing reputation two years ago.

Meter attendants distributed a series of fake parking tickets on vehicles that were not in any violation.

But when drivers removed the tickets from their windshield, they realized they had been victimized. The tickets were not filled out, except for the violation and fine sections. They simply read "April Fools!" and "$0."