Two more pitchers victims of latest round of Phillies cuts 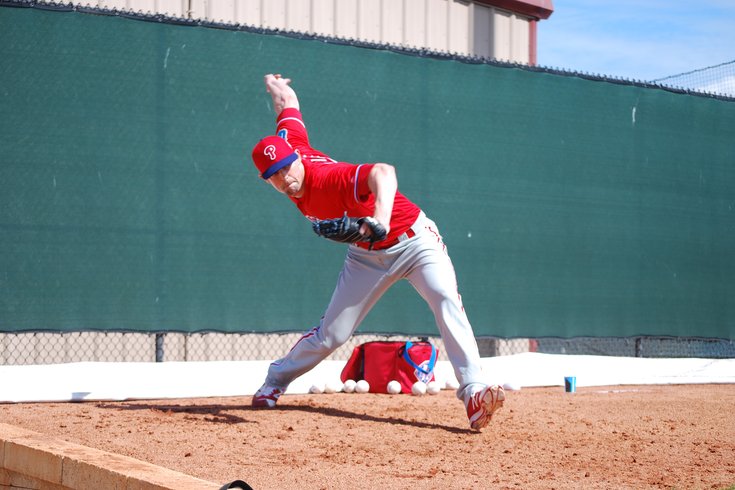 Gloucester Catholic grad Greg Burke was among the latest round of roster cuts on Saturday.

CLEARWATER, Fla. – With just three weeks left until the Phillies play in their final exhibition game of 2016, roster cuts will become more regular. On Saturday morning, two of the 22 healthy pitchers who were competing for bullpen jobs packed their bags at Bright House Field.

Burke and Infante were the fourth and fifth pitches from a crowded camp sent out in the last three days, joining pitching prospects Jake Thompson, Mark Appel, and Zach Eflin.

Burke, one of two pitchers from South Jersey competing for a job this spring, had allowed two runs in each of his last two games. He said he had been struggling with commanding his slider.

The Phillies, meanwhile, will host the Toronto Blue Jays this afternoon in Clearwater with Vince Velasquez and R.A. Dickey set to pitch.

Across the Carpenter Complex, Jerad Eickhoff, sidelined all spring with a small fracture in his right thumb, will pitch in a minor league game. And Jimmy Cordero is set to face hitters in a live batting practice session for the second time in four days.

Jeremy Hellickson, scratched from his scheduled start on Wednesday with flu-like symptoms, will pitch in a minor league game in Clearwater on Sunday, when the Phillies travel to Tampa to take on the New York Yankees. CC Sabathia, Dellin Betances, Andrew Miller, Aroldis Chapman, and Michael Pineda are all scheduled to pitch for New York.

Godspeed, Phils hitters. And good luck to Phillies pitchers today: reigning AL MVP Josh Donaldson is in the Jays lineup today, along with Jose Bautista and Troy Tulowitzki, too.

#Phillies lineup for today's game vs Toronto at 1:05pm. Velasquez vs Dickey.