Altherr or not, it's defense first for Phillies outfield 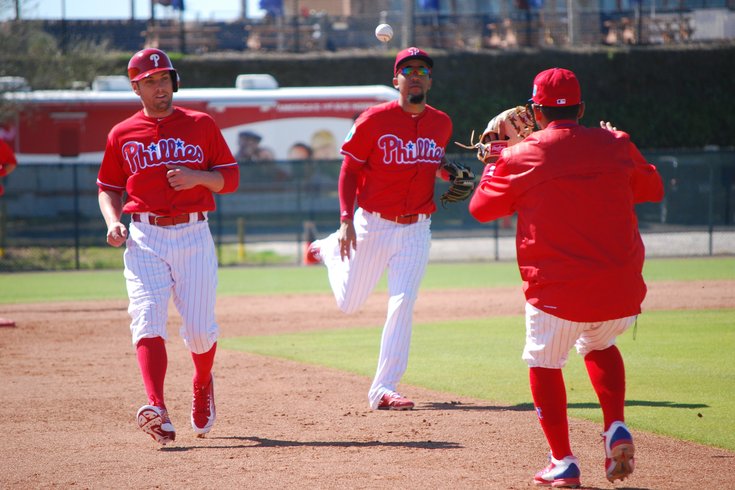 The arrival of Peter Bourjos, seen here in a rundown drill with J.P. Crawford and Andres Blanco, should make young Phillies pitchers more confident with a trustworthy defense behind them.

LAKE BUENA VISTA, Fla. – With Aaron Altherr unlikely to be patrolling the outfield until September or so, the Phillies have a clear vacancy in an outfield already shallow in depth.

Cody Asche hasn’t played in a game yet this spring with an oblique (rib cage) injury and was recently shut down from a hitting program, so his availability for Opening Day is also in question. The only returning outfielder with an obvious path to the lineup is former Rule 5 pick, Odubel Herrera.

So what is a team to do? As general manager Matt Klentak said shortly after announcing that Altherr would be lost for 4-6 months, the Phillies will look to the players in camp to grab hold of an opportunity.

"To me, any defense is huge. Any good defense will make your pitching, better. And the quicker guys work and the more strikes they throw, quality strikes, it makes your defense better. If you have guys throwing strikes, getting contact, working fairly quickly – but you can’t catch the ball – you’re screwed.”

And as his manager said a day later, the Phillies will not look to experiment in moving offense-first, defense-second players into new positions.

So if you’re thinking injuries to Altherr and Asche could be the path toward seeing Darin Ruf in the lineup more, or might present an eventual opportunity for rising Double-A slugger Brock Stassi, also a first baseman by trade, think again.

“The thing we all wanted to see out in the outfield was better coverage (this year),” Mackanin said earlier this week in the wake of the Altherr news. “Speed. Legitimate outfielders. To experiment with a guy who is not a legitimate outfielder is something I'd rather not do.”

All you had to do was watch how the front office operated this offseason.

Domonic Brown, a still-just-28-year-old former prospect, but not one ever known for his defense, was removed from the 40-man roster. Peter Bourjos, a defensive wiz who once made Mike Trout change positions, was claimed off waivers. Tyler Goeddel, a quick-footed athlete who brings to mind a younger Hunter Pence with a less awkward glove, was selected with the first pick in the Rule 5 draft.

And all you had to do is listen to how they spoke more than a month before arriving to Clearwater.

Bourjos was brought in for a reason and was the name you heard a lot more often from Klentak and Mackanin, than, say, Asche, when they talked about the roster during the January banquet circuit throughout the Delaware Valley. They were also high on Altherr, not because of the small sample size of six weeks he had in the big leagues, but because his glove was also a strong suit, one that they believed gave them three guys that could play centerfield – Herrera, Bourjos, Altherr – in one starting outfield.

Of course, any major league team with visions of victories would like to put their best defense possible on the field. Just look at a couple smaller market teams that have gone from decades as pretenders to legitimate contenders (and champions) in the last half decade: Pittsburgh and Kansas City.

But all you had to do was sit down next to Phillies pitching coach Bob McClure in the dugout at Champion Stadium at Walt Disney World’s ESPN Wide World of Sports (longest ballpark name ever?) and talk about the importance of defense, especially when you have a pitching staff populated by young guys still trying to find their way as regulars in the big leagues.

“It’s huge,” McClure said. “Getting to balls that are outs instead of doubles. To me, any defense is huge. Any good defense will make your pitching, better. And the quicker guys work and the more strikes they throw, quality strikes, it makes your defense better. If you have guys throwing strikes, getting contact, working fairly quickly – but you can’t catch the ball – you’re screwed.”

The Phillies are obviously going to monitor the workload of their young pitchers, whether it’s Aaron Nola, Jerad Eickhoff and Vince Velasquez at the start of the year or Jake Thompson, Mark Appel or Zach Eflin later in the summer. But they’ll also be preaching for all of these same pitchers to pitch to contact, without fear, to record quick outs that’ll allow them to pitch deeper into games with fewer pitches.

In order to do that, you have to have just as much trust in the defense behind you as you do in the pitches you’re delivering to home plate.

“I think it adds to the stress of the outings, the innings,” McClure, who spent 19 years pitching in the major leagues, said of having a shaky defense behind you. “They start piling up on you and you’re physically and mentally shot. You get guys on (base) that shouldn’t be on.”

In the last three seasons, the Phillies surely know that feeling.

During that span, the Phillies defense has been the worst in baseball according to the defensive runs saved metric. And during that span, only the Seattle Mariners had a less effective group patrolling its outfield.

And so if you’re the Phillies, and you’re waiting for some of your prospects to grow in the minor leagues, like Nick Williams and Roman Quinn, you might as well emphasize defense over offense for the time being to help your young pitchers develop better in the major leagues.

“I kind of have a philosophy … for me, a lot of times it’s more than pitch count, it’s a stress level,” McClure said. “Because you have to amp it up to get out of a jam. And you’re starting the inning over and getting back to what you’re trying to do and next thing you know you’ve got first and third with one out, and you’re having to re-amp again. So anytime you have really good defense – not many teams will bash their way into championships.”

The end result this season won’t be a championship, but should be a better, more sound product of baseball over the course of the next six months. The improved defense was on display early in Friday’s game, when Bourjos, starting in center, ranged about 80 feet to his right to snag a sinking fly ball in an effort to help David Buchanan limit the damage in a worrisome first inning.

“We might not score as much, but we should be in a lot more games with a chance to win them,” McClure said.