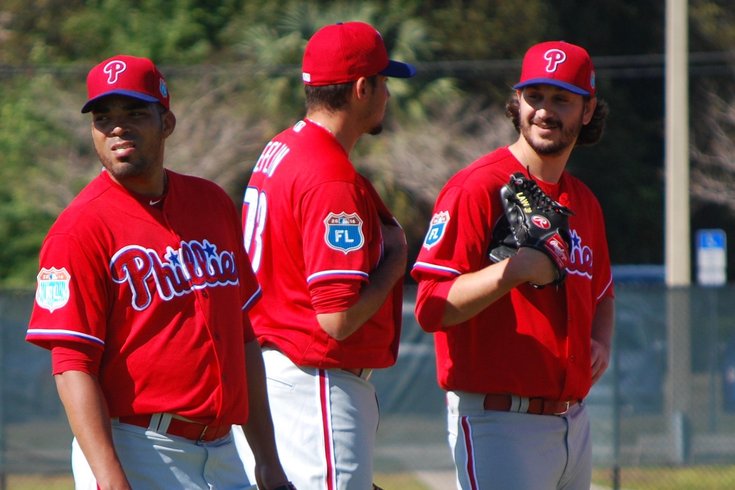 The Phillies bullpen competition is about as crowded as it gets.

LAKE BUENA VISTA, Fla. – If you remove guys like Brett Oberholtzer, Adam Morgan, Severino Gonzalez and Alec Asher, starting pitchers who could also become bullpen options if management chooses to go that route at the end of the month, the Phillies have 22 pitchers in camp competing for bullpen jobs this spring.

That’s correct – 22 pitchers for what’s likely to be seven spots. And beyond David Hernandez, signed to a $3.9 million free agent contract this winter, there isn’t a pitcher you could handicap as a lock for one of those spots.

(And even Hernandez’s hold on a spot is tenuous since he hasn’t pitched since the Grapefruit League opener on March 1 while battling elbow tendinitis, although manager Pete Mackanin said Friday that the veteran reliever was “improving.”)

The Phillies will have to have some semblance of a bullpen in three weeks, when they gear up for the start of the regular season with two games at Citizens Bank Park. The competition for those spots is beginning to heat up in Florida.

Sidewinding left-hander Bobby LaFromboise threw two scoreless innings in the Phillies 9-2 win over the Atlanta Braves on Friday. LaFromboise, in camp as a non-roster player, struck out three of the seven batters he faced and walked one.

“It was nice to see LaFromboise, (Elvis) Araujo, and (James) Russell – it was good to see these guys,” Mackanin said. “I liked that funk (from LaFromboise) that he does.”

LaFromboise, who had a 1.13 ERA in 11 games with the Pittsburgh Pirates last season but spent the majority of the season in the minor leagues, hasn’t allowed a run in four games (six innings) this spring and has racked up six strikeouts while walking two.

One reason for his success: a tweak from pitching coach Bob McClure in the first week of camp.

“He moved me over to the third base side (of the rubber) and that’s kind of helped me with my fastball command,” LaFromboise said. “That’s a big part of it. … I went over (to that side), tried it, and liked it.”

LaFromboise said he used to pitch from that side in college, then the Seattle Mariners moved him … which was also before he threw from a sidearm angle.

LaFromboise will have the next three weeks to continue to make an impression, joining fellow lefties Russell (two scoreless outings this spring), Araujo (three out of four scoreless appearances) and Rule 5 pick Daniel Stumpf (one earned run, eight strikeouts and no walks in five innings) as candidates for a spot or two in the ‘pen. Morgan and Oberholtzer, also lefties, could also be options – Oberholtzer is out of options and would have to clear waivers if he does not win the fifth starter job.

Can the Phillies carry two lefties in their pen next month? More?

“It depends how we feel with all of them,” Mackanin said. “There’s nothing wrong with having three of them in the bullpen, but it depends on everyone else. Everybody was told this is a spring training full of competition, unlike any spring training we’ve had here before. … Everyone seems to be battling and it’s bringing the best out in the guys.”

Perhaps it was the blond hair and boyish face, or the similar stature, or the style on the mound, but David Buchanan was often compared to Kyle Kendrick when he broke into the big leagues two years ago and shadowed the former Phillies veteran.

On Friday, Buchanan mirrored Kendrick again - and not in a good way.

Buchanan would end up allowing two runs on four hits while walking two and striking out one in two innings.

“The four hits I gave up were ground balls that got threw, they weren’t hard,” said Buchanan, a long shot to jump into an already-crowded fifth starter race this spring. “But I was a little erratic today.”

Kendrick, meanwhile, gave up seven runs on nine hits and two walks in 1 2/3 innings. The 31-year-old Kendrick, who pitched with the Phillies from 2007 to 2014, is in camp with the Braves as a non-roster player on a minor league contract.

Ryan Howard made his first appearance in a lineup in a week, starting as the Phillies designated hitter on Friday.

Howard greeted former, long-time teammate Kendrick with a two-run double in his first at-bat in seven days. Howard was sidelined last weekend with the flu-like symptoms that have infiltrated the clubhouse in the last two weeks and was excused from camp on Thursday to meet with MLB investigators concerning the Al Jazeera report.

Howard finished the game 1-for-4 with a walk, a strikeout and two RBI. He ripped a line drive to right field for an out in his second at-bat.

“I told him, ‘You should not take batting practice the whole year,’” Mackanin joked of Howard’s production following a long layoff. “That’s as good as he’s looked in a while. So I’m really happy about that.”

Mackanin said Howard will likely be back in the lineup and at first base on Saturday in Clearwater against the Toronto Blue Jays.