Tyrone Johnson: Don't do Jalen Hurts a disservice by building in excuses 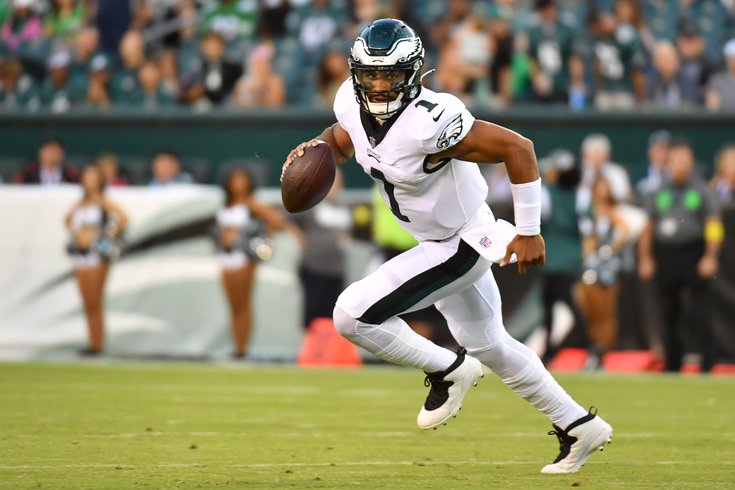 As the Eagles' season fast approaches, everyone in the city thinks the Eagles have a great shot of winning the NFC East. The city remains split on Jalen Hurts though and that is both understandable and fair. If you remove the haters who are always miserable, you have a sector of fans in "wait and see" mode. That is also understandable. What isn’t fair though is the well-meaning people who are treating Hurts like a child instead of an NFL quarterback entering his third year in the NFL after playing at two of the best college football programs in the country.

These people want to give Hurts outs for numerous reasons that I will address in future weeks. What they don’t recognize is that by building in excuses for him before a season starts, they are doing him a great disservice. They are unintentionally saying that Hurts can’t stand up on his own two feet and be judged with the other QBs in the league. Hurts is coming off a season in which the Eagles went 9-8 and made the playoffs. They have gotten better on both sides of the ball. It is not only natural to expect Hurts to make a big step but insulting to him to not demand it.

The fairest way to judge Hurts is not on a curve, but rather by wins and losses and against his 2020 draft class contemporaries. Those are players who have been in the league the same amount time and will be compared to one another when it comes times to get contract extensions. We went through this with McNabb when his contemporaries were Tim Couch, Akili Smith and Daunte Culpepper. McNabb ended up being better than all of them when you combine both stats and winning. The Eagles won nine games last year, the same number as Justin Herbert and the Chargers and one less in the regular season than Joe Burrow. Hurts holds his own there.

In the playoffs Hurts completed just 53.5 percent of his passes and threw two interceptions as the Eagles fell behind 31-0 to the Bucs before garbage time made the game closer on paper. They weren’t competitive for a single moment in that game, and that includes Hurts. Herbert didn’t make the playoffs. Burrow led his team to the Super Bowl before falling to the Rams. He completed 68.3 percent of his passes during that SB run. In LA, there are not people building in excuses for Herbert ahead of time. In fact, they expect him to take another big step in his development and to win playoff games this year. In Cincinnati, they believe that the Bengals will win a Super Bowl at some point with Burrow. Hurts should be thought of in the same way and if he fails, he fails.

I don’t think the Eagles are ready to win the Super Bowl this year even though they should win the NFC East. There are a lot of new parts, we don’t know if Johnathan Gannon is a good defensive coordinator, and Nick Sirianni is only in Year 2 as a head coach. This isn’t all on Jalen Hurts. At the same time, it is important this season the Eagles win some games because of Hurts’ arm and not despite it. He can’t just blend in with the new roster and he can’t just go out there and “run the offense."

In today’s NFL, unlike past years, system QBs don’t win big. The betting favorite to win the whole thing are the Buffalo Bills. Josh Allen isn’t a system QB. We know all about Tom Brady and the Buccaneers having the second-best odds. Neither is Patrick Mahomes who leads a Chiefs team with the third-best SB odds. The defending champion Rams have the fourth-best odds and Stafford is set to tie the record for fastest quarterback to 50,000 yards in NFL history. The Packers have the fifth-best odds and Aaron Rodgers is an all-time thrower. The truth of the matter is Hurts must get to the elite level at some point for the Eagles to win another Super Bowl. We should make that clear and plain, not just because it is the reality, but also because he deserves to be treated and eventually thought of as highly as any QB in this league if he succeeds.

No training wheels, no moderation. I think we should all expect that Jalen Hurts takes a big step this year, and we should expect that Hurts stands up to the challenge.