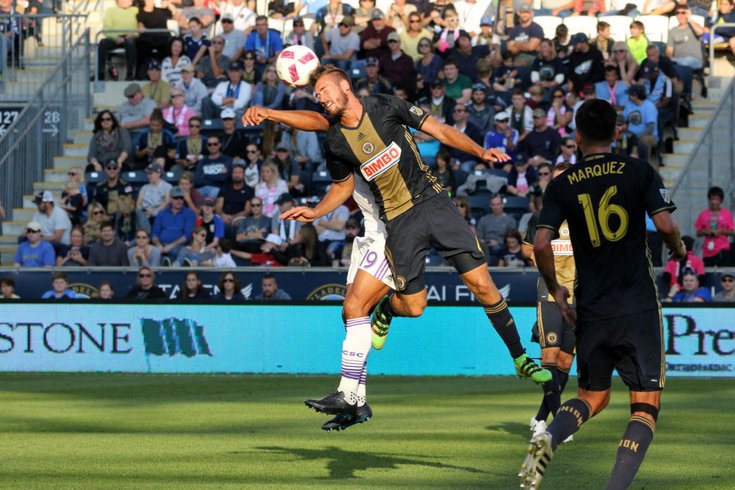 Ken Tribbett was one of the few Union players with a respectable performance in Sunday's 2-0 home loss to Orlando.

Sometime around 2014, I got the sense that fans of the Phillies, Eagles, Flyers, and Sixers were starting to develop a soft spot for the Philadelphia Union.

Just like the Eagles in an NFC championship game, the Union are capable of losing at home while heavily favored.

Just like the Phillies, the Union had an executive masquerading as a general manager.

Just like the Flyers, the Union are capable of convincing us that a stubborn style of play is good enough to win in the modern era.

And just like the Sixers, the Union are capable of losing a lot of games, whether they're trying to or not.

And Sunday's 2-0 loss to Orlando is the the type of game that gets coaches fired.

I don't know if Jim Curtin deserves that, because the truth is that this team really has overachieved in 2016, despite what we've seen in September and October. They came out and performed above expectations with a rag-tag combination of rookies, veterans, and reclamation projects. The club captain suffered a long-term setback in the winter and the best player on the team left in the middle of the season.

So, the results after 33 games are not surprising.

At the beginning of the year, we saw the Union as a team that might be able to reach 5th or 6th place in the east, and it appears that's exactly where they will finish.

Dennis Green wasn't talking about the Union, but his words ring applicable and true:

It's now been two months since C.J. Sapong last scored a goal.

In the nine games since, he also has zero assists, 11 shots, and four shots on goal. 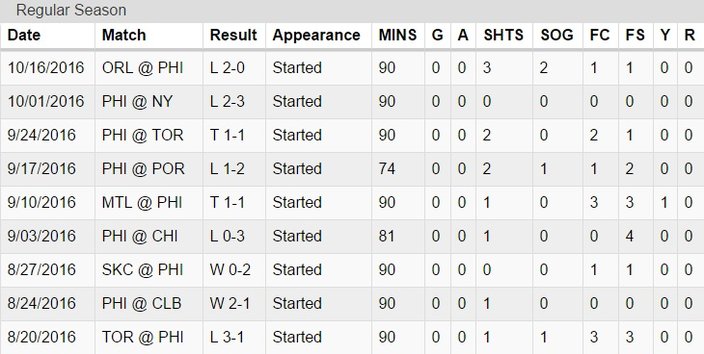 Sapong started the season in great form and fitness, and it really looked like he was going to have a career year. Never before had he scored double-digit goals in MLS, and he reached seven with ten games left to play. It looked like Sapong would easily eclipse that mark and set a new personal best with 10, 11, or even 12 goals this season.

Instead, he might finish in one of the worst slumps in franchise history.

For comparison, here's how Sapong stacks up against some of the other strikers in the eastern conference:

The numbers speak for themselves. Patrick Mullins has done more in 1,048 minutes for D.C. United than Sapong has done in 2,521 minutes for the Union. The star power of Villa and Giovinco is what it is, and Bradley Wright-Phillips is a proper forward on a better team.

Obviously, Sapong can't be blamed for everything. He's a target forward and he's often stuck on an island at the top of the 4-2-3-1. This team really is built to score goals from the midfield, and you've seen that from the likes of Chris Pontius and Roland Alberg. Sapong needs service to score, because he isn't a guy who can turn, run at a defender, and create his own shot.

If you look at the teams atop the east, they all have one thing in common, and that's a star striker in the starting lineup. Sapong is a nice player, and he's done some great things in Philadelphia, but he just isn't the guy to take this team to the next level.

Orlando came out playing an experimental 4-2-2-2 on Sunday, which you might remember as the “empty bucket” shape that Peter Nowak had success with in the early part of the 2011 season.

On paper, Cyle Larin was paired up top with Carlos Rivas, with Kaka on the left and Matias Perez-Garcia on the right.

About 20 minutes in, the shape started to sag a bit, and Kaka got bored on the left flank and started moving inside. 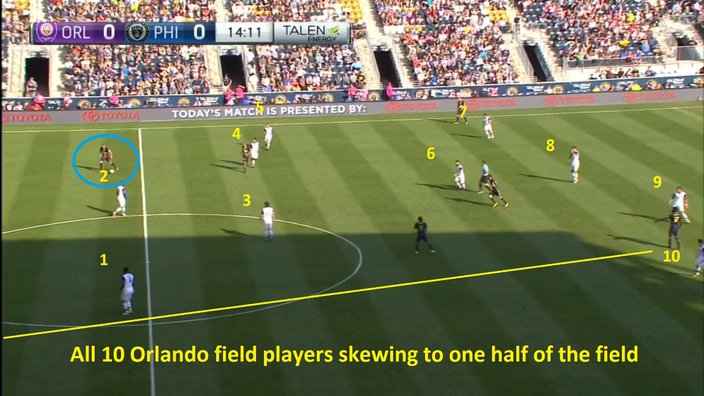 If you were at the game, you may have noticed Larin speaking with the Orlando bench, gesturing towards the line and asking for instructions. That's the result of Kaka moving inside and displacing Larin, who wisely saw the space on the left and went over to the cover, even though he wasn't really interested in playing out there.

The Union didn't take advantage of those early gaps in the Orlando shape, squatting on the ball instead of trying to hit that switch to Keegan Rosenberry, who had acres of space on the right.

This scenario was particularly infuriating, with Alejandro Bedoya lingering in possession instead of trying the diagonal, which would have sprung an attack up the flank.

Curtin spoke midweek about Bedoya's rib injury, and the pain he felt when trying longer passes, so maybe that had something to do with this. Vince Nogueira would have hit that diagonal in about two seconds and tried to get Rosenberry more involved. These are two different players with two different skill-sets, so maybe it's not fair to bring up Nogueira here, but they really could have used a field-switching ball and some urgency from Bedoya or Carroll in this game.

It had been 29 days since Sapong's last shot on goal, and he managed to put two on target in this game, so at least that's something positive to look at. He also received zero calls from Ricardo Salazar despite being on the receiving end of multiple, clear-cut fouls.

He probably had the best chance of the game, but did this from eight yards out:

If Ilsinho is healthy, he needs to start on the right side. I know Herbers has been pretty good in the last five or six games, but Ilsinho is the better player overall. Maybe you could even get both on the field at the same time.

He hasn't seemed like himself in the last couple of games.

In this one, he took two shots from outside the box, then missed on a free header from right around the six yard box, which really isn't his type of play anyway. Barnetta hit a couple of decent dead balls, but there was one short corner that didn't even make it into the box. The next corner was curled out of play for a goal kick.

They need him to do what he was doing earlier in the season, which is demanding the ball, running at opponents, and drawing fouls.

He had the close-range header that Joe Bendik did well to keep out, and that was his only shot of the game. Again, just not enough touches for Pontius, who is the team's leading scorer. He came off in the second half and motioned to his hamstring while speaking with members of the training staff.

Two horrendous turnovers in the first half, then a poor touch in the second that almost turned into a third counter for Orlando.

He looked slow, indecisive, and completely out of sorts, which makes me wonder if the injury was worse than we originally thought. Defensively, he did log a couple of interceptions and win a few tackles, two I think which came off his own turnovers. You just need more from your record signing in these types of games.

Either way, credit to Bedoya for addressing his performance on Twitter.

Mostly quiet and effective, he's not the reason they lost the game.

Defensively, he did pretty well against the tricky combination of Matias Perez-Garcia and Rafael Ramos. The Union also turned two of his crosses into scoring chances, though they were admittedly low-percentage efforts. Fabinho still gets too much loft and backspin on his service.

The ghastly error is what it is. Even with the miscommunication between him and Rosenberry, that ball should have been safely knocked back to Andre Blake.

I thought he played a nice game, highlighted by a big block in front of goal that probably kept the game scoreless. He took a bad yellow card in the first half, but did good job of keeping Cyle Larin quiet.

Marquez obviously deserves blame for the second goal, with a header that gets deflected right into the path of Julio Baptista. I can't put too much stock into conceding a 95th minute goal on that type of play when your front six has basically rolled over and died.

On a horrendous day for everybody else, Ken Tribbett had a pretty good performance. He went 3/4 in tackle attempts, added one block, four clearances inside the box, and nine interceptions. Maybe we're looking at his performance differently if that carom off his foot goes into his own net instead of coming off the post. And the early slip did allow Rivas a chance inside the box.

Otherwise, he pretty much handled everything that came his way.

On the game-winning goal, I think he's probably right in motioning for Fabinho to play the ball. In those cases, it's probably just easier for Fabinho to knock it backwards, instead of Rosenberry leaving his deeper position to try to take the ball diagonally into space. Rosenberry is the emergency guy, and he's sitting in the deepest position.

There were some ups and downs in this game for Rosenberry. He had a couple of key passes and a nice tackle on Kaka in the second half. It feels like the long haul of the season is wearing on him a bit, because he hasn't seemed as sharp as he was back in the spring and summer.

Enjoy it while it lasts. Blake's value will not get any higher, and I think he gets sold this winter.

A spark off the bench when the Union offense was mired in quicksand. If he's healthy, he needs to start next week.

One dangerous shot attempt for Alberg, which didn't come until the 97th minute with the game completely out of reach.

The no-calls on Sapong were predictable. Otherwise, it was a relatively smooth game for Salazar.