Union scrape, claw, and slop their way to a crucial road point in Kansas City 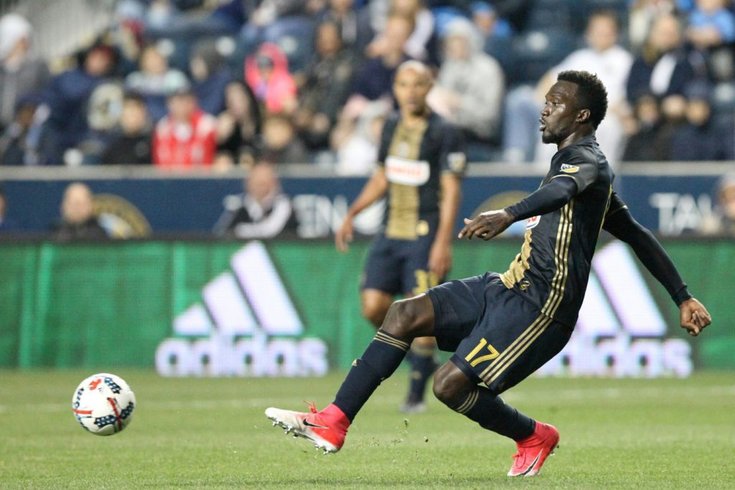 This was a good draw for the Philadelphia Union, a road point stolen from a better team, playing without your midfield captain and your All-Star, international-quality goalkeeper.

It wasn't a classic "smash and grab" of three road points, but it was an incredibly positive result against a team that hasn't lost at home since May 27th of last year.

“Listen, Kansas City came at us in the first half," head coach Jim Curtin told media after Thursday night's game. "They were the better team, for sure, the whole night. But our guys, they stuck with it. They fought hard. There’s no coincidence that (Kansas City) is unbeaten in 19 games now (at home). As crazy as it sounds, at the end we had a couple chances to maybe steal all three with some of the breaks that we had with them pushing numbers forward. But overall, on a night when we didn’t play some of our best soccer, we rolled up our sleeves and did fight and got a point.”

The final statistics were incredibly lopsided, with Sporting controlling possession by a 64 to 36 percent margin while winning 16 of 18 five-minute ball control intervals. The Union only completed 64 percent of their passes while earning just three corner kicks and three fouls in the attacking half of the field.

It was a ten to one margin in the first half alone, with Philadelphia scrambling to block five of those efforts. Two were off target and three were saved by John McCarthy, who played one of the best games of his career as a stand-in for starter Andre Blake.

"It was a tough game in the first half," McCarthy said. "I don’t think anyone played their best. It wasn’t our best team game by any means, so we knew we had to come out and take advantage of the second half because we got through a lucky first half at 0-0. It was a fresh start coming into the second half and we did a lot better."

Sporting finally broke through in the 49th minute, when Diego Rubio was able to settle on the corner of the penalty area and find a seam between Jack Elliott and Oguchi Onyewu, firing a rocket past McCarthy to the far post.

There's the breakthrough! Diego Rubio opens the scoring for #SportingKC and the home team goes up 1-0. #SKCvPHI https://t.co/oSnqtN1Gj9

It looked like that might be it for the Union, but they were energized by the goal and scraped the equalizer 20 minutes later when C.J. Sapong was brought down inside the box by Benny Feilhaber.

But instead of Sapong taking the spot kick that would have put him at double-digit goals for the first time in his career, it was instead converted by substitute Roland Alberg, who had come on just eight minutes prior.

"I think it's just a feeling," Alberg said of the penalty-taking decision. "I felt great. I think C.J. also (did) and I told him after I received the ball, I told him, 'I need this one bro,' because you know, (I've had) some difficult times on the bench and as a sub and it's hard for me. And the way he reacted was, 'okay, okay'. That's the way we talked about it and it was a big point for us. And we have to stick together and in two weeks win another game."

Roland Alberg sends Melia the wrong way and scores the ensuing penalty to equalize for the Union! Game on. 1-1. #DOOP #SportingKC #SKCvPHI pic.twitter.com/jndnsG1imN

The draw moves the Union to 23 points in the Eastern Conference, five back from the final wild card playoff spot.

They'll pause for the Gold Cup break, playing English Premier League side Swansea City in a Saturday friendly before continuing league play with six-point road trips to Montreal and Columbus.

"Personally, I’m very proud of my teammates," said Sapong of the result. "(It was) a game where I felt like I didn’t provide my team with things that I usually do. Even when we were getting battered, we stayed true, we stayed with each other and got out of the first half even. When we went down a goal we picked it up even more. I think it’s a good sign for us and a standard that we’ve now set. So moving forward, I’m very excited about what we can accomplish in this League. Even missing some guys, we’ve had a tough stretch of games in the last couple weeks to the last month. Traveling here and playing in a stadium like this against arguably the best team in the league right now, it speaks volumes to what we’re made of. So like I said, I think the bar has been set and if we could emulate that moving forward I think we’ll be serious contenders."