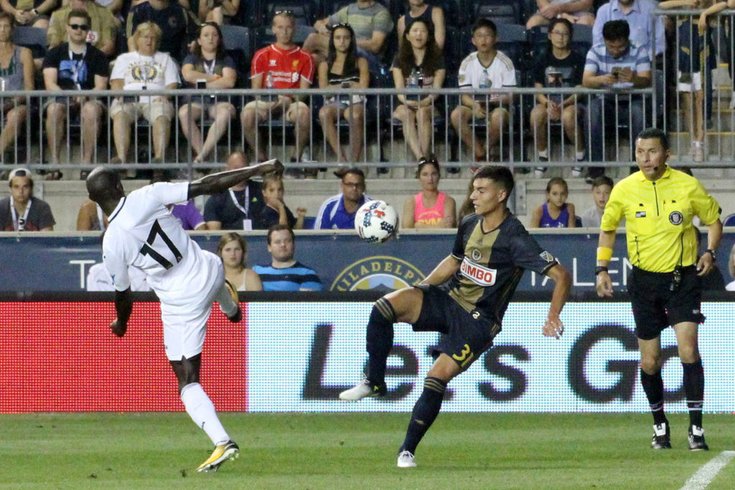 Homegrown signing Anthony Fontana made his Union debut in the 2-2 friendly draw against Swansea City.

The latter describes what might be possible with an eye toward the future.

Wednesday's transfer window closed without a single addition or departure from the team, but the technical staff did sniff around for a midfield upgrade, bringing in Costa Rica international Elias Aguilar and Argentinian journeyman Nicolas Martinez for separate training stints.

In the end, neither was determined to be the right piece to move the team forward.

"We've been searching for some fits that might be good for us, but once you do something like that, it has to be good," Sporting Director Earnie Stewart told reporters Wednesday. "Up to now, the business that we've been able to do wasn't sufficient enough to say that it would be a lot better than what we have, so we refrained from that."

That might sound annoying to Union fans, especially with the spate of activity from Eastern Conference competitors like D.C., Columbus, and New England. Philadelphia seemingly stood pat while other teams got better.

Earnie Stewart confirms that the Union had Nicolás Martínez in for a trial, "but did not feel for us that it was the right fit."

But the truth is that the Union probably made the right decision to hold off for now and instead kick the can down the road.

The most important thing is that the possibility of clearing cap space will give the team much more flexibility in the winter window.

With Maurice Edu, Charlie Davies, Brian Carroll, Chris Pontius, Alberg, and Ilsinho almost guaranteed to come off the books, you're looking at seven figures to upgrade the number ten position. Combine that with the fact that Fontana's pre-contract becomes official on January first, and you're restructuring the depth chart in a way that makes much more financial sense.

That's the whole point of the story-opening comparison.

We know that Philadelphia is committed to the academy moving forward, and those young players also happen to be affordable. If they're good enough to play, put them on the first team squad, get rid of those chunky $400,000 salaries, and explore DP-status for starters in three positions.

The high/low structuring of those three positions puts homegrown players in a spot to see the field while also freeing up money to make significant upgrades in the starting eleven. The only middle of the road contracts remaining would be Haris Medunjanin, C.J. Sapong, and Jay Simpson, with two of those three players earning every single dollar of their salary and the third presenting a bit of a problem moving forward.

It just makes more sense to steer money towards seven-figure first team upgrades while trusting your academy kids to be the depth you believe in.

The other thing to consider is that there's no guarantee that a mid-season foreign signing will make an impact in the final 10 to 12 games. And let's be honest, it's not like this Union team is making a deep run if they do manage to qualify for the playoffs.

More common are the tales of Marco Di Vaio, Tim Cahill, and Kenny Miller, players who came to MLS in the summer but didn't find their form until the following season.

"You have to make it fair for that person, too," Stewart explained. "Everyone you bring in during the summer, people expect them to (contribute) right away. You have to have that in the back of your head, too, especially if you do a 'bigger' signing, as some would say. They need to be impactful right away. If that's not the case, let's make sure we set ourselves up for one for the rest of this season, where I believe that we're in a position that we can still make things happen with the team that we have and the faith we have in that team and the consistency and structure and set ourselves up for next season."

It was the same story for Tranquillo Barnetta, who played left wing for the Union in 2015 and needed time to adjust to the league.

In 2016, he was an attacking midfielder and probably the best player on the team.

You could probably throw Alejandro Bedoya into that category as well, since he was coming off a full season in Europe with little time to acclimate to Major League Soccer before being thrown into a tight playoff race.

"It's a tough time at the end of the season," said head coach Jim Curtin. "A lot of times you're getting a European player who is coming off the beach, because they had their season kind of wind down or they're just getting ramped up. It doesn't mean that the pedigree and the quality can't click instantly. It can happen, but it's harder. Even when Tranquillo came in, and he was a world-class player, he wasn't quite fit yet. So it took him time to get going. The difference for these athletes now, when you're in mid-season – I'd use Josh Yaro as an example – he's really in week two or three of a regular season, whereas our guys are in week twenty-something. They have twenty-some games under their belt and they're flying. He's catching up. It's the same thing when a transfer comes in and it's usually on the tail-end of finishing up their season. It doesn't mean they can't have success, like Lodeiro, who came in and was excellent. He also had some nice pieces around him, too. That wasn't a garbage team, it was a really good group."

With the lack of activity this summer, the potential for the winter is high, and it starts with purging bad contracts and making the commitment to youth that we so often hear about.

"The judging started a long time ago," said Stewart of pending contract options. "You first let this transfer period go by, because that's a natural thing that happens. It's part of the season. After this window, you start reflecting, the coaching staff and our scouting staff, to make sure we make (the right) choices for the next season."