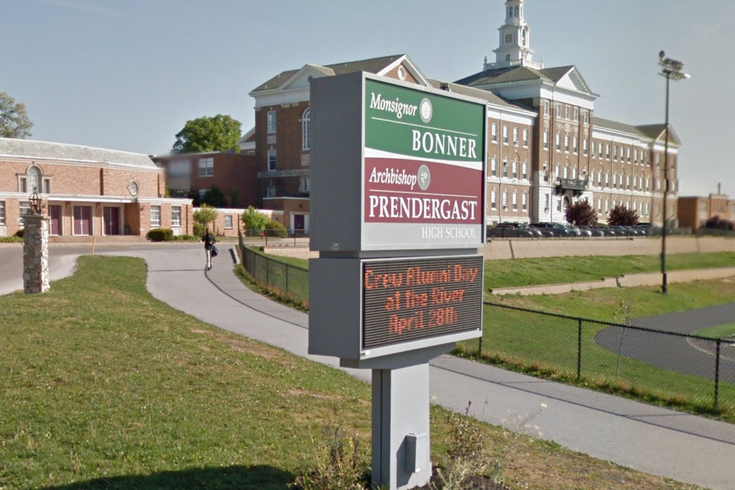 An incident outside Monsignor Bonner-Archbishop Prendergast High School resulted in the school being placed on lockdown Wednesday morning and the recovery of a loaded handgun from a student's locker, police said.

It began shortly after 11 a.m. at the trolley stop at Lansdowne Avenue and Garrett Road, located across the street from the archdiocesan Catholic school's campus in the Drexel Hill section of Upper Darby.

“Then she reported seeing one of the males pull out a gun and threaten to shoot the female in the foot,” Chitwood said.

According to Chitwood, the three students involved are freshmen and sophomores, between the ages 15 of 17, and they returned inside the school after the incident.

The student witness reported what she saw to Bonner Prendie's principal, and the police were called.

“We put the school on lockdown until 1:45 (p.m.),” Chitwood said. “The lockdown worked. We found the gun in a girl’s locker and arrested four students, two for marijuana charges and two for gun violations.”

Chitwood said a fifth student is charged with marijuana possession but was not involved in the trolley station activity. Police allegedly found drugs in his locker during their search.

The township’s top cop called the student who reported seeing an alleged drug exchange and gun threat a hero for reporting what she saw.

“No. 1, she is the hero of the day,” Chitwood said. “She did exactly what you are supposed to do, and, as a result, we found the loaded 9 mm. semi-automatic gun and found marijuana. We are still investigating the incident.”

Kenneth Gavin, director of communications for the Archdiocese of Philadelphia, said parents have been notified of the incident and were asked to speak to their children about reporting suspicious activity.

“Archdiocesan schools take any report of a threat to school safety seriously,” Gavin said in an email response. “Thankfully, no one was harmed. Incidents such as this demonstrate the importance of all members of the school community working together to maintain a safe environment."

He continued: “The Upper Darby police conducted a thorough search of the building. During the course of their work, a weapon was discovered in one of the lockers. Ammunition and marijuana were also found on campus.

Gavin expressed his gratitude to the Upper Darby police for their assistance.

Chitwood said officers brought a K-9 unit to the school during the lockdown to locate the drugs and loaded handgun.

The students, who were not identified, will be charged as juveniles.