Someone stole the Upper Darby police chief's iPhone from the mail

'When it arrived ... it was a nicely packaged box of nothing," Superintendent Michael Chitwood says 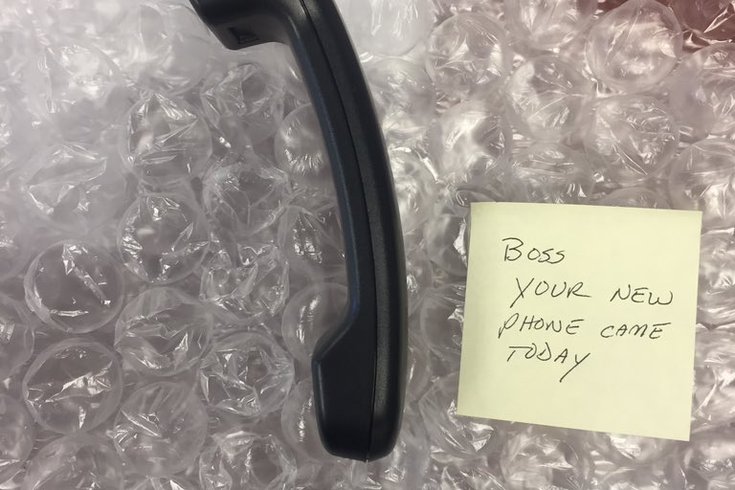 This is what officers left on Superintendent Chitwood's desk after his iPhone 7 delivery box was empty.

Upper Darby Police Superintendent Michael Chitwood got a note on his desk on Tuesday that read: "Boss, your new phone came today."

A few days earlier, Chitwood had an officer order him a new $600 iPhone 7. His was failing (as iPhones are wont to do) and Chitwood himself will tell you he's helpless without his phone. His own number is the only one he knows.

But what sat on his desk was an old receiver straight from the 1990s, not his new smartphone. It was a joke, he thought.

It appears that on its way to Upper Darby Police headquarters via mail courier, a thief swiped Chitwood's iPhone and just left the bubble wrap inside. And after closer inspection, there was evidence the FedEx delivery box from somewhere in Texas had been carefully compromised.

Some jerk left this on the boss' desk @ChiefMChitwood pic.twitter.com/A8GNAlTCJw

The officers realized the packaging label on the delivery box had been sliced open and re-taped, Chitwood said. A sophisticated maneuver.

"When it arrived at police headquarters, it was a nicely packaged box of nothing," he laughed. "I felt it and said, 'Jesus Christ, this is awful light.'"

Social media reactions to the theft has been "off the charts," Chitwood said.

To the individual that stole the boss' @ChiefMChitwood new cell phone while it was in route to the station via courier: 1. That thing goes off at 4am every morning 2. Don't call out the UDPD helicopter you'll only be disappointed and 3. Thanks for the bubble wrap-it made our day

That text I got from his number saying, "You're a crumb bum" makes sense now.

When you find them, please let us know! And I think we should all start randomly calling the number and piss them off!

"You know, some people are taking this very serious," he said. "They're saying, 'It could have been your gun.' But, you know, I never saw the phone, it never got to me. Let people have a good time with it."

Luckily, he's been using an older cellphone from the station while he waits for the replacement-to-the-replacement to be successfully delivered.