Robert Fryer began taking tickets from his employer in 2013, when the U.S. Open was held at the Merion Golf Club 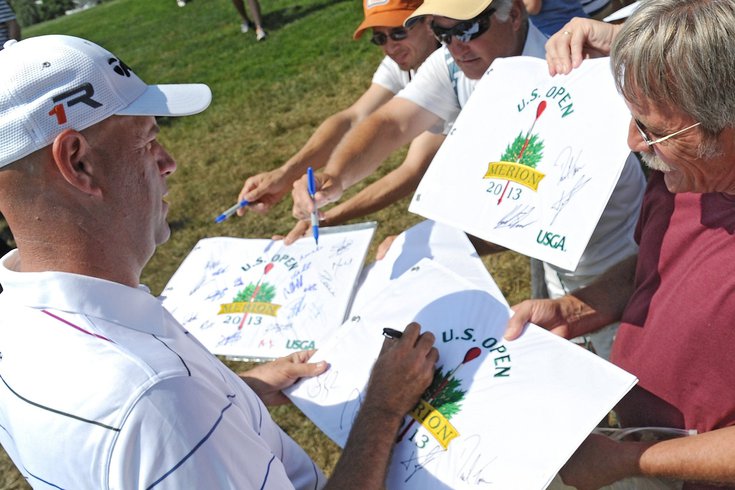 Robert Fryer, 40, was sentenced to more than a year in prison for tickets worth $3.3 million from his former employer, the U.S. Golf Association, between 2013 and 2019. The photo above shows shows professional golfer Stewart Cink signing autographs at the 2013 U.S. Open at Merion Golf Club.

The former U.S. Golf Association employee from Bucks County who pocketed more than $1 million selling tickets to professional golf events beginning with the 2013 U.S. Open at Merion Golf Club in Haverford has been sentenced to more than a year in prison by a federal judge.

Robert Fryer, 40, of Perkasie, stole 23,000 tickets from his former employer between 2013 and 2019 and sold them to two brokers based in the Philadelphia suburbs, who flipped them for a profit. The sum of the face value of the tickets was more than $3 million. Due to a glitch in its ticket tracking system, the USGA was not aware they were disappearing, prosecutors said.

Fryer first orchestrated the scheme nine years ago when the U.S. Open was taking place locally at Merion Golf Club and it continued through the 2019 tournament. Ticket broker Jeremi Michael Conaway received tickets each year during that span. Investigators said he received a total of 15,000 tickets through Fryer and sold them for a profit of more than $2.4 million.

Another broker, James Bell, first bought the stolen tickets from Fryer in 2017. During three years, he received more than 7,000 tickets and sold them for nearly $600,000 total.

On Wednesday, Fryer was sentenced to 14 months in prison to be followed by three years of supervised release, the U.S. Attorney's Office said. He also must pay $3.4 million in restitution and fines. He had pleaded guilty to fraud charges in October 2021.

Conway and Bell also were charged with fraud. Conaway, 46, owner of Eagle Eye Ticketing Management in West Chester, was sentenced to two months in prison. Bell, 70, of Glen Mills, who owns Sherry's Theater Ticket Agency in Philadelphia, was sentenced to six months.

"Fans should remember that any (ticket) with a low price that seems 'too good to be true' should be cause for caution and concern," U.S. Attorney Jennifer Arbittier Williams said.

Note: Portions of this article were rewritten after it was originally published.