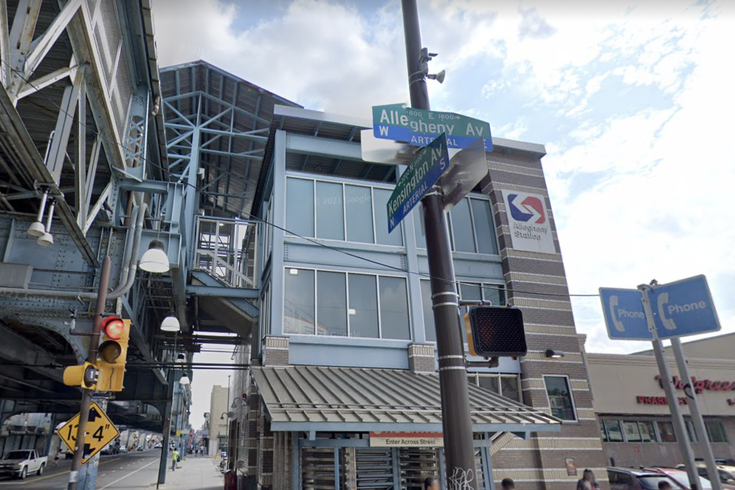 Three pedestrians were struck by an SUV that crashed into SEPTA's Allegheny Station on Tuesday morning. Two of the pedestrians and driver, who was speeding before the crash, were pronounced dead at the scene. Another pedestrian survived.

Two pedestrians and the driver of a speeding SUV were killed overnight Tuesday when the vehicle mounted a curb and crashed into SEPTA's Allegheny Station, police said. Another pedestrian was hospitalized with serious injuries.

The crash happened around 2:45 a.m. along the 1800 block of East Allegheny Avenue.

A Honda Pilot traveling eastbound toward Kensington Avenue failed to navigate a bend and passed diagonally through the intersection before ramming through the station's turnstile. The vehicle then struck the two pedestrians before hitting the station wall.

The pedestrians who died were identified only as a man and a woman on Tuesday morning. The third pedestrian, a 53-year-old man, is in stable but serious condition at Temple University Hospital.

The male SUV driver was pronounced dead at the scene.

Philadelphia Police Chief Inspector Scott Small said Tuesday morning that the male pedestrian killed in the crash was "clearly decapitated" and his body had been partially burned, 6ABC reported.

Philadelphia police have surveillance video of the crash. Investigators did not say how fast the SUV may have been going prior to losing control.

MFL: Train service has resumed to Allegheny Station in both directions. Shuttle buses are canceled. Residual delays are expected while full operations are restored.

Officials from the Department of Licenses & Inspection came to the station after the crash was cleared to inspect the building, which sustained a crack several feet long on the wall that was struck.

A SEPTA spokesperson said the station's stairwell is still being inspected to determine what repairs will be necessary. SEPTA hopes to have the damaged exit back in service as soon as possible. Both elevators are still in service and people can still use both sides of the station.

There have been 18 pedestrian deaths in Philadelphia in 2022. There were 42 last year and 46 in 2020, a period that has seen higher rates of traffic fatalities during the COVID-19 pandemic.