Robert Fryer, who formerly worked in the USGA'S admissions office, allegedly started the scheme with the 2013 tournament at Merion Golf Club in Haverford 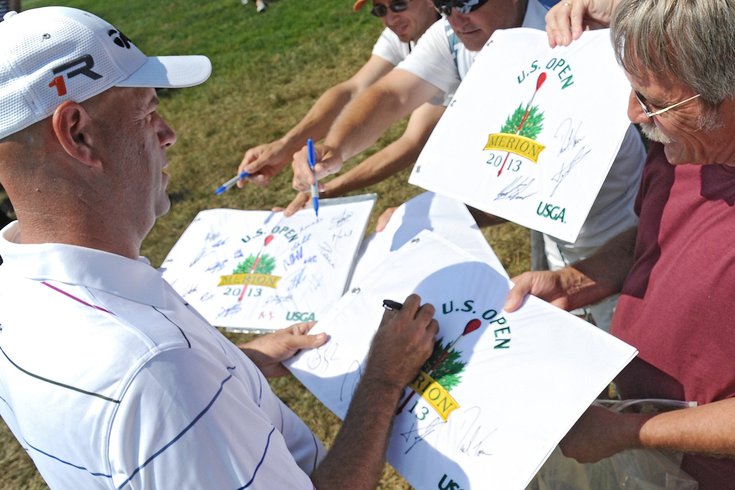 Robert Fryer, a former USGA employee from Bucks County, has been charged with stealing millions of dollars worth of tickets to U.S. Opens and selling them to ticket brokers, beginning with the the 2013 U.S. Open Championship at Merion Golf Club in Haverford, Delaware County. The file photo above shows golfer Stewart Cink signing autographs for fans during that tournament eight years ago.

Robert Fryer, 39, worked in the admissions office at the USGA's headquarters in Far Hills, New Jersey. Federal investigators allege that including the 2013 U.S. Open at Merion – the golf course located in Haverford, Delaware County – Fryer continued the scheme for seven years, until 2019.

During that time, Fryer allegedly stole more than 23,000 tickets, which at face value were worth more than $3 million, and sold them to ticket brokers, authorities said. They were paid in cash and via PayPal transactions.

Brokers acquired thousands of tickets to each year's golf championship by buying tickets from Fryer, sometimes in person and other times through mail, investigators said. The alleged scheme allowed the brokers to circumnavigate the USGA's rule that prevented bulk tickets of more than 20 tickets to any single buyer.

One of the brokers Fryer worked with regularly emailed the Bucks County man prepaid, UPS shipping labels that Fryer allegedly would use to send the tickets to the broker or directly to customers, federal prosecutors said.

"The defendant allegedly stole revenue from a legitimate business that pays taxes, employs many, supports a non-profit organization, and brings excitement and income to our district with U.S. Open events at courses like the Merion Golf Club," acting U. S. Attorney Jeniffer Arbittier Williams said. "Criminals that conduct ticket schemes like this prey on the excitement surrounding big events; fans should remember that any item with a low price that seems 'too good to be true' should be cause for caution and concern."

Fryer is charged with conspiracy to commit mail and wire fraud, four counts of mail fraud and 10 counts of wire fraud. In addition to prison time, if convicted, Fryer could face millions in fines and be required to pay restitution to the USGA for the tickets.