Are you ready for some spring football? The USFL is betting you are 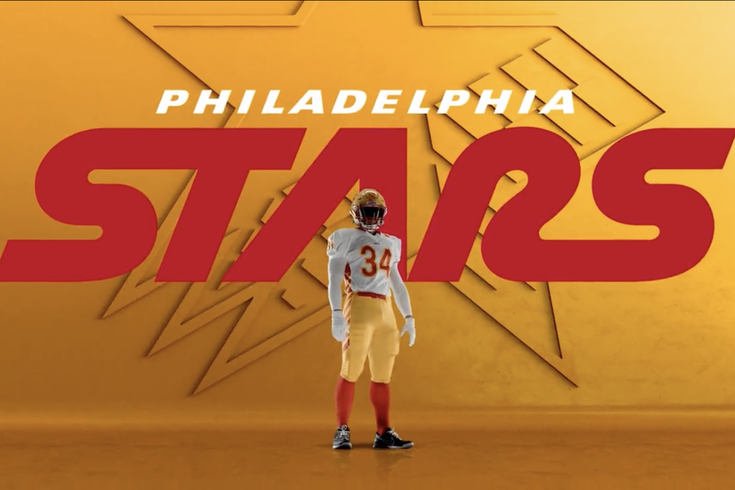 A look at the new uniforms that will be worn by the Philadelphia Stars during the inaugural seasons of the new USFL.

Back in January 2021, Brian Woods was dealing with a few small tornados. His one- and three-year-old were swirling around his home office. Amid the noise, lounging out with his feet up on his desk, with his AirPods plugged in, an idea struck him. Woods, who founded The Spring League, a showcase developmental league and scouting event from 2017 to 2021, happened to catch FOX Sports Chief Executive Officer and Executive Producer Eric Shanks driving.

Woods thought a spring football league would be intriguing—and that the intellectual property of the former USFL could be available. He did some legal research and found many of the USFL trademarks had been abandoned. This captivated Shanks. Daily conversations took place, pieces began taking shape, and in June 2021, FOX announced the new United States Football League would begin play in April 2022.

The original USFL played from 1983 to 1985 and folded when the league decided to compete directly with the NFL during the fall of 1986, at the urging of New Jersey Generals majority owner Donald Trump, in an effort to force a league merger. The USFL filed an antitrust suit against the NFL, which resulted in the NFL violating anti-monopoly laws and USFL winning a $1 judgement. That ended “the old USFL,” which featured the Philadelphia Stars, the team that won the second league title and discovered eventual pro football Hall of Famer the late Sam Mills, a 5-foot-9 linebacker who the NFL previously never gave a chance. Hall of Famer and all-time great Reggie White also got his professional start in the USFL.

Woods has a very staunch hammer behind this venture—a multi-year deal with FOX Sports, coupled with programming on NBC. Woods also has some serious players involved. He’s listed as the USFL’s president of football operations. Former Dallas Cowboys player and veteran Fox NFL analyst Daryl Johnston will be executive VP of football operations; Mike Pereira, a former top NFL official and now Fox Sports’ NFL and college rules analyst, will be the new league’s head of officiating; and Edward Hartman will be EVP of business operations for the USFL, while retaining his current position as SVP of digital partnerships and wagering at Fox Sports.

Though this USFL has no association with that USFL, the eight-team league bares a striking resemblance to the previous league. The North Division will consist of the New Jersey Generals, Michigan Panthers, Pittsburgh Maulers and Philadelphia Stars. The South will include the Birmingham Stallions, New Orleans Breakers, Tampa Bay Bandits and Houston Gamblers. Birmingham, Alabama, is where the league will be based in its inaugural season. All the games will be played at either Protective Stadium or Legion Field.

The USFL plans to kick off its season on Saturday, April 16, when the Stallions play the Generals. What’s unique is the game will be televised by both Fox and NBC, which is the first time two broadcast networks have scheduled to air the same sports event at the same time since both NBC and CBS aired Super Bowl I. In the future, there is a chance the playing venues will be in the representative cities of the league—obviously including Philadelphia.

“We have not taken any option off the table for Season 2 and beyond,” Woods said. “There are a lot of different possibilities where we can land.”

He also stated that the USFL has a database of 3,000 players that they’re going to explore. What will raise some antennas is that college sophomores, depending on their talent level, will be eligible to play.

“All of the heavy lifting has really been accomplished at this point,” Woods said. “We’re positioned very well and have met all of our critical deadlines. We’re ready to go. We have players ready to be drafted Feb. 22 and Feb. 23. Our teams will be reporting to training camp on March 22, and we’re scheduled to kick off on Saturday, April 16.

“The immediate presentation is going to be exceptional, so I have to make sure the on-field product is equally remarkable. That being said, we started scouting players and evaluating talent with former NFL scouts in NFL training camps last fall making the rounds, trying to identify some players. Many of the players in this league are going to be talented. We will have a sprinkling of former NFL Draft picks, so we’ll have some young guys.

“We’ll have in the ballpark of 16 to 20 players that are still a year away from their draft eligibility. There will be some rising juniors, some current college players who will be playing in the USFL this year that will forego their junior year in college to play in the USFL. There will be a handful of those players. They will be talented players. There will also be NFL players off practice squads and guys that are coming off active rosters that were not re-signed this spring that will be participating. We’ll also have players who were in NFL training camps the last two or three years that will make up a good number of players in this league. I would say it’s good talent, which will produce a very, very good product that fans can expect from the USFL.”

Another vital key to the possible success of the USFL is that it has a good relationship with the NFL, according to Woods. The previous incarnation of the USFL did not.

“I will tell you we have a very good relationship with the NFL and with FOX being involved, operating all of the teams, and FOX has a good relationship with the NFL,” Woods stressed. “We have a very strong relationship in that respect. I think the NFL can absolutely benefit from an alternative football league in a lot of ways. Our plan in the USFL is not to be a developmental league. Our plan is to be a dominant stand-alone spring professional football property.

“We feel like we can exist in the spring. We have no intent on taking on the NFL. We feel that there is enough quality talent out there that we can support our league. I’m sure that there will be instances where the NFL actively evaluates players in our league. Our contract structure is set up in such a way that if a player gets done playing in an USFL season, that player has almost six weeks before NFL training camps open. That player is free to pursue an NFL opportunity after they get done playing for their USFL team. We’re certainly going to keep a solid relationship with the NFL.”

Woods said the league will issue standard contracts to every player, each receiving the same base compensation. Woods was not willing to be specific about that, though he did say younger players would be allocated with additional money for the sacrifice they make for leaving school early. The USFL is partnering with Strayer University to offer further educational opportunities with free tuition for any player who comes into the USFL and wants to finish their degree or pursue an advanced degree.

MORE: The return of the USFL to Philadelphia is a no-brainer

What you will see if you tune in to the USFL in April is anyone’s guess.

Woods said he expects the level of play will be equal to major Division I college football.

“There’s no question we’re looking at a D-I quality of football, the quality of the on-field product will be pleasantly surprising to our fans,” he promised. “We’re going to have really good talent to display in this league. I think our scouts have done a really good job in evaluating players and even finding some that have slipped under the radar that have gone unnoticed. We want to try to make them stars in the USFL.

“Hey, Sam Mills was one of my favorites, and if it wasn’t for the USFL, I don’t know if he would have turned into the star he became. He was definitely helped by the USFL. He was not going to check all of the boxes to be an NFL-type linebacker. Sam is a perfect example of what the USFL was and what helped develop the players into becoming that great product that USFL fans got used to seeing. That’s what we’re hoping to create with the new USFL. We want to develop pro players and we want to be somewhat aggressive in our talent procurement process in even affording opportunities to younger players.

“We’re looking for the next Sam Mills—there’s no question.”

But what’s the pitch? Why would someone leave school for the USFL?

“The transfer portal has certainly provided opportunities for us,” Woods said. “There are certainly players that are looking for a home and the USFL offers them an opportunity if the player is interested in turning pro, especially if they’re a quarterback who might enter the transfer portal. Maybe it’s a situation where they’re not starting, had they been in another program, they would be the starter. You can come to the USFL, display your talent and for a young man who’s already removed from college.

“I would say the pitch is simple: ‘The USFL is going to allow you to live out your dream. You’re not chasing your dream in the USFL, you’re living it. We’re a professional football league. We’re paying a good wage to players who can call themselves professional football players.’ In time, we can become even more player-centric. For a player not currently happy with their situation, the USFL offers an opportunity that didn’t exist before. I would go one step further to those players: If I’m not in a Power Five Conference, I’m not getting the TV exposure I would get in the USFL on broadcast television. It’s not a streaming network. It’s not a subsidiary, or one of the other networks not televising a Power Five conference.

“If you want to be seen as a talent, the USFL is the place to show off your skills. It’s hard to put a value on that.”

The vision is simple, too, Woods emphasized. His goal is to create a “dominant, stand-alone professional football league,” he said. “That’s the end game here. We just want to get through our first season. I think that’s a telling sign with other attempts at spring professional football in recent times. They haven’t been able to finish a season.

“So, in retaining an audience, if we can complete one season of football, I think that would be a step in the right direction. That will give fans a little more confidence in this venture. That’s my short-term vision—getting through season one and putting an exceptional on-field product out for display.

“Long term, everyone on the team at FOX and the USFL, we want to create a real dominant spring professional football product.”

Joseph Santoliquito is an award-winning sportswriter based in the Philadelphia area who has been writing for PhillyVoice since its inception in 2015 and is the president of the Boxing Writers Association of America. He can be followed on Twitter here: @JSantoliquito