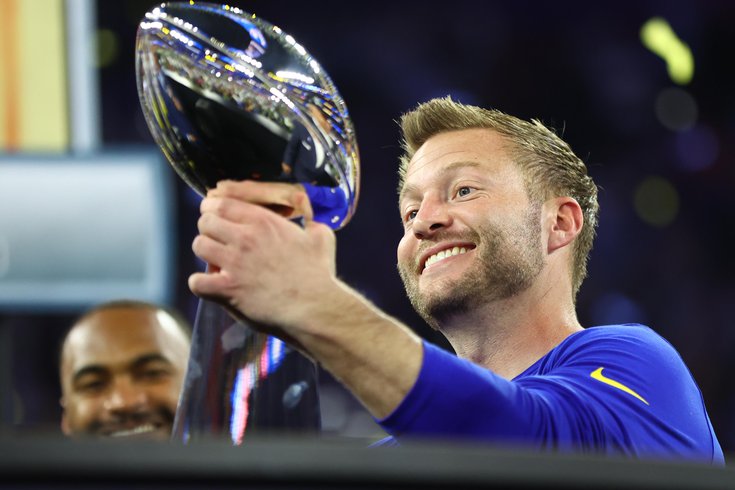 At 36, Sean McVay has been an NFL head coach for five seasons, taken his team to two Super Bowls, and snared his first Lombardi Trophy on Sunday night when the Los Angeles Rams fought back for a 23-20 comeback win over the Cincinnati Bengals in Super Bowl LVI.

And when Kevin O’Connell is officially named the Minnesota Vikings head coach early this week, he will become the fourth branch off the McVay tree joining Matt LaFleur of Green Bay, the LA Chargers’ Brandon Staley, and Zac Taylor, the Bengals’ mentor.

As far as the game itself, the NFL is typically all about the quarterbacks and both Matthew Stafford and Joe Burrow delivered, but the difference proved to be the Rams’ other superstars.

McVay’s team had arguably the best pure players on both sides of the football this season – triple-crown receiver Cooper Kupp and All-Pro defensive tackle Aaron Donald – and both delivered down the stretch for the Rams.

Kupp, who was named Super Bowl MVP, had four receptions for 39 yards on the go-ahead 79-yard drive, capped by a 1-yard fade from Stafford to the star receiver with 1:25 left. Meanwhile, Kupp managed to do all of that despite everyone in the $5 billion SoFi Stadium knowing he was getting the ball.

That’s because the Los Angeles running game was non-existent and the Rams came into the game down tight end Tyler Higbee and lost Odell Beckham Jr. in the second quarter to a knee injury. Robert Woods had long ago been lost and deep reserves Van Jefferson and Ben Skowronek just weren’t producing.

Once the Bengals did get down, it was Donald’s opportunity to tee off and he pressured Burrow on a 4th-and-1 near midfield that forced an incompletion to seal the game, his third QB hit of the game to go along with two sacks.

“Our best players stepped up in the most crucial and critical moments,” McVay admitted after the game.

The result means McVay has now lived up to his wunderkind reputation after an interesting week leading up to the game under a high-powered microscope placed on him and his team.

Former Bengals quarterback Ken Anderson had jumped on social media earlier in the week to muse about some of the differences between his generation of football and the current incarnation of the NFL leading up to the Super Bowl.

A former four-time Pro Bowl selection in an era where that kind of designation carried a little more weight, Anderson, now 72, reminisced about his Super Bowl experience in a time where the NFL was certainly a passion for many, just not the national obsession it is now.

So different from when I was in the SB
No cell phones
No social media
Had our media day Tuesday and nothing else
Found a pizza place about a mile from hotel for a couple of beers at night and nobody bothered us
That’s about as good as we could do in Pontiac, Michigan

For Anderson and his Bengals, Super Bowl Media Day was on Tuesday and it was just business as usual from that point forward in advance of Super Bowl XVI where Cincinnati came up short against the legendary Bill Walsh, Joe Montana, and the 49ers, 26-21, after the 1981 season.

Fast forward four decades and "nothing" has turned into a week-long celebration of the obsession, highlighted by an award show hosted by Hingle McCringleberry himself in which the NFL's stars get to play Hollywood heavyweights for a night and a halftime show that often gets more hype than the game itself.

The coaches are, of course, cognizant of all the distractions, and both McVay and Taylor preached focus, consistency and normalcy throughout the week.

The landmines in advance of kickoff are endless, some like Super Bowl Media Day still scaled-back a bit by COVID-19 but others like friends and family wanting to be a part of the festivities are a constant variable in what is a difficult equation.

"Trying to tell [my teammates] to keep it as normal as possible," Bengals safety Ricardo Allen, who played in Super Bowl LI while with the Atlanta Falcons, told PhillyVoice leading up to the game. "Yeah, it is bigger. We all know that. There's only two teams left playing.”

McVay seemed to step in one of the traps on Friday by making light of the grind NFL coaches go through, joking that he "won't make it" if he's coaching until he's 60.

When the inevitable follow-up came, it seemed to open up the floodgates for McVay a little bit as a human being struggling with work/life balance just like so many of the rest of us.

"I love this so much that it's such a passion but I also know that what I've seen from some of my closest friends, whether it's coaches or even some of our players," McVay said. "I'm gonna be married this summer, I want to have a family and I think being able to find that balance but also be able to give the time necessary. I have always had a dream about being able to be a father and I can't predict the future, you know?

“I jokingly say that."

That couching, along with McVay's age and opportunity to join the game's elite as a coaching heavyweights, had few grabbing the baton and running with the thoughts of the coach walking away early — but it's at least plausible because television is admittedly waiting with millions and an opportunity to stay close to the game.

John Madden called it a career at 42 with a .731 winning percentage, got into the booth and never looked back, becoming a far greater icon than he even could have been as just a coach.

Dick Vermeil "retired" in 1983 at 47 and spent 15 years calling college games before returning to the St. Louis Rams in 1997 and stamping what officially became a Hall of Fame resume on Thursday.

Jon Gruden, a one-time McVay mentor, stepped into the booth after being fired in Tampa as a Super Bowl-winning coach and spent a decade playing "Will He or Won't He?" before finally jumping back in with Raiders in 2018, something that flamed out amidst scandal earlier this season.

The larger point is that the template for McVay to hit pause already exists.

It was enough that Vikings fans, weaned on 60 years of disappointment, started getting skittish as they envisioned being jilted at the altar by O'Connell, who could have Josh McDaniels’d Minnesota if McVay shocked the world just like Jesse Ventura once did in the Land of 10,000 Lakes.

The hype gathered so much steam so quickly that McVay had to text NFL Network's Ian Rapoport on Sunday morning before the game.

"I’m committed to this team and coaching," McVay typed out.

From @NFLTotalAccess: No, #Rams coach Sean McVay won't be walking away after the Super Bowl. He texted me, "I’m committed to this team and coaching." pic.twitter.com/Mt9NImDf4f

To those who really understand the modern NFL landscape in the age of the "information broker," what was really going on was quite evident.

While eyes are always on the NFL, the biggest audience of all is Super Bowl Sunday and everybody wants their agendas out there.

The Super Bowl LVI @NFLGameDay Notebook with @MikeGarafolo and @TomPelissero: The #Bengals and Zac Taylor will work out a contract extension after today; The #Vikings will hire Kevin O'Connell & keep QB Kirk Cousins; The #49ers will try to trade Jimmy Garoppolo in the next month. pic.twitter.com/RndlQQYYk6

Not that McVay couldn't take a break from coaching when the cycle of talent on the Rams takes a negative turn — and that could begin with Donald walking away, a trial balloon the three-time Defensive Player of the Year floated through NBC’s Rodney Harrison.

For now, though, McVay just wanted to add some leverage to his potential Lombardi Trophy, and when Kupp and Donald delivered it was mission accomplished.

Both Super-Bowl head coaches, Sean McVay and Zac Taylor, both are in line for contract extensions this off-season, per league sources.

McVay has two more seasons left on his contract, Taylor is heading into the last season of his contract.

Winner today has even more leverage.