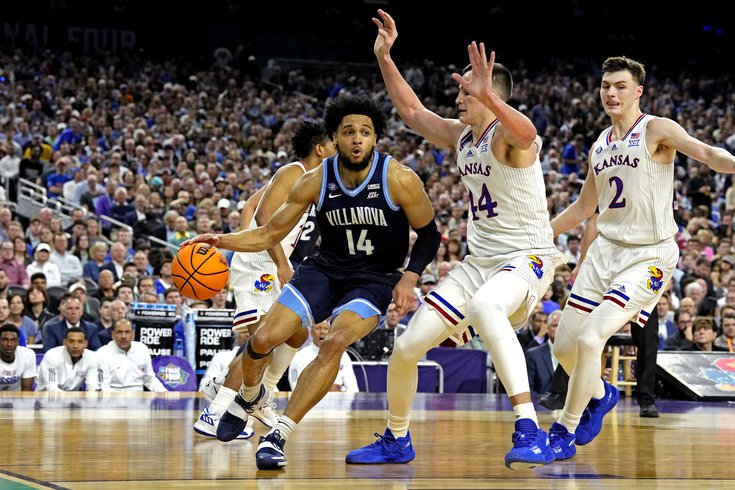 Villanova's Caleb Daniels drives to the rim against the Kansas Jayhawks in the Final Four.

It was a valiant run that saw Jay Wright take Villanova to the Final Four for the fourth time, but the Wildcats will leave the Big Easy without cutting down the nets. The Cats fell 81-65 in New Orleans to a top-seeded Kansas team who now advances to Monday's National Championship Game and will play the winner of the Duke and North Carolina matchup.

The Jayhawks exploded early. They had a 12-point halftime lead that felt like a 42-point lead. It could've gotten ugly, but props to Villanova for hanging tough shrinking that lead to single digits late in the second half. A 10-0 run from Kansas to start the game made it feel like, well, not a game at all, but it's no surprise to see a Wright-coached team fight so hard. The Cats were down a key cog in Justin Moore, fell prey to Kansas' physicality and just flat-out seemed gassed.

Villanova's small, guard-centric lineups have served them well this season. That's how you have a historic free-throw shooting season and destroy opponents with a barrage of threes. It has left them susceptible to teams with talented bigs though and the Jayhawks finally made them pay. Kansas' David McCormack, standing 6'10", made his presence felt. He had a monster first half, where the Kansas took their initial commanding lead that they never relinquished. He totaled 25 points and nine boards, crushing the Cats in the paint.

Kansas locked in on Nova's weakness and capitalized on it. They also beat the Wildcats at their own game.

Villanova was nailing shots from deep constantly, shooting 42.1 percent on 19 attempts. The Jayhawks out did them though, making 56.3 percent of their threes (16 attempts). Nova's Collin Gillespie was on fire, going off for 17 points and shooting 5-8 from beyond the arc. He showcased what he's been one of the country's best players this season. Kansas' Ochai Agbaji went "full Gillespie" in his own right, sinking six of his seven three-point attempts and finishing with 21 points. Whenever Nova went on a quick run to make things competitive, the Jayhawks were there to hit them with another dagger from deep again and again.

"Size prevails," Jim Nantz said during the TBS broadcast following an aggressive offensive rebound and put-back from Kansas in the second half. So does going supernova from three, out-gunning a team full of talented sharpshooters like Nova.

Sorry to the college kids up on the Main Line who won't have one of the biggest parties of the year tonight, but, hey, at least Nova fans have gotten to see the Cats turn into a "blue blood" program under Wright with their two championships in the last half-dozen years.