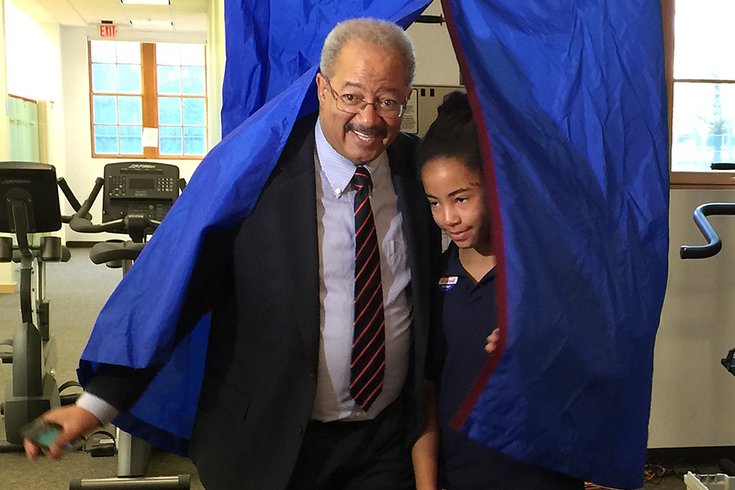 With a federal corruption trial scheduled to start in the coming days, Fattah was as confident in victory as earlier this month when he told PhillyVoice that his accomplishments in office will outweigh three competitors and the stories labeling him an “embattled” legislator. Fattah has represented the 2nd Congressional District since 1995.

“It’s a great morning,” he said, greeting voters outside the polling place on the William Penn Charter School campus.

Once inside, he and his wife signed their names in the voter rolls and headed into the voting booths. He emerged with two thumbs up for awaiting photographers.

Later, he said that every Election Day is different than the campaign insofar as the time for pitches is over.

“The voters will speak their mind today,” he said of his primary race against state Rep. Dwight Evans, Dan Muroff and Brian Gordon.

His “Victory Celebration” will be held at National Union of Hospital and Health Care Employees District 1199C’s Union Hall on Tuesday night. This isn’t a coincidence, he said, as the union was the first to endorse him in his initial campaign for Capitol Hill.

After a transit stop at 52nd and Market streets in West Philadelphia on Tuesday morning, he’ll head over to the Center City hall to see off 35 vans of get-out-the-vote volunteers. That effort, he said, spoke to their commitment to what he’s accomplished in Washington, D.C.

“Our family is eager and energized by today, and we’re looking forward to a great victory party tonight. … We have 22 years of seniority in a place where seniority is everything. You can’t see anything in our city where we haven’t been helpful," he said.

"We delivered real results for the city of Philadelphia.”